How many nurses does it take to run a hospital?

Legislatures in at least seven states and the District of Columbia are trying to answer that question as they debate bills that would require hospitals to have a minimum number of nurses on staff at all times. 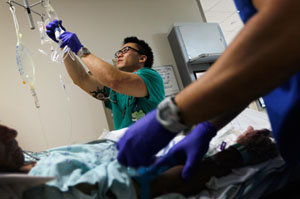 Registered Nurse Tung Tran hangs an I.V. bag for a patient at the University of Miami Hospital’s Emergency Department in 2012 in Miami. California is the only state that has a minimum nurse staffing law, but at least seven other states are considering adopting their own versions (Photo by Joe Raedle/Getty Images).

So far, only one state has such a law. California’s state legislature passed a minimum nurse staffing law in 1999. Since then, similar nurse staffing laws have failed in every other state where they were proposed. But the nursing unions backing the bills have grown increasingly powerful in statehouses across the country.

Hospital administrators are vehemently opposed. They argue the bills would strip them of their ability to make basic staffing decisions and be a financial burden. Many nurses and nursing unions say legislation is needed to prevent cost-conscious hospitals from endangering patients by putting too large of a workload on too few nurses.

“Hospitals right now are run like businesses and they’re focused on the short-term bottom line,” said Jeff Breslin, president of the Michigan Nurses Association, a union backing a minimum staffing bill in the Michigan legislature. If the bill becomes law, he said, “it doesn’t matter what part of the state you’re in, you can be assured you’re going to have adequate nursing care whatever place you’re going into.”

Lawmakers in D.C., New York, Texas, Florida, New Jersey, Iowa and Minnesota are also considering legislation. While the language differs across the states, at the heart of all these bills is a minimum nurse-to-patient ratio — a fixed number of nurses per patient.

The bills call for a different ratio in different parts of a hospital. For example, the proposed law in Michigan would require hospitals to maintain a one-to-one ratio — no less than one nurse for every patient — in all operating rooms across the state. In pediatric units, that ratio can go as high as one nurse for every four patients.

A 2004 survey of research conducted by the U.S. Agency for Healthcare Research and Quality found that patients at hospitals with low nurse-to-patient ratios fare worse than those at hospitals with higher ratios. But nursing and hospital advocates say there is scant research on what the ideal ratios should be, and there are conflicting studies about whether mandating a ratio by law ultimately improves patients’ health, according to hospital and nurses’ groups.

“We’re trying to create a standard where hospitals will be required to have adequate staffing levels,” said Dawn Kettinger, a spokesperson with the MNA. “It would be great if hospitals did this on their own, but unfortunately they’re not doing that.”

Joyce Young, a nursing administrator with St. Joseph Mercy Health System in the Detroit area, said many hospitals are, in fact, creating minimum staffing levels on their own, especially now that they’re penalized for certain negative patient outcomes under the federal health law.

“Hospital nursing leaders are in positions such that they can be able to determine staffing levels,” Young said. It shouldn’t be “based upon a legislator who mandates a number. It should be left to the nurses.”

Today, only California requires all of its hospitals to maintain a minimum nurse-to-patient ratio. If a hospital sees a surge of patients due to something unexpected, like a car crash or an outbreak, it still must meet the minimum ratio. The only time a hospital can go under the minimum ratio is during what the statute calls a “healthcare emergency.”

Jolee Cochran, a registered oncology nurse who has been working at Cedars-Sinai Medical Center in Los Angeles for 26 years, said the law has made her job more manageable. Before, she said, it wasn’t uncommon for a nurse to be responsible for seven patients at a time. Now, it would be a violation of the law for her to have more than five patients under her care.

Cochran said patients in her hospital are much sicker than they used to be and require much more complex care. “I can’t imagine having more than five patients with one nurse, with the type of patients we have now,” she said.

But she also said the law has made scheduling shifts more challenging. Because the staffing ratios in California apply at all times, if a nurse goes on a break, “there has to be someone there to cover you,” Cochran said. “By law, you can’t fudge that or else you get fined.”

Jan Emerson-Shea, vice president of the California Hospital Association, agreed with Cochran that the law’s rigidity – its “at all times” clause – is a major problem for health providers in the Golden State. She also said the ratios written into the law in California were merely a political compromise that had no basis in scientific evidence.

However, Emerson-Shea said hospitals in her state have slowly learned to live with the law.

What was a major victory for nurses in the Golden State 14 years ago has been followed by a string of defeats elsewhere. “Hospitals go to holy war to prevent it,” said Chuck Idelson, a spokesman for National Nurses United, a 185,000-member labor union founded four years ago in California.

NNU is the primary backer of the staffing ratio bills currently working their way through various state capitols. However, not all nurses back the union’s legislative push.

The American Nurses Association, a professional trade group that advocates on behalf of both unionized and non-unionized nurses, opposes staffing ratio bills. Janet Haebler, the association’s director of state government affairs, said she doesn’t expect any others will pass this year.

Haebler said understaffing is a major problem, but that calcifying a nurse-to-patient ratio into law isn’t the right way to solve it. The association instead favors laws that require hospitals to set up committees made up of nurses and administrators that work together to create staffing plans.

“We’re respectful of all approaches as long as nurses have input,” she said. “In California, there’s no input. It’s just … ‘This is what it will be at all times.'”