When Paul Ormond signed John Mitchell into a nursing home in Dennis, Mass., in June, he was handed a few dozen pages of admission papers. Ormond, Mitchell’s legal guardian and an old friend, signed wherever the director of admissions told him to. 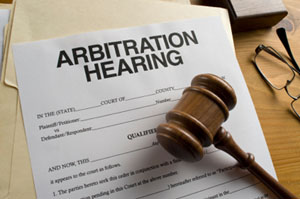 He didn’t realize that one of those documents was an agreement that required Mitchell and his family to take disputes to a professional arbitrator rather than to court.

Mitchell had been institutionalized since suffering a stroke in 1999. During a hospital stay early this summer, Mitchell, then 69, had received a tracheotomy and needed to switch to a nursing home that could accommodate him.

A few weeks after Mitchell arrived at the new nursing home, staff members dropped him while using a lift device to move him from his bed to his chair. An ambulance was called and then canceled as his vital signs stabilized.

Later that night Ormond, 63, got a call from the nursing home that Mitchell was unresponsive. Mitchell was rushed to the hospital, and doctors found that the fall had caused extensive bleeding on his brain.

He died a few days later.

Mitchell’s sons hired a lawyer to look into the circumstances surrounding their father’s death. That was when Ormond learned that amid all the admissions papers he had signed was an arbitration agreement.

“I thought it was deceptive, and I was pretty angry that I’d been tricked into signing something that I didn’t know what it was,” says Ormond.

A mandatory arbitration agreement is an often overlooked document tucked inside the package of admissions documents at many nursing homes these days. It can have an outsize impact if something goes wrong. But anxious seniors or their caregivers often sign every document that’s put in front of them, perhaps only glancing at the content.

Signing an arbitration agreement means that in the event of a problem that is not amicably resolved — Mom slips on a wet floor and breaks her hip, say, or Dad wanders off the premises and gets hit by a car — you agree to bring the dispute before a professional arbitrator rather than file a lawsuit for negligence or wrongful death, for example.

Agreeing to arbitrate is generally not in families’ best interests, say consumer advocates. For one thing, it can be pricey. In addition to hiring a lawyer, the patient or family generally has to pay its share of the arbitrator’s fee, which may come to hundreds of dollars an hour, says Paul Bland, a senior attorney at Public Justice, a public interest law firm based in Washington.

Court proceedings are also conducted in a public courtroom and leave a detailed public record that can inform industry practice and help develop case law, say experts. Not so with arbitration hearings, which are conducted in private and whose proceedings and materials are often protected by confidentiality rules.

The amount awarded — if any — may also be less if an arbitrator hears the case than it would be if a case went to trial, say experts.

The study was conducted with the American Health Care Association, which represents 11,000 long-term-care facilities. According to the report, “loss rates” — reflecting the dollar value of liability claims paid — are increasing 4 percent annually.

“Liability costs for providing care have grown and escalated” in recent years, says Greg Crist, a spokesman for the association. Arbitration agreements help keep a lid on those costs, he says.

That may explain why arbitration agreements have become much more common in nursing homes, experts say. The agreements are increasingly used in assisted living facilities as well.

Arbitration can also benefit patients and their families, Crist says. Claims are typically resolved more quickly than court cases, he says, so attorney costs are lower and patients can retain a larger portion of any financial settlement.

The Federal Arbitration Act, enacted in 1925, allows for two sides in a dispute to agree to binding arbitration to resolve their differences. If a dispute arises and an arbitration agreement is in place, the arbitrators are jointly selected by the patient and the nursing home.

Although consumers usually don’t realize it, there’s a simple way to avoid being forced into arbitration, say experts: Don’t sign the arbitration agreement.

If you do sign and then wish you hadn’t, arbitration agreements typically have a 30-day “opt-out” provision that allows you to change your mind and retain your rights to sue.

The judge in John Mitchell’s wrongful death case threw out the agreement on the grounds that it was “unconscionable,” a legal term used to describe contracts that are unfair or unjust.

“The judge agreed it was too much to expect me to digest all of this information at once, and that the arbitration clause hadn’t been explained thoroughly,” says Ormond. A trial date hasn’t yet been set.

Arguing that an agreement is unconscionable is one of the few ways people can extricate themselves from arbitration agreements once a dispute arises, says David Hoey, a North Reading, Mass., lawyer representing the Mitchell family. Another possibility is to prove that the person wasn’t competent to sign an agreement or that the family member who signed wasn’t legally qualified to do so.

Better yet, experts agree, is not to sign in the first place.