Two years ago, Dorothy Holmes, then 75, was in the cozy pink bathroom of her mobile home getting ready to shower when she fell. It’s the type of accident that’s pervasive among older Americans – and it’s often the very thing that triggers the end of independence.

“I got a big spot on my head, it almost conked me out,” Holmes said in her soft voice. 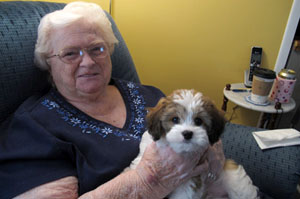 Dorothy Holmes, back home, with her new dog Jack. A Medicaid program called “Money Follows The Person” helped Holmes go home from the nursing home after a fall (Photo by Martha Bebinger/WBUR).

She heard her husband come down the hall, “and when he turned the corner all I heard was, ‘Oh God, honey, what did you do now?’ After that I don’t know anything cause I passed out,” Holmes recalled.

Holmes spent almost three months in a hospital. Her heart stopped a few times, she had breathing and memory problems, and doctors removed an ulcer as big as a grapefruit.

These days, patients are often transferred from a hospital to a nursing home to recover. But, then, some never leave.

“The only thing I worried about was not getting out,” Holmes says now. She kept asking her husband and one daughter: “‘You’re not going to keep me here are you?’ ”

Holmes worried that her children and her husband wouldn’t be able to handle her ongoing need for care at home in Belchertown, Massachusetts.

“That was before Martha [Napierski] came into it and told us all we could get for help,” Holmes said.

Napierski, a case manager at WestMass Elder Care in Holyoke, Mass., drew up a plan for Holmes’s transition.

“We made sure she had home-delivered meals, personal care, homemaking seven days a week, sheets she needed for her bed and skilled nursing,” Napierski explained. “She also had physical therapy and occupational therapy.”

Napierski says Holmes would not have gone home without this help, buoyed by money the federal government is giving states for a Medicaid program called Money Follows the Person. The program identifies patients, old and young, who’ve been in a nursing home for at least 90 days but don’t really need to be there. Massachusetts is one of 45 states and the District of Columbia in the program, created by the Deficit Reduction Act of 2005.

The program was supposed to end in 2011, but was extended as part of the 2010 federal health law, the Affordable Care Act.

Not ‘One Size Fits All’

Holmes was a relatively easy patient to transition because she had a place to return to and family who could help with her care. In many cases, Napierski starts from scratch. Finding housing for patients who have given up their homes is the hardest part. Then Napierski shops for appliances, some basic furniture, a few plates and cups.

That may sound logical, but there’s no proof of savings or happier patients yet. The program is off to a slow start.

Massachusetts had hoped to have more than 1,000 men and women enrolled by now. It has 306. Community agencies are still waiting for final rules for what and how they’ll be paid — what’s covered and which patients will qualify. The state has to establish connections in the program between housing, mental health, transportation and other departments.

“There is a fairly steep learning curve for most programs” across the country, said Carol Irvin, a senior researcher at Mathematica Policy Research, who is evaluating Money Follows the Person.

And resettling patients who are used to life in a nursing home can be hard.

“It’s a very complicated program for a variety of reasons,” said Dr. Julian Harris, the Medicaid director in Massachusetts. “It’s not a process that’s sort of a one size fits all.”

Putting together all the things a patient may need such as a guard dog, the right home care, home renovations or rides to appointments, is challenging, according to Harris.

But, he added, “this administration has really made a commitment to making home and community based services possible.”

The commitment goes back to a 1999 Supreme Court decision in Olmstead vs. L.C. It said that state Medicaid programs have to pay for home care as long as it doesn’t cost more than a nursing home or some other institution.

It will be several years before supporters of this program will be able to say if it saves Medicaid money and whether participants are better off. But Dorothy Holmes is sure – she’s really glad to be back home.

“It just means everything to me,” Holmes said as a new puppy, Jack, jumped onto her lap. “My life is back, almost the way it always was.”

Holmes is frustrated that a leg she injured in her fall is still not strong enough for walking any distance or climbing stairs. She’s fine at home, but she wants to get out more, especially to visit a new great-granddaughter – her fourth great-grandchild.

This story is part of a collaboration among NPR, WBUR and Kaiser Health News.