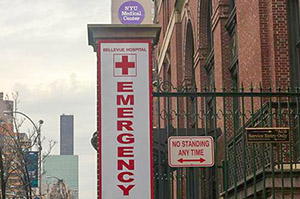 Patterns can be difficult to discern, and can vary from procedure to procedure. Overall, academic medical centers are more costly because of the additional staff needed for medical training, the greater use of technology, and the severity and complexity of patients. But those factors do not account for why at Westchester Medical Center, the median charge for a vaginal delivery is $22,143, and at New York Presbyterian Weill Cornell Medical Center, it is $11,900.

The Greater New Hospital Association said the information is “complex and can be confusing,” because “hospital charges do not reflect the far lower payments hospitals actually receive for the services they provide.” Medicare and Medicaid reimburse much less than what hospitals charge, and insurers and managed care companies also negotiate rates that have little to do with what hospitals ask to be paid.

People without insurance, however, are subject to these sticker prices. In practice, hospitals typically work out some kind of payment plan less than the charged amount and write off losses – but the payments can still be onerous.

Dr. Fred Hyde, from Columbia University’s Mailman School of Public Health, said the relationship between charges and underlying costs is tenuous at best.

“To a large extent in the hospital field, we take our charges in accord with what we think we’re going to be paid, not in any relationship to the cost of goods sold or the combination of wages and materials, or anything else that would go into a genuine cost measurement,” said Hyde, a physician who has been the head of two hospitals and a managed care company.

Experts say patients trying to evaluate potential hospital charges for upcoming treatments should use the state database cautiously, if at all, because the charges listed are likely to be only loosely connected to the prices a patient will see. Instead, patients should try to get information about their out-of-pocket expenses in advance from the hospital and insurance carrier — though in practice that can be difficult, if not impossible.

Making medical costs more transparent is a goal for both consumers and the institutions that pay for most medical treatment, insurance companies and the federal government.

Suzanne Delbanco, from the Catalyst for Payment Reform, said New York and the rest of the country should look to New Hampshire as a model. Its state website allows consumers to plug in their insurance plan, hospital and procedure and get an accurate projection of real out-of-pocket costs.

In the meantime, she said, people should avoid falling into the trap of assuming places that charge more provide better care.

James Tallon, from the United Hospital Fund, said he hopes the newly released data will illuminate the true underlying costs of medical procedures and the wide variations in charges – perhaps eventually making the case for a return to stronger price controls that were in place before deregulation in the 1980s.

“That’s an open political question – we’re nowhere near that now,” Tallon said, noting that New York “some three decades ago felt it perfectly reasonable public policy to standardize all these rate-setting decisions.”

New York Data Show Hospital Charges All Over The Map