This story is part of a partnership that includes WNYC, NPR and Kaiser Health News.

No single municipality in the country suffered more in the first wave of the pandemic than New York City, which saw more than 24,000 deaths, mainly in the spring. Medical staff in New York know precisely how difficult and dangerous overwhelmed hospitals can be and are braced warily as infections begin to rise again.

Around the New York metropolitan area, public health leaders and health care workers say they’re watching the trend lines, as intensive care units fill up in other parts of the United States and around the world. They say it gives them flashbacks to last spring, when ambulance sirens were omnipresent and the region was the country’s coronavirus epicenter.

There is wide agreement that hospitals and care providers are in much better shape now than then, because there is much more knowledge about the disease and how to handle it; much larger stockpiles of personal protective equipment; and much, much more widespread testing.

But at the same time, many front-line workers are nervous about hospital preparedness, and many observers are less bullish about the effectiveness of the coronavirus testing and tracing infrastructure.

“I think there’s a lot of anxiety about doing this a second time,” said Dr. Laura Iavicoli, head of emergency preparedness for NYC Health + Hospitals, the country’s largest municipal hospital system. Iavicoli is also an active emergency room physician at Elmhurst Hospital, in Queens, which came to be called “the epicenter of the epicenter” back in April. Still, she has enormous confidence in the staff of the municipal hospital system.

“They will rally, because I know them,” she said. “I’ve worked with them for 20 years, and they’re the most amazing people I can possibly speak of, but there’s anxiety and there’s COVID fatigue.”

Iavicoli said some of the city’s hospitals are at capacity, but she hastened to add that she’s not talking about “COVID capacity” — meaning not all the beds and recently reconfigured spillover spaces for COVID patients are full. Rather, she said, two of the network’s 11 hospitals have had to transfer ICU patients to others to make room for incoming patients.

“We are doing a little bit of redistributing around the system to give them COVID capacity, but it’s very manageable within the system,” Iavicoli said. “The increase is definitely typical in flu season, but knowing that we have just entered upon the second wave [of COVID-19] and predicting what is to come, we’re a little even more cognizant than normal to make sure we leave capacity in all of our facilities.”

Many nurses, however, say hospital administrators have not learned enough from the experience in March and April.

“We’re scared because we’re afraid we’re going to have to go through this again,” said Michelle Gonzalez, a critical care nurse at Montefiore Medical Center, in the Bronx, and a union representative for NYSNA, the New York State Nurses Association.

She said that in her unit nurses typically handle one or two intensive care unit patients at a time — but now have to handle three, with the number of COVID patients creeping up once again. Tending to four patients or more was common at the peak of the pandemic surge. Gonzalez said that’s overwhelming. If one patient crashes, several nurses need to converge at once, leaving other patients unmonitored.

“When we start to get triples with the frequency we’re seeing right now, we know it’s because we’re short-staffed, and they’re not getting ICU nurses into the building,” she said at a demonstration that featured a phalanx of nurses marching from Montefiore to a nearby cemetery, bearing floral wreaths for fallen comrades, while a band and bagpiper played “When the Saints Go Marching In” and “Amazing Grace.”

A spokesperson for the union said Montefiore, by its own reckoning, has 476 vacant nursing positions — a number that has climbed by nearly 100 since 2019. 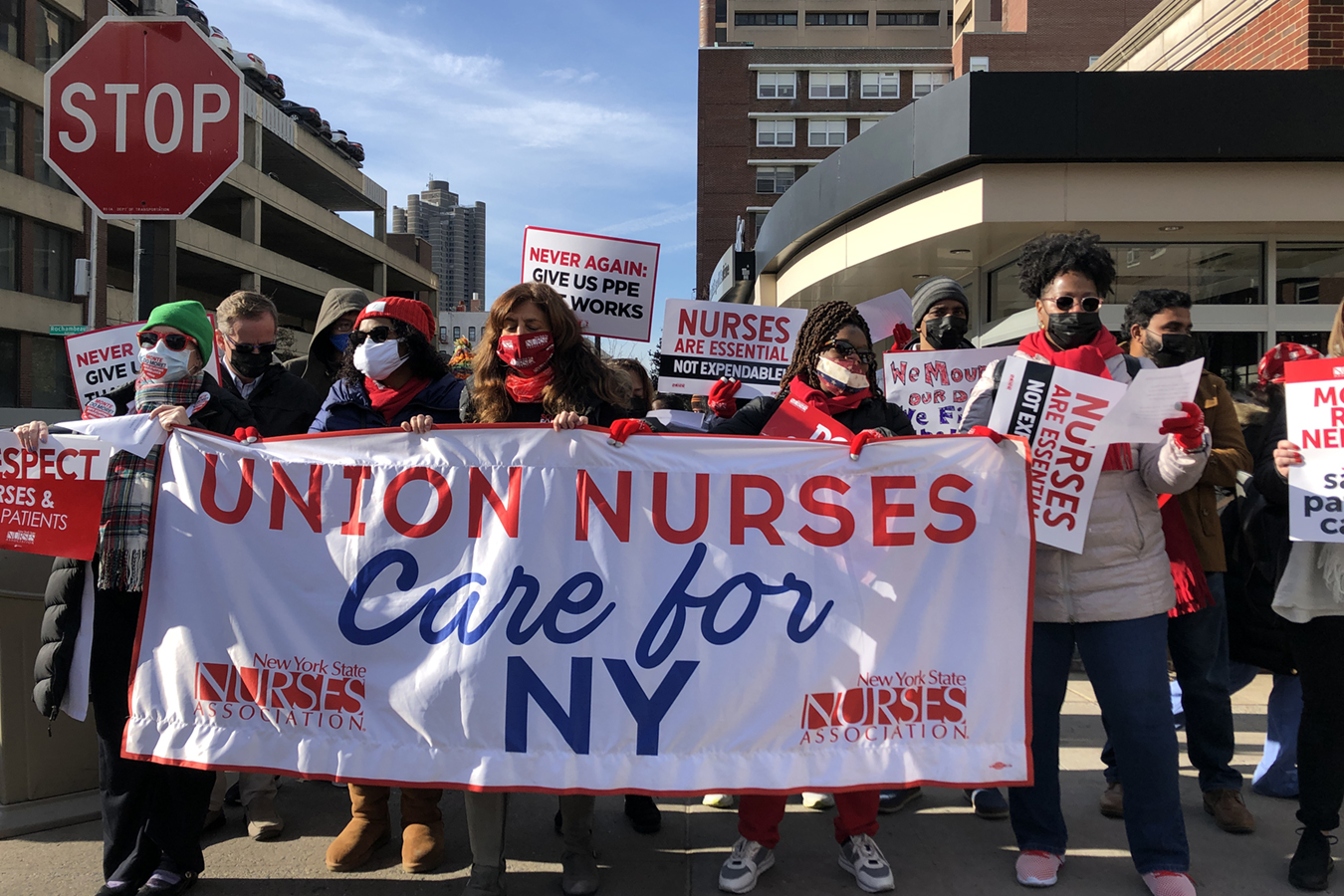 Nurses at Montefiore Medical Center, represented by the New York State Nurses Association, protest what they say is a staff shortage at several of the network’s hospitals in the Bronx and nearby suburbs on Nov. 19, 2020.(Fred Mogul/WNYC)

“Management is not living up to their promise to fill vacancies and hire nurses,” said Kristi Barnes, from NYSNA. “As of last week, they have 188 full-time nursing jobs they have not even posted, so there is no way they can be filled.”

“We have a contractual agreement with the union, and we meet the contractual obligations of that agreement,” said Peter Semczuk, senior vice president of operations. “We tailor our staffing in such a flexible way to meet the needs of the patient.”

Like many hospital systems, Montefiore relied heavily on temporary staffing agencies for “traveling nurses” from around the country earlier this year. Hospitals are preparing to do so again — but there is demand all over the country.

“They got us travelers in April, but that was four or six weeks in, and until that we were on our own,” said Kathy Santoiemma, who’s been a nurse at Montefiore New Rochelle for 43 years. “I don’t even know where they’re going to get travelers now — everyone around the whole country needs travelers.”

NYSNA led a two-day strike at Montifiore New Rochelle on Tuesday, after contract negotiations in the works for two years stalled on Monday.

Iavicoli said each of her network’s facilities has submitted requests, so that NYC Health + Hospitals could place a preliminary order now.

Health planners are hoping New Yorkers won’t flood into emergency rooms this time. They point to the modest climb in COVID hospitalizations over the past two months compared with other areas, including New Jersey and Connecticut. One thing they hope will keep the curve relatively flat is testing, which is more pervasive in New York than almost anywhere else in the country. About 200,000 people across New York state are getting tested each day, roughly one-third of them in New York City.

He said mass testing works on two levels — by highlighting which areas are hot zones, so health workers can target residents with “hyper-local” messages about COVID-19 spread, to get them to change their behavior, and also by allowing contact tracers to communicate individually with newly infected people.

“Once someone tests positive, we very quickly help them isolate,” Chokshi said. “We do an interview with them to know who their close contacts are, and then we call those contacts and make sure they’re quarantining as well.”

However, the city’s contact-tracing program has had a mixed record. The people it reaches say they’re staying put — but fewer than half of them share names of people they might have exposed. Denis Nash, an epidemiologist who previously worked for the city’s Department of Health and Mental Hygiene and the Centers for Disease Control and Prevention, said the city hasn’t successfully drilled down into how the coronavirus actually spreads, because contact tracers aren’t asking people enough questions about their behaviors and possible exposures.

“During the summer and early fall, when things were slowly ramping up, there were missed opportunities to use contact tracing to talk to 80 or 90% of all newly diagnosed people, to understand what their risk factors were and what kinds of things … were they exposed to that could have potentially resulted in them getting the virus,” he said. “You can never know with 100% certainty [where they contracted the virus], but if you ask these questions, you could begin to understand what some likely patterns were — for example, of public transportation use, or working in office buildings that didn’t have rigorous safety protocols, or indoor dining.”

This knowledge, though imperfect, could lead to better informed public policy decisions, Nash said, about whether to close indoor restaurants, beauty salons or fitness centers. Without that data, leaders are just making guesses.

Others fault the city’s testing and tracing program for not reaching out enough to poor communities of color — which suffered disproportionately during the first COVID wave. Chokshi, the health commissioner, said getting testing sites to these neighborhoods has been a priority — but a recent analysis suggested it’s not working as well as the city intended.

“Testing is really, really needed, not only to protect the most vulnerable, but to collectively try and get a handle on COVID and reopen New York City,” Lieberman-Cribbin said.

Personal protective equipment, or PPE, is also much more ample than it was last spring but, similarly, remains a source of contention.

New York state health authorities are requiring hospitals to stockpile a 90-day supply of PPE; for nursing homes, it’s 60 days’ worth. Many facilities have complied with September and October deadlines, but others have not.

Montefiore, NYC Health + Hospitals, and other large hospital networks say they have at least that much, if not more.

Nurses, though, say they should be able to get fresh N95 masks each time they see a new patient, to limit the risk of contamination. Many administrators counter that isn’t feasible, given the precariousness of the supply chain. They note that CDC guidelines permit “extended use” of some PPE.

“[Nurses and other caregivers] change their gloves between every patient, but they might wear the same N95 mask for one shift and put a surgical mask over it just to preserve it and only switch it out if there’s some integrity issue or it gets contaminated,” said Iavicoli, of the city hospital system. “But definitely at the next shift, they’re getting a new one.”

Iavicoli acknowledged the challenges as the pandemic rolls on and said there are four kinds of days: “blue skies, or normal,” “busier than normal,” “a little stretched” and “extremely stretched.”

“I think we’re at the top end of ‘busy normal’ bordering on ‘a little more than overstretched,’” said Iavicoli.

This story is from a reporting partnership that includes WNYC, NPR and KHN.

NYC Hospital Workers, Knowing How Bad It Can Get, Brace for COVID 2nd Wave