At a closed White House meeting in April, President Barack Obama told corporate insurance bosses “we’re all in this together” on implementing his signature health law. But some insurance companies seem to be more in than others. 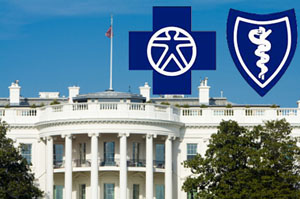 At least five Blue Cross and Blue Shield executives sat at the table of about a dozen CEOs with the president, according to those knowledgeable about the session, first reported by the New York Times. Just as significant is who wasn’t there: chiefs of the country’s biggest and third-biggest health insurers, UnitedHealth Group and Aetna.

Those two and most other non-Blue insurers “seem to be proceeding cautiously” in the online marketplaces expected to cover to millions, said David Windley, who follows the industry for Jefferies & Co., an investment firm. “They are evaluating markets state by state and in some cases region by region within the state to assess the viability of all the different pieces.”

Not the Blues. They’re expected to offer health-exchange plans nearly everywhere, ensuring at least a minimum choice for individuals seeking subsidized coverage when the marketplaces open Oct. 1. It also makes them an undeclared Obama ally in implementing the health law.

“The Blues will definitely participate,” said Ana Gupte, an insurance stock analyst for Dowling & Partners. “If there is an exchange I’m sure there will be the Blues.”

The exchanges are online marketplaces that will operate in all 50 states, offering insurance plans for individuals and small businesses. The individual market has long been a high-risk, unstable business that some insurers never sought. The health law – with its mandate that could bring younger, healthier people into the pool and its subsidies – seeks to stabilize the individual market. But if few other insurers follow the Blues into those markets, consumers in those states may not see the same kind of competitive pricing of premiums that states like Oregon have reported.

Still, it’s not just that Blues will offer coverage in places other carriers may avoid. In states where Republican governors oppose the health law, Blues may be the single biggest factor in educating consumers and recruiting them into Obamacare.

In Louisiana, where Gov. Bobby Jindal has flatly said “we are not implementing the exchange,” the local Blues plan has organized community nonprofits, churches, chambers of commerce and food banks to get out the word on what will be a federally run marketplace there.

BlueCross BlueShield of Louisiana “is the driving force” behind the Louisiana Healthcare Education Coalition, launched in March, said Nebeyou Abebe, who works on consumer engagement at the Louisiana Public Health Institute. “I can’t think of any other entity in Louisiana that’s developing a massive campaign to educate people.”

Founded by hospitals and doctors before World War II, the Blues are a loose federation of nonprofit and for-profit plans with a history of selling coverage directly to individuals and families.

The Concerns Of Insurers

The Affordable Care Act requires exchange plans to cover anybody, no matter how sick, at regulated prices and often with large government subsidies.

Despite the prospect of millions of new customers and measures to cushion insurers with disproportionately high claims in the early years, carriers worry that the sick will be first to sign up while the healthy stay away. Fears grew after claims came in far higher than expected for temporary “high risk pools” that had been established by the law to cover the chronically ill until the full law took effect in 2014. The shortfall prompted the plans to close enrollment early.

“Insurance companies, very suddenly in my estimation, are getting very conservative and hesitant about being in the exchanges,” said Robert Laszewski, a Virginia-based consultant and former insurance executive. “All along everybody, including the companies, assumed they would be in a lot of exchanges.”

UnitedHealth Group’s recent disclosure that it would offer plans in only a dozen state exchanges marked new disappointment for those hoping the exchanges will generate vigorous competition and new insurance for millions. Previously United had said it would sell on as many as 25 exchanges.

The company will “watch and see” how exchanges work, “approaching them with some degree of caution,” UnitedHealth Group CEO Stephen Hemsley told analysts last month.

Aetna plans to offer individual exchange policies in 14 states and may reduce that if some states look unprofitable or unprepared, CEO Mark Bertolini said on a conference call in late April. On June 17 Aetna disclosed it would stop selling individual insurance in California, the most populous state.

For its part, Cigna will focus on making exchange plans work well in five states rather than spreading efforts more thinly, said Ray Smithberger, who’s in charge of the company’s individual business.

“What you see in the general market is just a hesitancy” over whether states will be technologically ready, he said in an interview. “With condensed time frames, it’s important that we provide the right connectivity to ensure we’re providing the best experience for the customer.”

Although not every state has announced online marketplace participants, the Blues characterize their approach very differently. “We expect Blue Cross Blue Shield plans will have a strong, reliable presence in the new exchanges,” said Alissa Fox, a senior vice president at the Blue Cross and Blue Shield Association. “We’ve been in this market for more than 80 years and we’ve been providing coverage in every zip code to everybody. We imagine we will continue to do that.”

The White House declined to release the full list of attendees. Nor does it comment “on the role of one company or provider” in implementing the health act, a spokeswoman said.

Blues aren’t the only alternative to national commercial insurers. In many states there are regional nonprofits such as Group Health Cooperative in the Northwest or Presbyterian Health Plan in New Mexico. But for health coverage sold directly to consumers — the kind that will be offered on the exchanges — Blues have the most members in a large majority of states.

Protecting that business is why Blues have little choice but to offer plans in the online marketplaces, analysts said. If they abstain, they risk losing those members. Once in the game, they need to recruit as many customers as possible to avoid signing a disproportionate share of the sick.

Florida Blue, which owns about half the market in that state for individual insurance, intends to use its 11 recently opened retail centers to get out the word and will rent temporary storefronts in key neighborhoods, said Jon Urbanek, senior vice president of commercial markets for the company. Florida Blue will double the size of its call center to 200 employees as October approaches, he said.

Like the Louisiana Blues, the Texas Blues are educating and recruiting exchange customers with little cooperation from the state. Texas and Louisiana are among 33 states leaving exchange implementation to the federal government amid questions about whether it has the resources to educate a broadly ignorant public.

The Texas insurer’s Be Covered Texas team includes Habitat for Humanity, diabetes groups, churches, social services nonprofits, the NAACP and community clinics — all putting out the Obamacare word in the state with the highest percentage of uninsured people in the country.

The campaign includes a Web site, a texting campaign and community events planned through the rest of the year. A Blues official recently spoke to the Houston congregation of Windsor Village United Methodist Church, which has more than 16,000 members. Food bank grocery bags bear printed information about health insurance. Barber shops are seen as health information hubs.

Be Covered Texas doesn’t mention Blue Cross, presenting itself as a grass-roots program. Health Care Services Corp., the parent of the Texas Blues, hasn’t disclosed how much it is spending on the Texas effort and similar outreach by its Blues plans in New Mexico, Illinois and Oklahoma, a spokesman said.

“I view this as a three-year project,” said Bert Marshall, president of BlueCross BlueShield of Texas. “I think the education piece is going to last well beyond this enrollment and well beyond the next.”

With his company holding more than half of the Texas individual insurance market, Marshall believes an early and extended campaign is a good investment. His competitors seem to have a different view.

“The Blue Cross plans… are going to be in the exchanges because it’s part of their DNA,” said Laszewski. “But the rest of the marketplace, if you go look at their block of individual business, it’s small, and it’s probably losing money.”