Ratcheting up the campaign to sell the health law, President Barack Obama delivered a speech Thursday touting how millions of individuals are already benefiting from its insurance rebates, and others who buy coverage online in states such as California, New York and Oregon will pay lower-than-projected premiums next year because of increased competition. 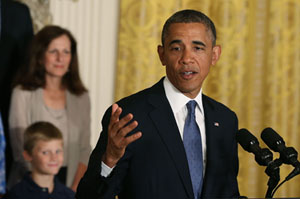 President Barack Obama speaks about the Affordable Care Act in the East Room of the White House Thursday (Photo by Mark Wilson/Getty Images).

“Consumers are getting a hint of how much money they’re going to save because of this law,” he said in the White House, surrounded by consumers who received refunds. “The Affordable Care Act is doing what it’s designed to do.”

The remarks piggybacked on the announcement Wednesday that New York regulators have approved health insurance rates for individual policies for 2014 that are half the cost of current policies on average.

The administration also released a report Thursday showing that individual premiums will be 10 to 18 percent less than projected next year, according to an average of rates in 10 states and the District of Columbia. Average costs for small business coverage will also lower in five of those states and D.C, where data was available, the report says.

Click here to watch the President’s comments on health insurance:

Proposed and final premium rates from California, Colorado, New Mexico, New York, Ohio, Oregon, Rhode Island, Vermont, Virginia, Washington and D.C. were included because they have been disclosed. However, those states are not necessarily representative of the country as a whole, since most are led by officials supportive of the law and are running their own insurance marketplaces. Rates in many states won’t be disclosed until just before the marketplaces open for enrollment on Oct. 1; policies will go into effect in January.

While the administration said the report shows the health law is working, there are other caveats: The premiums it cites may not reflect what individual consumers will actually pay next year since the numbers are averaged within and across states. As a result, some consumers in those states are likely to pay more than they do now, while others will see savings.

The analysis comes as the White House pushes back at critics of the health law, who have long said that its fees, broad benefit requirements and other rules will cause rates to skyrocket. On Wednesday, the Republican-led House of Representatives also approved largely symbolic legislation to delay the controversial mandate that most Americans carry health insurance.

“I recognize that there are a lot of folks in this town who are rooting for the law to fail,” Obama said. “We’re just going to blow through that stuff and keep on doing the right thing for the American people.”

The president said that millions of Americans are already benefiting from the law, partly through a provision that requires insurers to pay rebates to consumers if they fail to spend at least 80 percent of their premiums on medical care. This summer, an estimated 8.5 million consumers will get half a billion dollars in refunds, with the average family receiving $100 back, he said.

He was surrounded by consumers and small business operators who got rebates ranging from $136 to $320, which they used to pay their bills and invest in their companies, he said.

The administration’s study on premiums, meanwhile, got mixed reviews.  Some cautioned the report was of limited use since actual prices that consumers will pay are likely to range widely.

“The impact of the ACA will vary considerably depending on a person’s age, gender, health status, and where they live,” said Robert Zirkelbach, spokesman for the America’s Health Insurance Plans. “Simply looking at averages doesn’t tell you what these reforms are going to mean for a particular person in a particular state.”

Others believed it was effective messaging to those anxious about being able to afford insurance under the law.

“Anything that is good news for the law is helpful politically,” said Sara Rosenbaum, health policy professor at George Washington University.

The new premium rates do not affect the majority of Americans who receive insurance through their employers, only those who buy it on their own.

Plans sold in the new marketplaces must provide broad benefits, including hospital and prescription drug coverage. Policies will be grouped according to how generous they are in covering expected medical costs, ranging from platinum, which will cover the highest percentage of costs, down through gold, silver and bronze.

Senior administration officials said the analysis compared the rates submitted by insurers in those states and D.C. with projections from the nonpartisan Congressional Budget Office, which estimated the likely cost of family coverage in 2016.  The administration adjusted those CBO numbers to reflect the likely cost in 2014 for individuals, arriving at $392 a month for the lowest-cost silver plan, according to the the report. In nine states and D.C., the average cost was less than that, ranging from a low of $226 in New Mexico to $358 in Rhode Island. In Vermont, the average premium was higher, at $400 a month.

When looking at the second lowest cost silver plan — the benchmark to which subsidies are tied — premiums averaged 10 percent lower than projected across the states.

Comparing the new rates to the CBO projections is a valid way to consider changes the law will bring, say policy experts. “CBO is the gold standard of the projection universe,” said Shana Alex Lavarreda, director of health insurance studies at UCLA. “I can understand why HHS is rightfully pleased.”

Still, Joe Antos, an economist with the conservative American Enterprise Institute, said the data is unlikely to resolve longstanding disagreements about the law’s impact on premiums.

“The Republicans will say there is something wrong with numbers and it doesn’t tell you everything need to know,” said Antos. “The Democrats will say this proves the president’s plan is working.”

Previously, critics and supporters of the law have compared premiums of new policies to be sold in the online marketplaces with the cost of plans currently sold to individuals. But because current plans often cover fewer benefits – and insurers are not held to the new rules until Jan. 1 — such comparisons have been criticized as inaccurate ways to measure differences.

In addition, none of the analyses can say for sure how much an individual might pay, because rates will vary by age, geographic location — and by insurer. Also, most people expected to sign up for coverage through the new marketplaces are expected to qualify for sliding scale federal subsidies, which will offset some of the premium costs. Subsidies are available to people earning up to 400 percent of the federal poverty level, or about $46,000 for an individual.

Most of the rates considered in the HHS study are being submitted in states that will oversee their own marketplaces, rather than relying on an exchange run by the federal government. Some experts say those states might see lower-than-expected rates because insurers think they may be better equipped to market to younger and healthier people. Some of the state-run exchanges, such as the one in California, also negotiate rates with insurers, which can help push down premiums.

Rosenbaum, at George Washington, said the data show the exchanges are working as designed. “They are stimulating insurers to sell more but at a lower costs,” she said.

Antos said consumers will still be looking for more information.

“This is only addressing premiums, not the other two factors that really matter, which are will I get to see my doctor and what will it cost me out of pocket?”

Jay Hancock contributed to this report.