The Obama administration, rebuffed earlier this year by Republicans, is trying once again to convince Congress to provide more funding for the health law’s insurance exchanges, which are set to begin enrollment this fall.

According to figures released in the fiscal 2014 budget request Wednesday, the administration estimates that the federal government will spend about $4 billion on those federal- and state-run marketplaces for individual and small businesses purchasing insurance coverage. 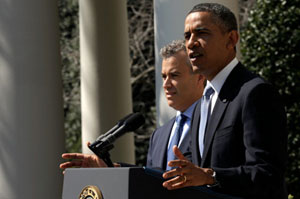 “This budget supports the operation of the federally facilitated marketplaces and provides for the assistance and oversight needs of the state-based and state partnership marketplaces as well,” Department of Health and Human Services Secretary Kathleen Sebelius said Wednesday. The money would fund exchange operations as well as education and outreach efforts, she said.

Obama’s budget for the year beginning Oct. 1 seeks $1.5 billion to run exchanges in the 26 states that have refused so far to set up their own exchange, as well as the seven states that are partnering with the federal government to run an exchange.

According to HHS, since 2011, 37 states and the District of Columbia received more than $3.4 billion in grants to operate exchanges. Obama’s budget request calls for an additional $2 billion in state grants in fiscal 2014.

The law provided generous subsidies to states that set up exchanges and it was widely assumed most states would do that. But when so many opted instead to let the federal government establish the marketplace, many advocacy groups expressed concern that the law did not provide adequate resources.

Earlier this year, federal officials asked Congress for $949 million to help fund the exchanges but the request was not included in the continuing resolution that funds the government through Sept. 30. Sebelius said the request for additional exchange funding is part of “an ongoing conversation with Congress.”

“As this act is fully implemented and Americans begin to take advantage of the benefits, I’m hopeful that Congress will see that this is the law of the land,” Sebelius said at a briefing on the budget. “The Supreme Court has ruled, there has been an election. We intend to implement the law and millions and millions of Americans are looking forward to the full implementation.”

At the briefing, Ellen Murray, HHS assistant secretary for financial resources, said despite not getting additional funds, the administration expects to spend $1.5 billion in the current fiscal year to fund creation of the federal exchanges. That money comes from several sources, including $235 million from the health law’s implementation fund, $116 million using Sebelius’ limited authority to transfer money between accounts and $450 million from a “nonrecurring expenses fund” that allows federal agencies to use dollars from prior years for one time information technology and real estate investments.

HHS this year will also draw on the law’s prevention fund for financing but Murray did not specify how much. “We’re still finalizing the final dollars,” she said.

So what happens if Congress does not give HHS the money it wants for exchange implementation in fiscal 2014?

“We certainly hope that Congress will come through with the funds,” Murray said. Either way, she said, “we’re determined to make these work.”