“This thing is working,” Obama said at a White House news conference in which he lambasted Republican critics of the health law, especially those in states that did not expand Medicaid eligibility, as the law allows.

“I’m sorry. I’m going to say one last thing about this — just because this — this does frustrate me, states that have chosen not to expand Medicaid for no other reason than political spite,” Obama said. “You got 5 million people who could be having health insurance right now, at no cost to these states — zero cost to these states – [yet] other than ideological reasons, they have chosen not to provide health insurance for their citizens.”

The actual number of people affected is 5.7 million, the administration said. Republican leaders in Florida, Texas and other states argue that even though the federal government is paying the full cost of expansion through 2016, costs in later years would still be too high a burden. They also say they don’t trust Congress to abide by the law and maintain full federal funding.

Administration data show 3.8 million people signed up for private plans in the past six weeks — compared to 4.2 million in the first five months after enrollment began Oct. 1.  Enrollment ended March 31, though people who had trouble signing up generally had until April 15 to sign up in the 36 states relying on the federal marketplace.

The number of young adults signing up over the past five months continues to lag expectations, which could affect insurance premiums next year. Still, the number of enrollees 18 to 34 years of age rose to 28 percent in the federal exchange, up from 25 percent in March, the administration reported.

The administration did not release a state-by-state enrollment breakdown, nor did it say how many have paid their premiums or what percent of the 8 million were previously insured. California officials separately announced that 1.4 million people have enrolled, more than in any other state.

Obama’s latest defense of the Affordable Care Act comes as the mid-term congressional campaign season is heating up. Republicans have made attacking the law a focus of many campaigns.

Obama said he is frustrated with continued Republican insistence on repealing the law.

“The point is, the repeal debate is and should be over,” he said. “The Affordable Care Act is working. And I know the American people don’t want us spending the next two-and-a-half years re-fighting the settled political battles of the last five years. They sent us here to repair our economy, to rebuild our middle class, and to restore our founding promise of opportunity, not just for a few, but for all.” 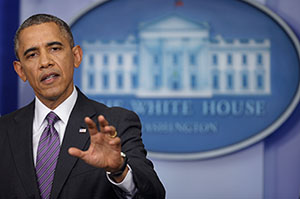 House Republican Majority Leader Eric Cantor of Virginia quickly challenged the enrollment data with a frequent Republican question about the law’s central mission. “I have a question,” he tweeted. “How many Obamacare enrollees were previously uninsured?”

Sen. Ted Cruz, a Texas Republican, tweeted: “The repeal debate is far from over.”

In California, state officials said their data confirmed what community activists have been saying since the start of open enrollment: in-person help is crucial.

Sixty percent of those enrolled through Covered California, the state-run insurance marketplace, did so in person, with the help of agents, county workers and certified counselors. Only 40 percent navigated the website alone, and even these people tended to seek out help from trusted sources of information, like call centers. Similar data for Medi-Cal enrollees isn’t yet available.

“While some people have enrolled on their own, everyone needs multiple touches,” Covered California’s executive director, Peter Lee, said at a news conference. “Everyone needs to hear the message multiple times, from multiple places, because health insurance has not been made simple and easy. It is confusing. People need help.”

In the coming months, Covered California will be diving into data on how people sought out help and bought insurance. The data, Lee said, will help the state better target campaigns and allocate resources during the second round of open enrollment, scheduled to start in November.

Obama spoke after separate meetings with insurance regulators from 44 states as well as insurance industry executives. While Obama said he hoped the insurance commissioners would continue to do their part to keep rates down for consumers, the officials responded that they would balance that responsibility with the need to keep insurers solvent, said Mike Chaney, Mississippi’s insurance commissioner.

Insurers will have to submit their proposed premiums for 2015 to state regulators from May 27 to June 27, though they will be able to revise them before the next open enrollment season starts Nov. 15.

Obama said at the press conference that premiums will keep rising next year—as they have for decades. But he noted since the law was passed in 2010, health spending increases have slowed dramatically.

Obama Sharply Criticizes Republicans As He Announces 8 Million Have Enrolled