President Barack Obama’s re-election ensures the survival of his landmark health care law, but predominantly Republican state officials will get a big say in how it is carried out.

State lawmakers will control whether millions of uninsured people get coverage through Medicaid beginning in 2014, as the law envisions. They’ll also decide whether to set up online markets where individuals can shop for coverage and seek federal subsidies to lower their costs.

Next year, 30 states will be led by Republican governors, and 24 will have Republican-controlled legislatures. Most of those had challenged the law in the Supreme Court.  Still, analysts believe the president’s victory will prod those, as well as several reluctant Democratic-led states, to move forward.

“Red states and undecided states [will] reconsider what they have been saying and doing the past few months,” said John Poelman, senior director of Leavitt Partners, a consulting firm advising states on carrying out the law, citing pressure from consumers, hospitals and other providers to expand coverage.

States have considerable sway over how the law is carried out because the Supreme Court gave them the power to reject the expansion of Medicaid, which had been expected to cover more than half of the 30 million people gaining health insurance under the law.

Since the court’s decision, six Republican governors in Texas, Florida, Mississippi, South Carolina, Louisiana and Georgia have said they will not participate, even though the federal government would cover the costs of new enrollees through 2016 and at least 90 percent thereafter.

If those governors follow through, they could significantly undermine the law’s goal of extending coverage to uninsured Americans.

Most analysts are betting that won’t be the case, however, because billions in newly available federal subsidies and intense lobbying by health providers and consumers will spur most states to reassess their positions. The most recalcitrant, such as Texas and Florida, may opt out initially.

“Not all states will expand Medicaid in 2014, but within a couple of years, all of them will have,” Poelman predicted. “That’s similar to what happened when Medicaid began in 1965. The program did not start in every state initially, but nearly all had it by 1970. Arizona was the last state to add the program in 1982.”

State lawmakers will also play a key role in deciding whether to expand Medicaid when they convene this winter and next spring.

“When state legislatures are back in session, we expect a flurry of attention to what the states will do,” said Richard Cauchi, health program director for the National Conference of State Legislatures.

Republicans will completely control 24 state legislatures next year — three more than this year. Democrats will control 18 — five more than they did this year. The rest are split or tied.

Mike Fasano, a Republican and one of the longest serving Florida lawmakers, said with the president’s win, the GOP-dominated state legislature would “take a hard look” at expanding Medicaid — despite the opposition of Republican Gov. Rick Scott.

Fasano, who is moving from the state Senate to the state House next year, said Florida can’t afford to miss out on new revenue without having its own plan to help more than four million residents who lack health insurance.

He acknowledged that challenging Scott would be an uphill battle but said the governor’s waning popularity might embolden lawmakers.

Officials in other states insist they will opt out of the Medicaid expansion regardless of the election outcome. “An Obama victory won’t change our strategy,” said Tony Keck, Medicaid director of South Carolina, although he acknowledged it might spur questions from the Republican-controlled state legislature.

Keck said the only way state officials might consider expanding the program is if they can scale back eligibility and benefits and require Medicaid recipients to pay more for their care — requirements the Obama administration has generally opposed.

Sandy Praeger, Kansas’ insurance commissioner and past president of National Association of Insurance Commissioners, expects many states to attempt to negotiate smaller Medicaid expansions than called for in the law.

Some, for instance, might propose expanding coverage to people who make up to 100 percent of federal poverty level ($23,050 for family of four), instead of the 133 percent ($31,000 for a family of four) required by the law. A more limited expansion would be cheaper for states that will have to start paying some of the bill in 2017. The administration has yet to say whether states can do a partial expansion.

The first battles are likely to be over the health law’s new insurance exchanges, which are supposed to make it easier to find an affordable plan and to help people in small group and individual insurance market determine if they qualify for new federal subsidies.

States have to give federal regulators a plan by Nov. 16 detailing how they will move forward with their own exchanges, with enrollment slated to launch next October. Under the law, the federal government would set up exchanges where states don’t.

As of late September, only 19 had begun setting up exchanges or agreed to do so in partnership with the federal government, according to an analysis by the Kaiser Family Foundation. (Kaiser Health News is an editorially independent program of the foundation.)

“It certainly will matter who is in the governor’s office for how states will approach the decision” on exchanges, said. Alan Weil, executive director of the National Academy of State Health Policy.

He noted that after Republican governors won in Maine and Wisconsin in 2011, both put the brakes on efforts to implement the law, which had been started by their Democratic predecessors.

But some governors who are worried about the costs are also concerned that if the federal government steps in, they may lose control over their insurance markets, said Krista Drobac, director of the health division at the National Governors Association.

Whether states that have stood on the sidelines until now can meet the tight deadlines to have the exchanges running by late next year is an open question. That timeline is also likely to be a challenge for the federal government which will have to review hundreds of insurance plans if it sets up the marketplaces in dozens of states. Consumers in federally operated exchanges may initially have fewer choices than in those run by states.

Praeger expects that Kansas and other previously undecided states will agree to partner with the federal government to move forward.

“I expect to see a lot of activity between now and Nov 16,” she said. “States will look at this more pragmatically to keep their options open.” 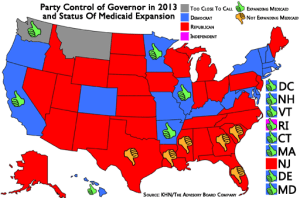