President Barack Obama appealed directly to Latinos on Thursday, telling them time is running out to sign up for health coverage this year and that they should enroll now to avoid problems. 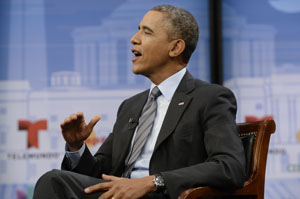 President Barack Obama participates in a town hall event on affordable health insurance for Latinos, at the Newseum on March 6, 2014 in Washington (Photo by Michael Reynolds-Pool/Getty Images).

Open enrollment in the health law’s online health insurance marketplaces closes March 31 for coverage this year and that date won’t be extended, Obama said during a town hall meeting in Washington, D.C. broadcast live on several Spanish-speaking media outlets. About one in four people eligible for coverage in the marketplace are Latino and their enrollment is seen as critical to the law’s overall success.

The event was hosted by the Asegúrate campaign, also known as “Get Covered,” a partnership between the California Endowment, Covered California, and America’s largest Spanish-language media organizations, including Univision, Telemundo, and La Opinion-impreMedia.

Noting that he has worked to help many Latinos afford college and stay in their homes during the recession, Obama urged Latinos to trust that he is working for their best interests. “You are not punishing me by not signing up [for coverage],” he said. “You are punishing yourself.”

He also stressed that the information required for sign-ups will not be shared with immigration agencies.  “You should feel confident … if someone in your family is eligible, you should have them sign up,” he said.

If too many people wait until the last few days of March to enroll, he cautioned that it could create logjams for the federal marketplace, healthcare.gov.

Obama said the law is working well, but that more states — particularly Florida and Texas — need to expand Medicaid eligibility so that  working class people can get coverage for little cost.  The Supreme Court upheld the law last year, but made the expansion of the government health program for the poor effectively optional for states. To date, 26 states have approved the expansion.

“I’d like to change the attitudes of some of the politicians who have been blocking it,” he said.

The law provides full funding for the expansion through 2016 to cover everyone under 138 percent of the federal poverty level, or up to about $15,800 for an individual. In later years,  states have to pick up some costs but never more than 10 percent.

Obama acknowledged that one of the administration’s biggest challenges is convincing healthy people that they should sign up for coverage. “The problem with health insurance is people do not want to pay for it until something goes wrong,” he said.

Obama’s appearance is part of a series of efforts  to engage the Latino community. On Wednesday, First Lady Michelle Obama visited the Jessie Trice Community Health Center, located in a heavily African American and Latino neighborhood in Miami, to plug enrollment efforts.

Obama Urges Latinos To Sign Up For Insurance Now