President Barack Obama said Tuesday he expected some “glitches and bumps” in the road to full implementation of his health care law.

“That’s pretty much true of every government program that’s ever been set up,” Obama said. “We’ve got a great team in place, we are pushing very hard to make sure that we’re hitting all the deadlines and the benchmarks.” 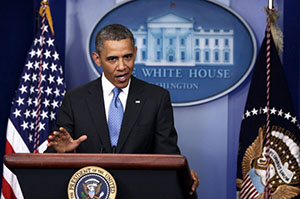 During the White House news conference, Obama also said the law is “pretty much already in place” for 85 percent to 90 percent of Americans who have health insurance. For those people, the law has made it possible for many adult children up to age 26 to stay on a parent’s health insurance plan and improved coverage of preventive health care services, he said.

“For the average American out there … who already [has] health insurance, this thing’s already happened,” Obama said.  “Their insurance is stronger, better, more secure than it was before. Full stop. That’s it. They don’t have to worry about anything else.”

For the approximately 10 percent to 15 percent  of Americans who either do not have health insurance or purchase their coverage on the individual market — about 30 million people, the law creates exchanges, or online marketplaces, where, beginning in October, eligible individuals and small businesses will be able to purchase coverage, with some qualifying for federal subsidies.

Earlier this month, Senate Finance Committee Chairman Max Baucus, D-Mont., who was one of the law’s key architects, said he anticipated a “train wreck” coming as the health law’s exchanges become operational, citing concerns from small businesses in Montana about how the law would work.

“The administration’s public information campaign on the benefits of the Affordable Care Act deserves a failing grade. You need to fix this,” he told Department of Health and Human Services Secretary Kathleen Sebelius during a hearing where he criticized the administration’s efforts. Other Democrats also have been critical of the law’s implementation so far, as have many Republicans.

Establishing the exchanges “is still a big complicated piece of business,” Obama said at the press conference, adding that political opposition from many Republicans makes the process even more difficult.

“When you’re doing it nationwide, relatively fast, and you’ve got half of Congress who is determined to try to block implementation and not adequately funding implementation, and you’ve got a number of Republican governors who know that it’s bad politics for them to try to implement this effectively … when you have that kind of situation, that makes it harder,” he said.

A new Kaiser Family Foundation tracking poll suggests that the Obama administration has a lot of work to do to make Americans aware of the health law and how it will work. Four in 10 Americans don’t know the law is still in place, and about half of the public says they do not have enough information about the law to understand how it will affect their family. (KHN is an editorially independent program of the foundation.)