For the patients and the employees of Mary’s Center, a community health center that serves Washington, D.C., and its Maryland suburbs, the 2010 health law had a big impact on business. The facility has always promised care to anyone who walks through its doors. But since Obamacare’s implementation, the patient population and the quality of care they receive has changed.

“The first set of patients we saw — it was like, ‘Wow, I can see a doctor for the first time. I can afford to go to the doctor,’” recalled Maria Gomez, the center’s president. “There were patients that knew they had tumors, or knew they hadn’t had a pap smear in a long, long time.”

Similar stories played out at many of the nation’s more than 1,400 federally-backed community health centers, according to two studies published today in Health Affairs. The research offers evidence that in states that embraced the health law, community health centers — which play a key role in providing health care to low-income people, often in medically underserved areas — further extended their reach. It also quantified the types of clinic visits and health services provided that resulted from the expansion.

These findings, though, also highlight the uncertainties some of these clinics face as the incoming Trump administration and the GOP Congress advance plans to repeal and replace Obamacare.

“I’d love to think we can think of policies that will reduce harm, and make things better,” said Leighton Ku, director of the Center for Health Policy Research at George Washington University and an author on one of the studies. “But my crystal ball isn’t that clear.”

The two studies, which appear in the journal Health Affairs, use data from the federal Health Resources and Service Administration to examine Medicaid, the federal-state insurance plan for low-income people. Under the law, states could opt into an expanded version of the program that covered more people. GOP plans to undo the 2010 law would likely include erasing that option. Many Republicans also want to change Medicaid from its current open-ended, entitlement status into a block grant, which would send a set, lump sum of funding to states and allow them more flexibility to tailor the program to address local health needs, potentially spurring innovation and more efficiency. 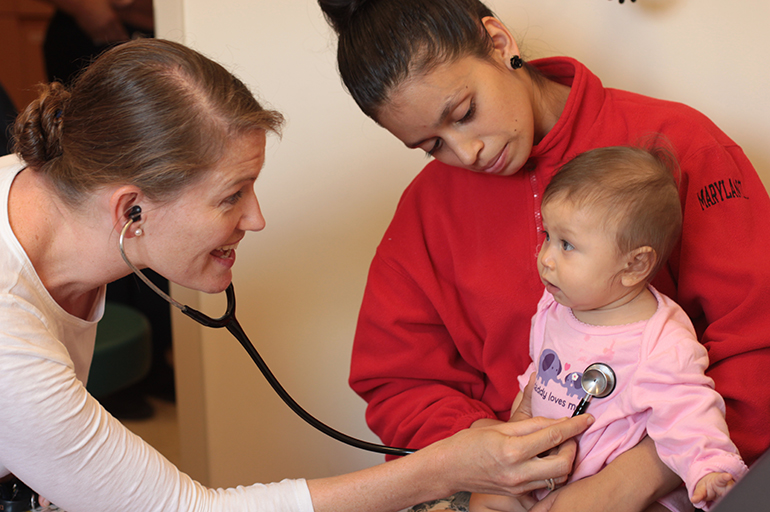 “There may be things that can done in the delivery of care for community health centers, which ultimately is more valuable and effective than the traditional Medicaid program,” said Tom Miller, a resident fellow at the American Enterprise Institute, a conservative think tank.

It’s too soon to say, Miller argued, how health care funding will play out, how money could be used and who will benefit. But other advocates of the law — including many leaders of community health centers — say that current discussions leave strong potential for funding cuts that would limit their ability to provide care. The Health Affairs findings play into that concern.

Ku’s paper, which used data from 2012 to 2015 to track visits to community health centers, compared how many patients visited the centers, their insurance, and whether they sought medical, dental or mental health care. In states that opted into the expansion, health centers saw more patient visits, lower rates of uninsured patients — a financial boon for clinics that typically operate on thin margins — and an increase in patients specifically seeking mental health care.

The second study examined data from 2011 to 2014 and found that, in states that expanded Medicaid, patients were more likely to receive asthma treatment when it was needed, have their body mass index assessed, get pap smears and keep their blood pressure relatively stable.

“Achieving better quality in [these areas] requires medications — access to prescription drugs,” noted Amal Trivedi, an associate professor of health services, policy and practice at Brown University and an author on the second study.

Some clinic officials noted that these statistics illustrate tangible gains.

Community health centers in Michigan, which pursued the expansion, saw a double-digit increase in the percentage of Medicaid patients — from 44 percent to 54 percent — even as the overall number of patients served grew, noted Jen Anderson, a spokeswoman for the Michigan Primary Care Association, the trade group for the state’s centers. More of those patients were diabetic or asthmatic, she added, and now able to get previously unaffordable medications.

Without that coverage, Trivedi speculated, the improvements health centers made in treating these and other conditions could be reversed.

The studies found that the centers, too, benefited from the expansion, which has allowed them to staff up to do provide mental health and other types of care.

In Pennsylvania, for instance, which has been hard hit by the opioid epidemic, more clinics have been able to develop specialized addiction treatment programs, said Cheri Rinehart, president of that state’s health center association. Other clinics report that health law dollars have allowed them to hire case workers to follow up with patients to make sure they have stable housing and access to healthy food as well as transportation to doctors’ appointments.

Those kinds of efforts will be much harder if Congress acts on its proposed repeal without a meaningful replacement, Gomez said.

“We’ll have to cut services for everyone,” she said.

At Mary’s Center, she said, that would mean tamping down on dental care, cardiology or endocrinology to treat diabetes. The center would also likely downsize how many doctors and nurses it employs, making it harder to see as many patients in a timely manner.

These centers are often the only real option for care. If they can’t provide a service, people will likely go without until it’s an emergency, Pennsylvania’s Rinehart noted.

Without the coverage expansion, community health centers “will have to re-evaluate all the services they’re providing,” Rinehart said. “Just like a body in crisis, you focus on the core, and lose many of the ancillary services that are critical.”