Health-law provisions taking effect next year could save U.S. employers billions of dollars in expenses now paid for workers who continue medical coverage after they leave the company, benefits experts say.

Insurance marketplaces created by the Affordable Care Act are expected to all but replace COBRA coverage in which ex-employees and dependents can remain on the company plan if they pay the premiums.

“As soon as the law was passed, the question among employers and benefits people was: Is there still going to be a reason for COBRA?” said Steve Wojcik,  vice president of public policy for the National Business Group on Health, an employer group. Offered a choice between heavily subsidized coverage in the health act’s insurance exchanges or paying full price under COBRA, he said, “most people are going to choose the exchange.” 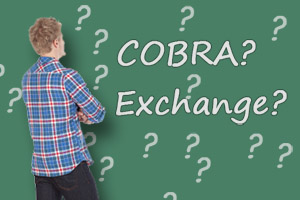 The Consolidated Omnibus Budget Reconciliation Act of 1985, known as COBRA and intended to furnish coverage between jobs, is a burden for employers as well as participants.

Because company cost sharing usually ceases when workers depart, COBRA members pay premiums exceeding $5,000 per year for single-person coverage and more for families. But because it’s so expensive, only people who know they’ll use the insurance are likely to sign up.

That means participants are typically sicker than average and use half again as much in benefits as they pay in premiums, causing losses for large corporations that pay their own medical claims.

“Employers hate it because it involves people on the plan who are no longer associated with the employer,” said Paul Fronstin, director of health research at the Employee Benefit Research Institute. “And they cost more.”

Forty-one percent of large businesses recently surveyed by Wojcik’s group expect former employees eligible for COBRA to seek coverage next year on the exchanges instead. Analysts expect few ex-employees if any to choose COBRA once the online marketplaces, scheduled to open in October, become established in a few years.

Like most COBRA participants Jessica Stephens, a 29-year-old Chicagoan, pays the full cost of insurance sponsored by her former employer — $518 a month. Most employers include a 2 percent administrative fee.

Stephens, who now makes about $25,000 working as a cook at a restaurant that doesn’t offer insurance, says she took a part-time job to pay her COBRA bill. She’s likely to qualify for exchange tax credits that would allow her to buy a policy starting in January for less than $200 a month.

“That’s wonderful. I would definitely take the exchange” once it becomes available, she said. “I thought I could squeeze by financially doing COBRA, but the last nine months have told me that’s not possible.”

COBRA savings are a little-examined dividend for employers, many of whom have complained that the health law’s taxes and coverage expansion will hurt their profits and suppress hiring. Meanwhile insurers worry that ex-COBRA members will contribute to a sicker-than-average influx of exchange enrollees.

“I’ve been preaching for two years that large, self-funded employers were going to get a dramatic COBRA windfall from the act at the expense of the carriers who participate” in the health exchanges, said Michael Bertaut, senior economist at BlueCross BlueShield of Louisiana, which will sell plans on the Louisiana exchange.

The average COBRA member cost his former employer 54 percent more — $3,800 —than the average active worker, continuing a long-term trend, according to a 2009 survey by newsletter Spencer’s Benefits Reports. At one company in five, COBRA participants cost more than twice as much as active workers.

But COBRA members pay premiums based on the lower cost of active employees. (Because former employers usually don’t help with premiums, COBRA members pay far more than they did when employed. But they still don’t pay enough, on average, to cover the cost of their care.)

Besides the chance to stay on the company plan regardless of pre-existing illness, COBRA gives former workers a grace period to sign up —often after they’ve already sought care.

So a person who declines COBRA coverage because it’s too expensive as he was leaving a job can change his mind after he has an accident and racks up medical bills. That retroactive option, which lasts at least two months, raises the likelihood of high expenses.

Spencer’s, which discontinued the survey after 2009, estimated there were 4.8 million COBRA beneficiaries in 2008. Based on the Spencer’s figures, COBRA would have cost employers more than $10 billion that year.

The federal Agency for Healthcare Research and Quality estimated there were 2.6 million COBRA beneficiaries in 2011, the most recent year available.

Not all COBRA participants plan to switch to the ACA marketplaces. Many are unaware of the option. Even some who understand the advantages want to make sure the new products function as promised.

“I want to see it in black and white — exactly how this system works,” said Janaki Ram Ray, a Maryland retiree whose wife, 58, is on his former employer’s plan. “I’ll think twice about giving that up for an exchange plan to save $200 a month.”

But few doubt COBRA coverage will fade once ex-employees — often still unemployed and with limited income — understand their alternatives.

Swapping COBRA For Obamacare Likely To Be Windfall For Big Business