Health insurers in several big cities will take some pain out of doctor visits this year — the financial kind.

You read that right. Doctor visits without copays. Or coinsurance. And no expensive deductible to pay off first. Free.

In Atlanta, Chicago, Dallas, Miami and more than a dozen other markets, individuals seeking coverage from the insurance exchanges can choose health plans providing free doctor visits, an insurance benefit once considered unthinkable. The improvements are rolling out in a limited number of plans following reports that high copays and deductibles have discouraged many Americans who signed up for private coverage the past two years from using their new insurance under the Affordable Care Act. 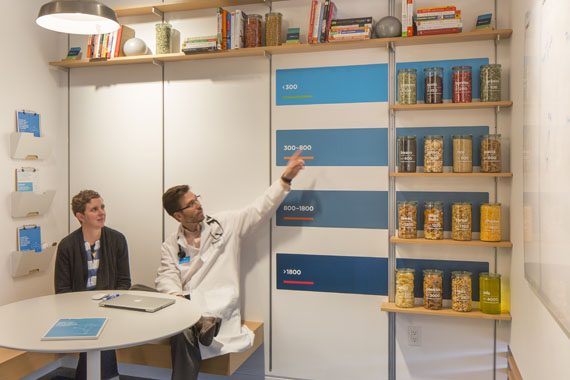 Dr. Craig McDougall of ZOOM+ discussing food as medicine with a patient (Photo courtesy of ZOOM+)

Insurers say they hope encouraging visits to doctors will benefit members and their bottom lines by catching illnesses early before they become harder and more expensive to treat.

For example, prescribing antibiotics promptly to a patient with pneumonia could avoid a lengthy hospitalization costing tens of thousands of dollars. In addition, the policy could also cut down on the use of more expensive urgent care centers and emergency rooms.

Jan. 31 is the final deadline for consumers to sign up for 2016 coverage.

Florida Blue, the state’s largest insurer, has health plans in Miami-Dade and nine other counties where low-income members buying plans can also get two free primary care visits per year.

California-based Molina Healthcare is offering not only free primary care visits in some plans, but also free visits to specialists in Florida, Texas and five other states.

The no-fee visits go beyond the many preventive services, such as immunizations and screenings that all insurers must provide under Obamacare without charging a copay, even when a deductible hasn’t been met.

“This is a great development…and shows how the market is trying to innovate,” said Katherine Hempstead, director of coverage for the Robert Wood Johnson Foundation. “It’s a very exciting idea.”

“Consumers should find this very appealing…it might be like a ‘spoonful sugar to make the medicine go down,’” she said, quoting a line from a song in “Mary Poppins.”

“People are not going to grouse as much about cost sharing later if they are getting something free first.”

Consumer advocates applaud the trend, which they say underscores why people need to look beyond the monthly premium when shopping for a plan. “It’s a smart move to reduce financial barriers to basic outpatient care to help patients manage their health,” said Lydia Mitts, a senior policy analyst at Families USA. “I hope other health plans will realize removing financial barriers to primary care doctors is a smart direction for patients and for the plans.”

The health plans offering free doctor visits are typically among the lowest-priced plans in many markets, according to a KHN review of plans sold on the exchanges.

Some insurers can offer free visits because they operate health clinics staffed by salaried physicians. That’s the case at Harken Health, which has four primary care clinics in Chicago and six in Atlanta for its members to use for unlimited visits. Harken also offers members access to a doctor by telephone and Internet. “We are creating unfettered access between the care team and the patients,” said Tom Vanderheyden, CEO of Harken Health.  “We think it’s a significant differentiation.” Harken also offers free yoga and cooking classes.

Dave Sanders, CEO of Zoom+ and a physician, said offering free doctor visits at its modern clinics, should help attract young enrollees. “We are unabashedly focused on the millennial generation,” he said.

Zoom+ has run clinics in the Portland area for the past year, but it’s never offered an insurance plan before. Members can get free care at the clinics or Zoom’s freestanding emergency room.

Under the health law, marketplace plans must cover a certain percentage of a member’s health costs with the amount varying based on gold, silver or bronze tiers. “What we have done is to spend the resources on primary care,” Sanders said.

To offer such benefits, Florida Blue developed a smaller network of doctors, hospitals and pharmacies so it could better control costs. But to encourage enrollment in Miami-Dade County it recently partnered with three CliniSanitas medical clinics, which primarily serve the Hispanic audience in the area. The plan is also available across South Florida, and counties around Tampa and Orlando.

Jon Urbanek, a senior vice president for Florida Blue, said the new plan is intended to increase the insurer’s market share. He said participating providers in the myBlue products are not necessarily paid less than other doctors but their pay is more closely tied to reaching certain quality targets such as cancer and cholesterol screenings. In six of the 10 counties where it’s available, the myBlue product offers the lowest premium. “We think our pricing positions us to do very well,” Urbanek said.

Molina Healthcare is offering zero copays for unlimited primary care doctor visits for one of its silver-tier plans for 2016. Unlike Florida Blue, it says it offers free doctor visits in its plans without using a narrow network of doctors and hospitals. “We really want folks to get value from their premium dollar and not have any barriers for care,” said Lisa Rubino, senior vice president at Molina.