When we first met Tammy Boudreaux, a freelance social worker in Houston, last December, she was still weighing her health insurance options. She told us she was overwhelmed and confused by the choices she was finding on healthcare.gov; plus, the high deductibles of the Obamacare plans didn’t seem like such a great deal. But when we checked back in with Boudreaux this month, we learned that complications from a chance encounter with a bottle of hot sauce ultimately changed her mind.

Last fall, Boudreaux, 43, was uninsured — and wielding a knife. She was cutting the wax seal off a bottle of hot sauce when it slipped and stabbed deep into her index finger. 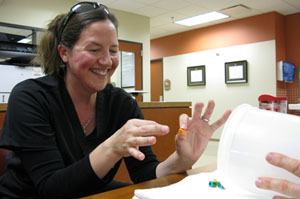 Tammy Boudreaux, who got hand surgery a week after signing up for ACA insurance, flicks beads into a bucket as part of her follow up therapy. She pays a $50 copay for the session (Photo by Carrie Feibel/Houston Public Media).

Boudreaux went to the emergency room right away and paid out of pocket to get it stitched up. Still, at that point Boudreaux didn’t see any urgency; she’s relatively healthy and figured a plan with a high deductible would be a financial burden.

The holidays came and went, and she remained undecided about whether to buy insurance.

But her finger wasn’t getting better.

Not only that, but the finger hurt. A minor accident had become a major problem. “I can’t get by,” she realized. “It’s my finger — it’s a pretty serious injury. And I’m relatively young, I don’t want to live the rest of my life with this impediment if I don’t have to.”

So Boudreaux chose a Blue Cross Blue Shield plan that cost $336 per month on the healthcare.gov website. The plan started Feb. 1 and within a week she was getting surgery to repair her finger.

After the procedure came weeks of rehabilitation at Houston Methodist, where she still is seeing hand therapist Peggy Boineau. “We’re going to look at strength today,” Boineau told Boudreaux, slowly talking her through the steps at a recent session. “Turn your hand this way. Straighten that joint.” The two women laughed as Boudreaux had trouble flicking tiny beads into a plastic bucket — an exercise to loosen the finger joint.

Boudreau pays a $50 co-pay for each therapy session. Beyond that she has to meet a $3,000 deductible before the insurance begins to cover her medical care.

But Boudreaux said it’s worth it and she believes that if other uninsured Texans had just pushed through the difficulties of signing up, they’d be as pleased as she is now.

“I’m really impressed that Obama started this,” she said. “I think he’s going to be viewed [similarly] to [President Lyndon Johnson], with his focus on social issues, which is good.”

Louis Adams, a spokesman for Blue Cross Blue Shield, pointed out that two-thirds of Texans who enrolled on the federal website chose one of his company’s plans.

“We’re pleased to know that Tammy and so many others looking for health insurance that best suits their individual needs, chose us, and are giving us the opportunity to be with them when they need that coverage,” he wrote in a statement to NPR.

In Texas, only about a quarter of people eligible to sign up for a new health plan actually did so. Open enrollment for 2015 begins November 15th.

This story is part of a reporting partnership that includes NPR, Houston Public Media and Kaiser Health News.