Online marketplaces at the heart of the health law opened for business Tuesday, often haltingly, as Web-based insurance portals were swamped with consumers who were frequently unable to sign up. 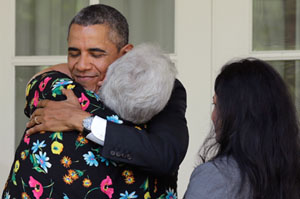 President Obama hugs Americans who will benefit from the Affordable Care Act after delivering remarks in the White House Rose Garden Tuesday about the launch of the law’s marketplaces (Photo by Win McNamee/Getty Images).

The Obama administration declared the launch a success even as it declined to furnish short-term enrollment numbers in the federally run marketplace for 36 states or a timetable for producing them.

A snag blocking Web users from signing up was fixed by Tuesday afternoon, said Marilyn Tavenner, head of the federal Centers for Medicare & Medicaid Services. More than 2.8 million visitors came to the federal site after midnight Monday, she said.

Meanwhile, portals operated by Hawaii and Minnesota had not allowed consumers to shop and enroll by late Tuesday afternoon. Maryland’s site was greeting visitors with delay notices for much of the day. Washington state’s site prompted users to fill out a form and wait for contact by phone.

“I’ve tried all morning and I have yet to get on,” Emily Nichols, director of operations at The Family Practice & Counseling Network in northwest Philadelphia, told the Philadelphia Inquirer. Nichols was trying to help patients determine their eligibility on the federal site.

“This surge of early applications demonstrates the pent up demand for quality health coverage for many Kentuckians, who will be able to have that coverage beginning Jan. 1, 2014, because of the ACA,” said spokeswoman Gwenda Bond.

“Consider that just a couple of weeks ago, Apple rolled out a new mobile operating system and within days they found a glitch, so they fixed it,” he said Tuesday afternoon. “I don’t remember anybody suggesting Apple should stop selling iPhones or iPads or threatening to shut down the company if they didn’t.”

Republicans suggested exchange bumps were emblematic of the larger law that the House has now voted more than 40 times to cancel, defund or dismantle.

“These ‘glitches,’ which the president is trying to brush off, reveal how totally unprepared the government is for this launch,” House Oversight Committee Chairman Darrell Issa said in a prepared statement. “Americans are attempting to purchase health insurance on Obamacare exchanges and are being met with crashing websites, missing price information, confusing forms and in some cases, exchanges that had to delay their start date because they aren’t ready yet.”

Insurance professionals suggested the portals would work better once opening-day traffic dies down.

“As much as I might want to grouse about, this is to be expected,” Travis Middleton, a Texas insurance broker who unsuccessfully tried to access the federal site early Tuesday, told KUHF in Houston. “This is going to go on for probably several days.”

The marketplaces, designed to overcome high prices, exceptions for preexisting illness, benefit caps and other decades-old obstacles to coverage, sell plans effective as soon as Jan. 1. They also offer health policies to employers with fewer than 50 workers.

“Today’s launch begins a new day when health care coverage will be more accessible and affordable than ever before,” said Kathleen Sebelius, secretary of the Department of Health and Human Services.

The law being implemented today is not the same legislation Obama signed in 2010. In response to legal challenges, last year the Supreme Court allowed states to opt out of the ACA’s expansion of the Medicaid program for low-income consumers. As a result only about half the states are expanding Medicaid.

Even so, the Congressional Budget Office expects 14 million Americans to gain coverage in the first year, mainly through the exchanges or Medicaid. Roughly 48 million Americans are uninsured, according to the Census Bureau.

For many, the exchanges promise access to doctors and medicines that might seem out of reach despite their location in one of the richest nations in the world. Starting Jan. 1, most Americans are required to have health coverage or pay a penalty that starts at $95 or 1 percent of income and rises to $695 or 2.5 percent of income.

“I’ve been without insurance for several months now because I haven’t been able to afford it,” said Zannah Merrill, 28, a recently unemployed Virginian who is dealing with chronic illness. “I’m excited about the health care exchange because once I get a job or once I’m back in school and I have loans that will cover my expenses, that will make life so much easier.”

But for others the law means higher taxes, more expensive policies or paying a penalty for lacking insurance. Covering the sick and charging them less under the health act requires making the well sign up and in some cases charging them more.

“Just because people sign up for October or November they may not understand the plan they select,” said Joseph Antos, a health economist at the American Enterprise Institute. “Reality will strike them when they pay the premium. By then plans will have seen disenrollment — either because they didn’t pay the bill or because they actively didn’t want to.”

Meanwhile, many employers are amending their health benefits, which some see as a side effect of the health law and others see as part of a routine effort by corporate America to control health costs. But often the moves raise doubts about the health overhaul.

“Let’s face it, folks have been told all along if you like your coverage you can keep it,” said Edward F. Howard, executive vice president of the nonpartisan Alliance for Health Reform. “If your employer does not like your coverage, you’re not going to keep it, and that’s going to be off-putting for lots of folks.”

While the administration has boasted that premiums sold through the marketplaces in many cases have turned out to be lower than expected, others have noted that exchanges are revealing that networks for the least expensive plans may exclude many popular hospitals and doctors.

“It’s going to be something we have to watch,” said John Holahan of the Urban Institute’s Health Policy Center. Many plans sold on the exchanges, he said, “are probably not going to have the very best, most expensive, hard-to-get hospitals and doctors in those networks.”

For all their sweep, the marketplaces have no impact on millions insured by employers, seniors covered by Medicare and some others with existing policies.  Their chief effect is on the market for individuals, families and small employers buying commercial insurance plans.

Independent analysts said it will take months or years to determine whether the exchanges are succeeding. Consumers have until March 31 to sign up for coverage. Many compared today’s openings to an unannounced “soft opening” at a restaurant still training the waiters. “The outcome for the first year is going to depend on what happens over the next many months,” said Paul Ginsburg, president of the Center for Studying Health System Change. “This is a multi-year process.”

By Phil Galewitz and Jay Hancock and Ankita Rao October 1, 2013