Two high-profile Texans are fighting the Affordable Care Act. Governor Rick Perry has loudly dismissed the law, and Republican Sen. Ted Cruz took to the Senate floor this week to rail against it at length—21 hours and 19 minutes to be exact.

On the other side you have Rosy Mota and her clipboard, standing at the door of a CVS pharmacy in one of Houston’s Latino neighborhoods, stopping shoppers. 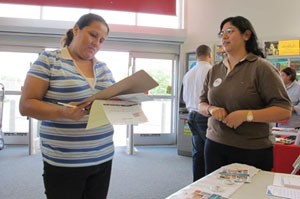 “Hello, would you like a brochure about the new health care coverage that’s coming into effect? We’ll be here if you have any questions,” she tells a customer.

Mota works for Enroll America, a national organization that has borrowed its tactics from the Obama re-election campaign. Using data-mining and digital maps, the group is figuring out where the uninsured in Houston live, down to the block and house level.

Enroll America has just seven workers for Houston’s 800,000 uninsured residents. But it is part of a coalition of organizations that include the city health department, the county’s public clinics and groups like the Urban League, which are trying to get the word out about health insurance marketplaces, which will open Oct. 1, providing resources to help the uninsured buy new coverage created under the health law.

“Regardless of whether you are for the Affordable Care Act or you’re against the Affordable Care Act, we’re not looking at it that way,” says Houston health official Benjamin Hernandez. “We’re saying that, from a public health perspective, getting people insured and getting them into the system is a good thing to do.”

The state of Texas is not providing any money or staff to help people sign up. So the city is using federal money funneled through the United Way and also tapping its own resources.

In fact, it considers the project so important that it’s using the same command-and-control structure that it uses during hurricanes. Instead of shelters and relief centers, the city is compiling a list of block parties, church events and festivals where people can learn about Obamacare and how to sign up.

“Otherwise you would have…organizations going to the same territory, knocking on the same doors, talking to the same number of people, and when you look at Harris County, we’ve got close to about a million uninsured people, so there’s a lot to go around,” said Hernandez. “So that’s why we want to organize, so we make sure we get to all the different pockets in the county that need to hear about this.”

In addition, the Harris Health System is getting involved on a large scale. The publicly-funded safety-net system runs two hospitals and 16 community clinics. It has a lot to gain from Obamacare: It sees 250,000 uninsured patients every year. An estimated 75,000 of those make between 100-400 percent of the federal poverty level, and could therefore be eligible for subsidized coverage on the marketplace.

Although the hospital district did not receive any federal money, it’s requiring 300 of its own workers to become certified application counselors under Obamacare, a five-hour on-line training process. 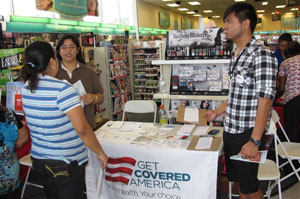 Joel Avendano, a volunteer with Enroll America in Houston, assists at an Enroll America table set up in a local CVS pharmacy (Photo by Carrie Feibel/KUHF).

“I think we had to be active and proactive to take steps to make the community aware that the law did pass and that it is starting Oct. 1,” said Deborah Boswell, director of community outreach services for Harris Health System. “Many people think because they live in Texas it doesn’t count for then, but it does. So we want the uninsured population to know that they have options.”

In addition to uninsured whites, black and Latinos, Houston has large populations of immigrants from Vietnam, China and South Asia. Last week Asian American health advocates met to discuss the problem and hear from the city health director and a Medicare official. They shared concerns about people’s lack of information and trouble finding interpreters.

Yani Rose Keo works with Cambodian farmers from rural areas southwest of Houston. Many of them are refugees and fearful of what the law means for them as small business owners, and individuals.

“We are scared to death,” Keo told the officials.  “All the farmers, they have the small backyard – one acre, two acres of land and no insurance.”

“Please help us!” she pleaded. “What should I do, to help them?”

Michael Coulter, the Medicare official, said there have been problems with the interpreters, but they’re getting fixed and urged the groups to keep trying.

With almost 2.6 million Texans eligible to enroll in the marketplaces, the scope of the enrollment will be historic, Coulter says. “It’s a huge program. This makes our Medicare rollout that we did eight years ago for Part D look like a small Sunday school picnic.” Part D was the plan under which Medicare began to cover the cost of outpatient prescription drugs.

Mota is working with those Texans one at a time. She catches Maribel Hernandez’s attention by telling her that everything will be explained to her clearly. “There’s like no more fine print. It’s, like, plain.”

Hernandez is 38. Her family has insurance, but she’s unhappy with the coverage. Mota tells her she might find a better deal in the marketplace.

Another of Hernandez’s concerns is her diabetes. “It is pre-existing, so will they deny you because of that?” she asked.

“No, ma’am,” Mota answers. “They are prohibited by law now…And they cannot charge you more either.”

“Good,” Hernandez responds, “because that’s one of my main things.”