LEADVILLE, Colo. — Colorado stands out on the map of U.S. obesity rates, a cool green rectangle surrounded by more alarming shades of yellow, orange and red.

But upon closer inspection, Colorado weighs in as two states: one dangerously heavy and one fit and trim.

There are the mostly well-educated, affluent whites, many of whom were drawn to Colorado by high-paying tech jobs and myriad outdoor opportunities.

By contrast, the adult obesity rates among minorities are much higher — 29.9% for blacks and 27.7% for Latinos, far worse than the 21.6% rate for non-Hispanic whites. While those figures beat the nation’s overall obesity rate of 39.8%, a large portion of state residents still struggle to eat healthily and live active lifestyles. 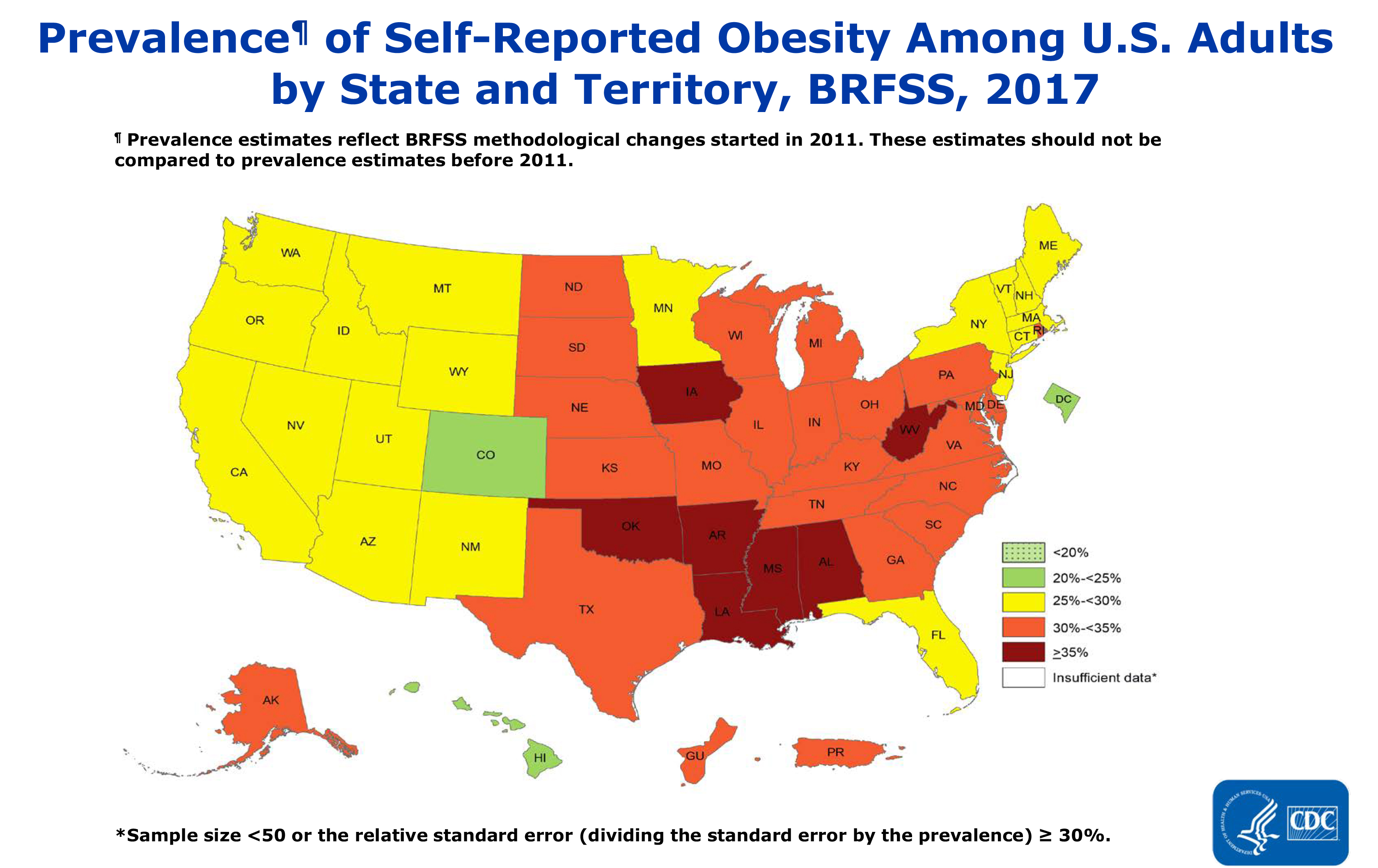 Few places illustrate that contrast as clearly as Leadville, a Lake County town of 2,759 nestled among the Rocky Mountains, and best known as the home of an eponymous 100-mile ultramarathon. Though Lake County is near the glamorous resorts of Vail and Breckenridge, Leadville and its surroundings are filled with trailer parks, home to the workers who make the tourism economy hum.

Many other states, counties and cities register similar disparities on the scales of obesity, healthy eating and exercise. The overarching statistics mask underlying problems, making it hard to attract attention and resources for those in need.

“Lots of people think of Leadville as really healthy. How can Leadville have an obesity problem?” said Katie Baldassar, director of the local public health department’s Lake County Build a Generation project. “What we really see in Colorado is an equity problem. And we see that in Leadville.”

The adults here commute to jobs in the ski towns on the well-to-do sides of mountain passes. “They clean hotel rooms over in Vail. They work construction over in Breckenridge,” Baldassar said. “And they’re experiencing the double-headed monster of food scarcity and obesity.”

Their children attend public schools, where 70% of students are Hispanic. Despite the outdoor opportunities that surround them, nearly twice as many students in Lake County fail to meet physical activity guidelines as those in the more affluent Summit and Eagle counties nearby. Obese children tend to become obese adults.

And so, in early July, a group of 8- and 9-year-olds, formally known as Crew 5 of the Rockies Rock summer program, trudged up a mountain trail toward Mosquito Gulch. Many of the children had never gone hiking or fishing before joining the program, and most would have been spending a more sedentary summer without it.

“Probably watching my tablet or TV,” said Leonandro Lopez, 9, who led the other kids in song during the hike. “I don’t like getting my body moving.” 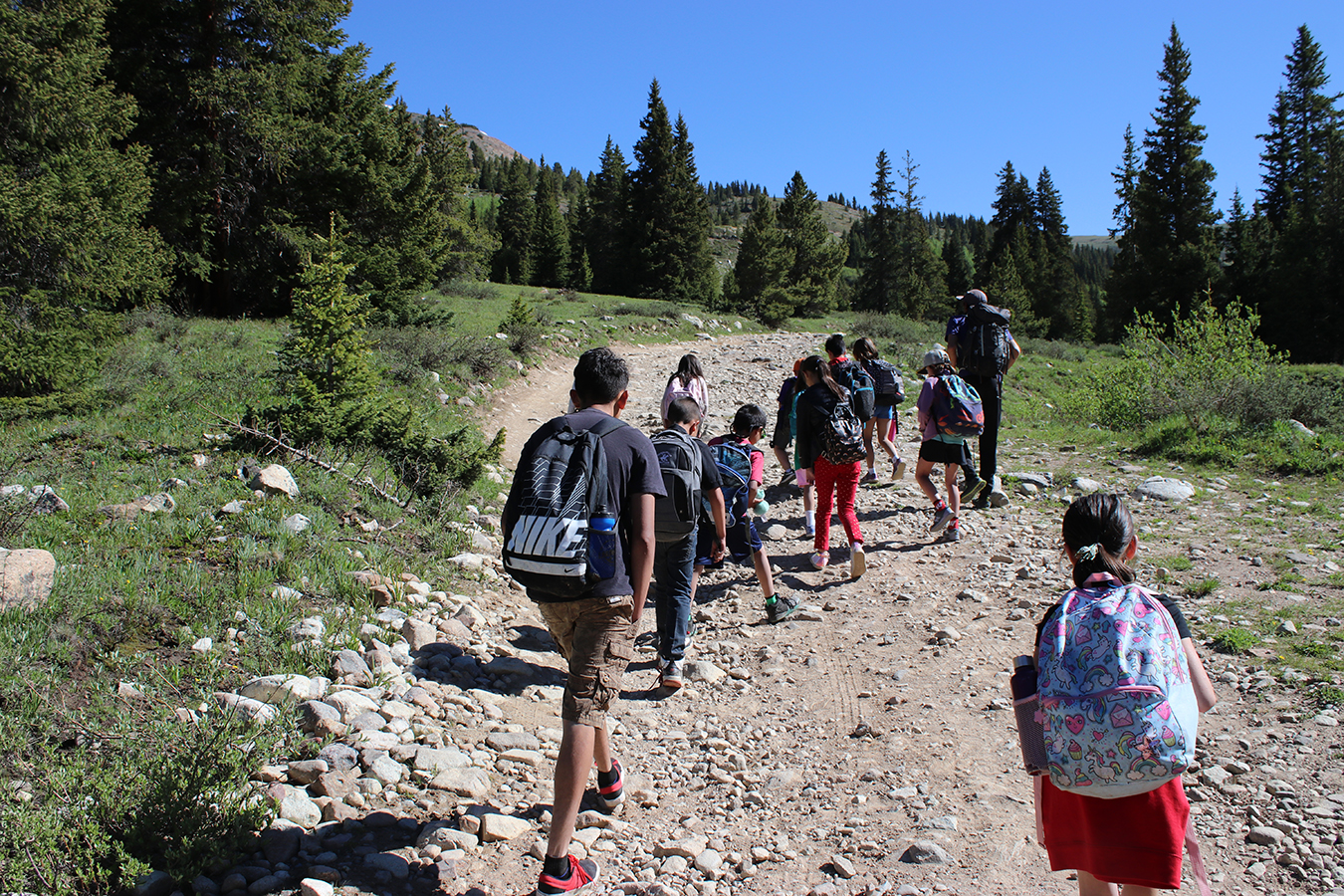 The Get Outdoors Leadville! program takes kids outdoors for seven hours a day, five days a week, exposing them to the outdoor recreation that draws tourists to the mountain city.(Markian Hawryluk/KHN)

The program is run by Get Outdoors Leadville!, which receives funding from state lottery dollars. Most of the families pay the lowest tuition on its sliding scale, about $30 to $50 for a two-week session.

Participants get healthy meals and snacks through the program, a key benefit in a county where 67% of kids qualify for free or reduced-price lunches during the school year, and 24% live below the poverty line.

The program takes kids outdoors for seven hours a day, five days a week, exposing them to the outdoor recreation that draws tourists to Leadville.

“We hope that our participants get familiar with these local places,” said Cisco Tharp, healthy kids director for Get Outdoors Leadville! “And can tell their families, ‘Hey, we can go here and we can do this.’”

Lake County’s obesity levels mirror those in the rest of the state, with Hispanics faring worse than many of their neighbors.

“It’s a common characteristic of the way we observe obesity levels throughout the country,” said John Auerbach, CEO of Trust for America’s Health, a nonprofit that issues an annual state-by-state obesity report. “Obesity is more likely to be prevalent among those with lower incomes and among certain populations of color, in particular, African Americans, Latinos and American Indians.”

That is true in part because these populations may have less access to healthy foods, beverages or safe community spaces for physical activity, said Dr. Ruth Petersen, who runs the Centers for Disease Control and Prevention’s Nutrition, Physical Activity and Obesity division. Minority neighborhoods see more marketing of unhealthy foods and beverages, while fresh fruits and vegetables are often nonexistent — or more expensive than in wealthier neighborhoods that can attract supermarkets.

Groceries in Leadville cost 18% more than the national average, according to a recent community food assessment, while incomes in Lake County languish far below the state average. The sole grocery store in Leadville stocks bottles of oxygen for tourists struggling with the thin air, but has barely half an aisle of fresh produce.

The Cloud City Conservation Center is growing vegetables locally, a significant challenge given the 10,000-foot elevation and short growing season. The farm consists of a pair of greenhouses — a geodesic dome and a hangar-like tunnel — draped in plastic sheeting. 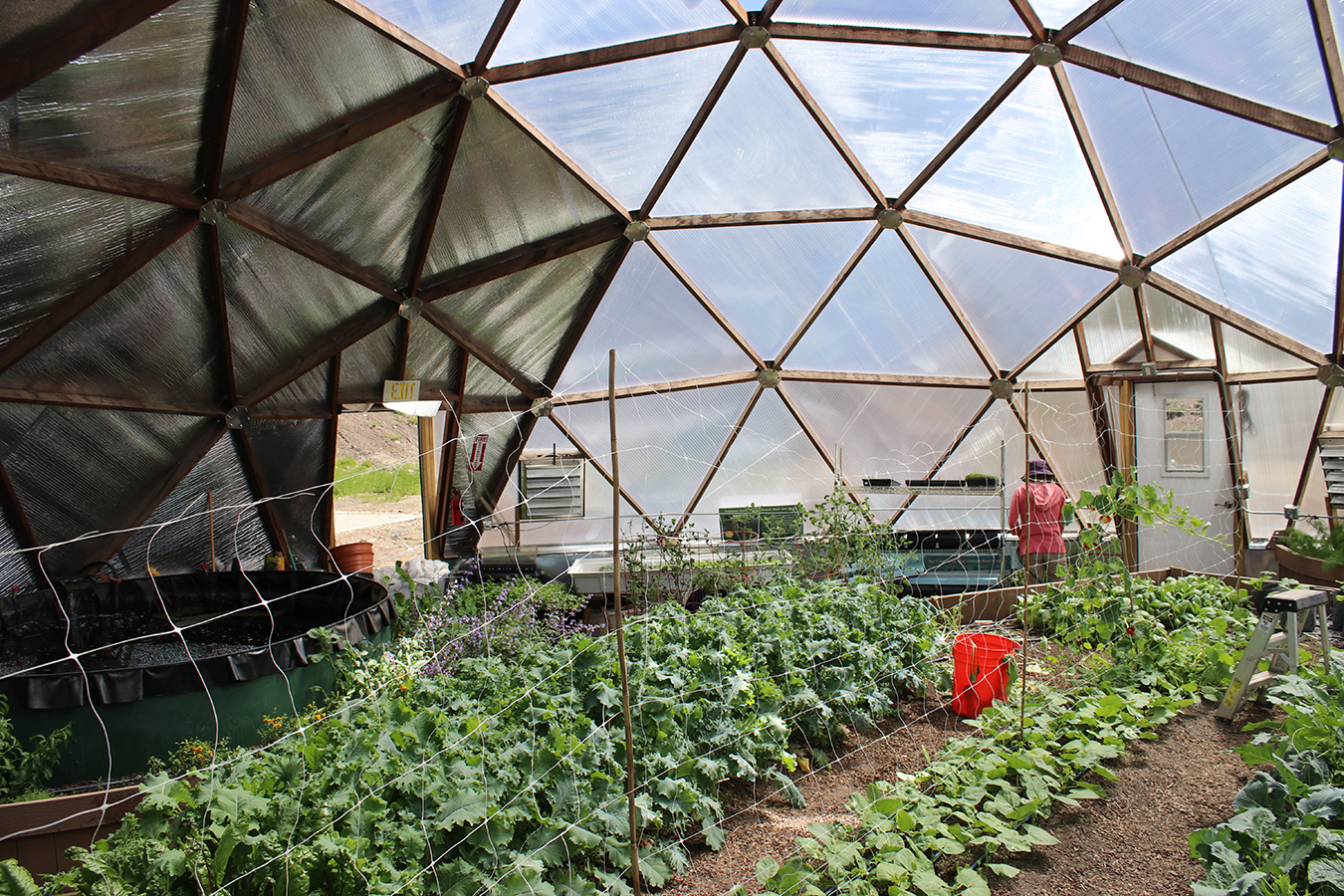 The Cloud City Conservation Center grows vegetables in Leadville, Colo., in a pair of greenhouses, and sells the produce through a community-sponsored agricultural program that provides 30 families with a weekly box of fresh vegetables. Ten of the spots are set aside for low-income families in a community where fresh produce is otherwise expensive and limited.(Markian Hawryluk/KHN)

The farmers grow plants that provide the best harvest in the least space, including Swiss chard and lettuce, cabbages and peas. That means no tomatoes, although that’s what everybody wants.

“The vegetables that grow best in this climate may be less popular, but they are the best for you,” said Kendra Kurihara, Cloud City’s executive director.

Cloud City sells its produce through a community-sponsored agricultural program that provides 30 families with a weekly box of fresh vegetables. Ten of the spots are set aside for low-income families, who get twice the value for food stamp dollars. But the demand exceeds the supply, with 45 families stuck on a waiting list.

Schools have also revamped recess and the playgrounds.

Just six years ago, students at the Lake County Intermediate School would race to finish their lunch the fastest, knowing the first kids out the door had the best chance to get one of the eight swings, the only usable piece of equipment on the school’s playground.

A group of parents banded together, hoping to raise $1,000 to buy balls and jump-ropes. With foundation help and private fundraising, they ended up with a $500,000 playground redesign. When the designers asked the children what they wanted, the kids asked for more swings.

“That was all they knew,” Baldassar said. “They couldn’t imagine anything else.”

The playground they built features giant rope spider webs for climbing, slides built for speed, hanging lily pads for balancing — and, yes, swings. It was a turning point for the school district, she said, that has paid dividends with higher test scores and improved academic performance.

Still, Joan Brucha, Healthy Eating Active Living unit manager at the Colorado Department of Public Health and Environment, said funding for obesity prevention work in Colorado comes to about 27 cents per state resident. “You can’t make meaningful change on that level,” she said.

According to the CDC, the U.S. spends 31 cents per person on obesity prevention efforts. CDC officials say they target limited resources to areas where obesity rates are highest.

And that makes it a lot harder for Colorado to make its case. Funding from the state tobacco tax also is available to counter obesity, but it’s not enough to make a difference in Lake County or the rest of the state.

In 2011, Democratic Gov. John Hickenlooper set a goal of reducing obesity rates by 10% by 2020. Just months from the deadline, the state isn’t anywhere close to achieving it.