Americans are continuing to supersize – adult obesity rates increased in 16 states last year and did not go down in a single state  – raising health risks and ultimately adding to the cost of health care, according to a study out today. 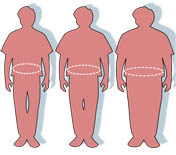 Just four years ago, only one state had obesity rates above 30 percent. Now 12 states do, say the Trust for America’s Health and the Robert Wood Johnson Foundation in a report titled: “F as in Fat: How Obesity Threatens America‘s Future 2011” .

Obesity rates have doubled in seven states since 1995 and increased by at least 90 percent in 10 others.  Rates grew fastest in Oklahoma, Alabama and Tennessee.  The report contains a state-by-state ranking.

“Today, the state with the lowest obesity rate would have had the highest rate in 1995,” the trust’s Executive Director Jeff Levi said in a summary of the report. “There was a clear tipping point in our national weight gain over the last twenty years, and we can’t afford to ignore the impact obesity has on our health and corresponding health care spending.”

Excess weight can lead to a host of health problems, including diabetes, researchers say. They add that the United States already spends more than $150 billion each year on health care costs linked to obesity — an amount that is expected to grow.

The Centers for Disease Control and Prevention defines obesity as having a body mass index of 30 or higher, and provides a BMI calculator.

Today’s report calls for restoration of some federal nutrition programs and urges Congress not to cut back on the $15 billion promised to the Public Health and Prevention Fund over the next decade, part of the federal health care overhaul law.