Adriane Fugh-Berman was stunned by the question: Two graduate students who had no symptoms of mental illness wondered if she thought they should take a powerful schizophrenia drug each had been prescribed to treat insomnia. 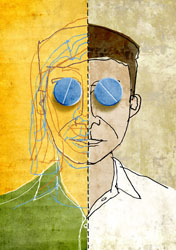 “It’s a total outrage,” said Fugh-Berman, a physician who is an associate professor of pharmacology at Georgetown University. “These kids needed some basic sleep [advice], like reducing their intake of caffeine and alcohol, not a highly sedating drug.”

Those Georgetown students exemplify a trend that alarms medical experts, policymakers and patient advocates: the skyrocketing increase in the off-label use of an expensive class of drugs called atypical antipsychotics. Until the past decade these 11 drugs, most approved in the 1990s, had been reserved for the approximately 3 percent of Americans with the most disabling mental illnesses, chiefly schizophrenia and bipolar disorder; more recently a few have been approved to treat severe depression.

But these days atypical antipsychotics — the most popular are Seroquel, Zyprexa and Abilify — are being prescribed by psychiatrists and primary-care doctors to treat a panoply of conditions for which they have not been approved, including anxiety, attention-deficit disorder, sleep difficulties, behavioral problems in toddlers and dementia. These new drugs account for more than 90 percent of the market and have eclipsed an older generation of antipsychotics. Two recent reports found that children and adolescents in foster care, some less than a year old, are taking more psychotropic drugs than other children, including those with the severest forms of mental illness.

In 2010 antipsychotic drugs racked up more than $16 billion in sales, according to IMS Health, a firm that tracks drug trends for the health-care industry. For the past three years they have ranked near or at the top of the best-selling classes of drugs, outstripping antidepressants and sometimes cholesterol medicines. A study published last year found that off-label antipsychotic prescriptions doubled between 1995 and 2008, from 4.4 million to 9 million. And a recent report by pharmacy benefits manager Medco estimated that the prevalence of the drugs’ use among adults ballooned more than 169 percent between 2001 and 2010.

Critics say the popularity of atypical antipsychotics reflects a combination of hype that the expensive medicines, which can cost $500 per month, are safer than the earlier generation of drugs; hope that they will work for a variety of ailments when other treatments have not; and aggressive marketing by drug companies to doctors and patients.

“Antipsychotics are overused, overpriced and oversold,” said Allen Frances, former chair of psychiatry at Duke University School of Medicine, who headed the task force that wrote the DSM-IV, psychiatry’s diagnostic bible. While judicious off-label use may be appropriate for those who have not responded to other treatments for, say, severe obsessive-compulsive disorder, Frances said the drugs, which are designed to calm patients and to moderate the hallucinations and delusions of psychosis, are being used “promiscuously, recklessly,” often to control behavior and with little regard for their serious side effects. These include major, rapid weight gain — 40 pounds is not uncommon — Type 2 diabetes, breast development in boys, irreversible facial tics and, among the elderly, an increased risk of death.

Doctors are allowed to prescribe drugs for unapproved uses, but companies are forbidden to promote them for such purposes. In the past few years major drugmakers have paid more than $2 billion to settle lawsuits brought by states and the federal government alleging illegal marketing; some cases are still being litigated, as are thousands of claims by patients. In 2009 Eli Lilly and Co. paid the federal government a record $1.4 billion to settle charges that it illegally marketed Zyprexa through, among other things, a “5 at 5 campaign” that urged nursing homes to administer 5 milligrams of the drug at 5 p.m. to induce sleep.

Wayne Blackmon, a psychiatrist and lawyer who teaches at George Washington University Law School, said he commonly sees patients taking more than one antipsychotic, which raises the risk of side effects. Blackmon regards them as the “drugs du jour,” too often prescribed for “problems of living. Somehow doctors have gotten it into their heads that this is an acceptable use.” Physicians, he said, have a financial incentive to prescribe drugs, widely regarded as a much quicker fix than a time-intensive
evaluation and nondrug treatments such as behavior therapy, which might not be covered by insurance.

In a series in the New York Review of Books last year, Marcia Angell, former editor in chief of the New England Journal of Medicine, argued that the apparent “raging epidemic of mental illness” partly reflects diagnosis creep: the expansion of the elastic boundaries that define mental illnesses to include more people, which enlarges the market for psychiatric drugs.

“You can’t push a drug if people don’t think they have a disease,” said Fugh-Berman, who directs PharmedOut, a Georgetown program that educates doctors about drug marketing and promotion. “How do you normalize the use of antipsychotics? By using key opinion leaders to emphasize their use and through CMEs (continuing medical education) and ghost-written articles in medical journals,” which, she said “affect the whole information stream.”

James H. Scully Jr., medical director of the American Psychiatric Association, sees the situation differently. He agrees that misuse of the drugs is a problem and says that off-label prescribing should be based on some evidence of effectiveness. But Scully suggests that a key factor driving use of the drugs, in addition to “intense marketing and some effectiveness,” is the growing number of non-psychiatrists prescribing them. Many lack the expertise and experience necessary to properly diagnose and treat mental health problems, he said.

Among psychiatrists, use of antipsychotics is rooted in a desire to heal, according to Scully. “All of the meds we use have their limits. If you’re trying to help somebody, you think, ‘What else might I be able to do for them?’ “

Since 2005, antipsychotics have carried a black-box warning, the strongest possible, cautioning against their use in elderly patients with dementia, because the drugs increase the risk of death. In 2008 the Food and Drug Administration reiterated its earlier warning, noting that “antipsychotics are not indicated for the treatment of dementia-related psychosis.” But experts say such use remains widespread.

In one Northern California nursing home in 2006 and 2007, 22 residents, many suffering from dementia, were given antipsychotics for the convenience of the staff or because the residents refused to go to the dining room. In some cases the drugs were forcibly injected, state officials said. Three residents died.

A 2011 report by the inspector general of the Department of Health and Human Services found that in a six-month period in 2007, 14 percent of nursing home residents were given antipsychotics. In one case a patient with an undetected urinary-tract infection was given the drugs to control agitation.

“The primary reason is that there’s not enough staff,” said Toby S. Edelman, senior policy attorney for the Center for Medicare Advocacy, a Washington-based nonprofit group, who recently testified about the problem before the Senate Special Committee on Aging. “If you can’t tie people up, you give ’em a drug” she said, referring to restrictions on the use of physical restraints in nursing homes.

Nursing home residents aren’t the only ones gobbling antipsychotics.

Mark E. Helm, a Little Rock pediatrician who was a medical director of Arkansas’s Medicaid evidence-based prescription drug program from 2004 to 2010, said he had seen 18-month-olds being given potent antipsychotic drugs for bipolar disorder, an illness he said rarely develops before adolescence. Antipsychotics, which he characterized as the fastest-growing and most expensive class of drugs covered by the state’s Medicaid program, were typically prescribed to children to control disruptive
behavior, which often stemmed from their impoverished, chaotic or dysfunctional families, Helm said. “Sedation is the key reason these meds get used,” he observed.

More than any other factor, experts agree, the explosive growth in the diagnosis of pediatric bipolar disorder has fueled antipsychotic use among children. Between 1994 and 2003, reported diagnoses increased 40-fold, from about 20,000 to approximately 800,000, according to Columbia University researchers.

That diagnosis, popularized by several prominent child psychiatrists in Boston who claimed that extreme irritability, inattention and mood swings were actually pediatric bipolar disorder that can occur before age 2, has undergone a reevaluation in recent years. The reasons include the highly publicized death of a 4-year-old girl in Massachusetts, who along with her two young siblings had been taking a cocktail of powerful drugs for several years to treat bipolar disorder; the revelation of more than $1 million in unreported drug company payments to the leading proponent of the diagnosis; and growing doubts about its validity.

Helm said that antipsychotics, which he believes have become more socially acceptable, serve another purpose: as a gateway to mental health services. “To get a child qualified for SSI disability, it is helpful to have a child on a medicine,” he said, referring to the federal program that assists families of children who are disabled by illness.

Psychiatrist David J. Muzina, a national practice leader at pharmacy benefits manager Medco, said he believes direct-to-consumer advertising has helped fuel rising use of the drugs. As former director of the mood disorders center at the Cleveland Clinic, he encountered patients who asked for antipsychotics by name, citing a TV commercial or print ad.

Some states are attempting to rein in their use and cut escalating costs. Texas has announced it will not allow a child younger than 3 to receive antipsychotics without authorization from the state. Arkansas now requires parents to give informed consent before a child receives an anti-psychotic drug. The federal Centers for Medicare and Medicaid Services announced it is summoning state officials to a meeting this summer to address the use of antipsychotics in foster care. And Sens. Herb Kohl (D-Wis.) and Charles E. Grassley (R-Iowa) introduced legislation that would require doctors who prescribe antipsychotics off-label to nursing home patients to complete forms certifying that they are appropriate.

Medco is asking doctors to document that they have performed diabetes tests in patients taking the drugs. “Our intention here is to get doctors to reexamine prescriptions,” Muzina said.

“In the short term, I don’t see a change in this trend unless external forces intervene.”