The pastor of a small church, Sizemore had — with the tacit approval of some, but not all, local law enforcement — been offering clean syringes to drug users to help them avoid contracting HIV and hepatitis C. Now he could do so without fear of arrest.

Sizemore, who in 2007 launched Radiant Church, an affiliate of the Church of God of Prophecy, has sought to alleviate the effects of drug addiction, work that he sees as a natural extension of his other pursuits: feeding, clothing and otherwise offering sustenance to his parishioners and others in need.

Churches and other faith-based organizations have increasingly voiced approval of syringe exchange programs, sometimes launching their own. Their efforts have contributed to growing support for the programs, which the federal Centers for Disease Control and other health organizations see as a valuable tool in combating the opioid epidemic. Most programs include components such as education, treatment and testing for HIV and hepatitis C, which can be spread by sharing needles. Some also distribute naloxone to reverse overdoses.

The CDC offered further encouragement Nov. 29, reporting greater use of syringe exchanges by people who inject drugs. Even so, one-third of users cited in the CDC analysis reported in 2015 that they had shared a needle within the past year. Exchange programs allow drug users to turn in used syringes and get sterile ones.

While more than half of states have not explicitly authorized syringe exchange, Corey Davis with the Network for Public Health Law said that most have at minimum removed the prescription requirement for syringes. A number have “patchworks” of what’s permitted in terms of exchange and what’s not.

The North American Syringe Exchange Network, or NASEN, reports 228 syringe exchange programs operating in 35 states and Washington, D.C. But the number of programs is growing weekly in response to the rise in heroin overdose deaths across the country.

Neither NASEN nor the Harm Reduction Coalition has an estimate of the number of faith-based churches and organizations directly involved in syringe exchange, but momentum is clearly gathering. Church-based programs are operating in communities across the country, including Seattle; Cincinnati; Albany, N.Y.; and even in traditionally conservative southern states.

Institutions such as the United Methodist Church, Presbyterian Church (U.S.A.), United Church of Christ and National Council on Jewish Women have issued statements of support for syringe exchange.

“Ultimately, we want people to live without the burdens of addiction, but for many people the road to recovery is long and arduous, and protecting public health in the meantime is fundamental,” said Kara Gotsch, who until recently was director of advocacy for the Interfaith Criminal Justice Coalition.

Hillary Brownsmith researches and writes about faith-based harm reduction initiatives and helps run the Steady Collective, a mobile syringe exchange program in Asheville, N.C. The program is based at the Haywood Street Congregation, a United Methodist Church ministry, and has received funding from three other congregations.

Brownsmith has engaged ministers and churchgoers in theological conversations about reaching out to drug users, and said she’s received only positive feedback.

“I think the tide is definitely shifting,” she said, with church officials and congregants recognizing that syringe exchange is in keeping with soup kitchens, temporary shelters and other outreach ministries.

St. Paul’s Episcopal Church in Fayetteville, Arkansas, launched its syringe exchange program last November. Shelby Carrothers, a church member, saw the need for one while offering HIV testing during a weekly free hot meal. She discovered that most of the people being tested identified as IV drug users.

Carrothers said that while providing clean syringes is a critical service, “Almost equally important is that we provide a nonjudgmental space to talk about what they’re going through and answer questions that they might otherwise be afraid to ask.”

Sherman Terry, 40, is among those who’ve found help at St. Paul’s. A former IV drug user, he came for a hot meal and has received a lot more.

“Shelby, bless her heart …” Terry said during a recent Wednesday lunch at the church, recounting how Carrothers had introduced him to a variety of support services. No longer an IV drug user, Terry now advocates in the community for safe sex, clean needles, healthy living in general. 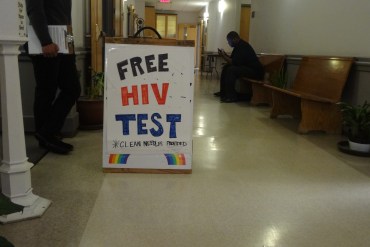 Carrothers distributes some 300 to 400 syringes each week. But the need to help IV drug users continues to mount. She’s now talking with a Lutheran church in Fayetteville and Episcopal churches in Little Rock about hosting exchanges.

In North Carolina, James Sizemore tells of his own circuitous route to harm-reduction advocacy.

President of his high school’s “Just Say No” club, Sizemore went from being a Duke Divinity School student to a cocaine mule, transporting kilos from Miami to North Carolina. For five years, he struggled with addiction. Once free of drugs, he found his way back to the pulpit.

Disenchanted with mainstream churches — which, he perceives, too often fail to embrace the marginalized members of their communities — Sizemore started his own, in a section of Fayetteville marked by poverty and drug use.

Syringe exchange fits into his church’s primary mission, tending to an array of immediate needs.

You can’t “preach salvation” to someone who’s in the throes of addiction, battling for their life, or turning tricks to feed their kids, Sizemore said. “They’re not interested in hearing anything about the spirit because they’re concerned about these issues first.”

“Slowly, but surely,” he said, “we established a good enough relationship in the neighborhood that they trusted us enough to care for them spiritually.”