WEST PALM BEACH, Fla. — On the day abdominal pain and nausea struck Jessica Christianson at the office, she discovered how far telemedicine has come.

Rushing to a large kiosk in the lobby of the Palm Beach County School District’s administrative building where she works, Christianson, 29, consulted a nurse practitioner in Miami via two-way video. The nurse examined her remotely, using a stethoscope and other instruments connected to the computer station. Then, she recommended Christianson seek an ultrasound elsewhere to check for a possible liver problem stemming from an intestinal infection.

The ultrasound Christianson got later that day confirmed the nurse practitioner’s diagnosis.

“Without the kiosk I probably would have waited to get care and that could have made things worse,” she said.

Endorsements like Christianson’s demonstrate how technology and positive consumer experiences are lending momentum to telemedicine’s adoption in the workplace.

Less than a decade ago, telemedicine was mainly used by hospitals and clinics for secure doctor-to-doctor consultations. But today, telemedicine has become a more common method for patients to receive routine care at home or wherever they are — often on their cellphones or personal computers.

In the past several years, a growing number of employers have provided insurance coverage for telemedicine services enabling employees to connect with a doctor by phone using both voice and video. One limitation of such phone-based services is physicians cannot always obtain basic vital signs such as blood pressure and heart rate.

That’s where telemedicine kiosks offer an advantage. Hundreds of employers — often supported by their health insurers — now have them installed in the workplaces, according to consultants and two telemedicine companies that make kiosks, American Well and Computerized Screening, Inc.

Employers and insurers see the kiosks as a pathway to delivering quality care, reducing lost productivity due to time spent traveling and waiting for care, and saving money by avoiding costlier visits to emergency rooms and urgent care facilities.

Jet Blue Airways is adding a kiosk later this year for its employees at John F. Kennedy International Airport in New York. Other big employers providing kiosks in the workplace include the city of Kansas City, Missouri.

Large health insurers such as Anthem and UnitedHealthcare are promoting telemedicine’s next wave by testing the kiosks at worksites where they have contracts. 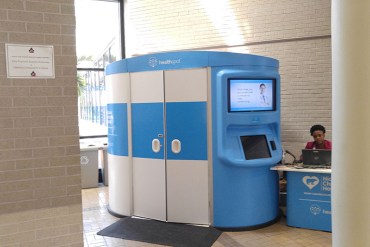 Anthem has installed 34 kiosks at 20 employers in the past 18 months. John Jesser, an Anthem vice president, said kiosks are a good option for employers too small or disinclined to invest hundreds of thousands of dollars in creating an on-site clinic with doctors and nurses on standby.

“This technology should make it more affordable for employers of many sizes,” Jesser said.

Kiosks are typically used for the same maladies that lead people to see a doctor or seek urgent care — colds, sore throats, upper respiratory problems, earaches and pink eye. Telemedicine doctors or nurse practitioners can email prescriptions to clients’ local pharmacies. Employees often pay either nothing or no more than $15 per session, far less than they would pay with insurance at a doctor’s office, an urgent care clinic or an emergency room.

Despite kiosks’ growing use in telemedicine, it’s unclear whether they will be supplanted as smartphones, personal computers and tablets enable people to access health care anywhere with a Wi-Fi connection or cell service. Some employers already offer kiosk and personal device options, including MBS Textbook Exchange in Columbia, Missouri, which has 1,000 workers.

Workplace kiosks’ appeal is they are quiet, private spaces to seek care. Consumers can get their ailments diagnosed remotely because the kiosks are equipped with familiar doctors’ office instruments such as blood pressure cuffs, thermometers, pulse oximeters and other tools that peer into eyes, ears and mouths. The instrument readings, pictures and sounds are seen and heard immediately by a doctor or nurse practitioner.

While kiosks are now found in more workplaces, usage is still relatively low because employees are not sure how they work, said Allan Khoury, a senior consultant with Willis Towers Watson.

Officials in Kansas City, Missouri, estimate the kiosk placed in city hall almost a year ago has saved the local government at least $28,000. That’s what Kansas City hasn’t spent because employees and dependents chose the telemedicine option instead of an in-person doctor visit. The city also estimates it has gained hundreds of productive work hours — that’s the time employees saved by not leaving work to see a doctor.

In contrast, fewer than 175 of the 2,000 employees at the Palm Beach County School District headquarters have used the kiosk there in its first year, said Dianne Howard, director of risk management.

Howard remains hopeful: “This is the future of health care.”

The district’s kiosk was supplied at no cost by UnitedHealthcare, as part of a test also involving two other employers in Florida.

Those kiosks connect employees to nurse practitioners at Nicklaus Children’s Hospital in Miami. The hospital employs an attendant at each kiosk location to help workers register and use some of the instruments, such as the stethoscope.

Other telemedicine kiosks, such as those made by America Well, are designed to be totally self-service for employees. They also offer users immediate access to a health care provider. American Well has deployed about 200 kiosks and is in midst of rolling out 500 more, mostly to employers, the company said. It also places kiosks in retail outlets and hospitals.

Telemedicine’s increasing sophistication is winning over some traditional-minded physicians.

The WEA Trust in Madison, Wisconsin, a nonprofit that offers health coverage to public employers, installed a kiosk for the benefit of its 250 workers last fall.

Dr. Tim Bartholow, a family doctor by training and chief medical officer for the trust, said he was cautious about physicians treating patients they haven’t seen in person. After observing employees using it, Bartholow is convinced it can help them get good care.

“I don’t think telemedicine is making a doctor being on site quite agnostic, but it is certainly reducing the premium on being in the same space as the patient,” Bartholow said.

Insurers declare they are moving carefully, too, recognizing that telemedicine has its limits and they must depend on practitioners to tell patients when they have to see a doctor — in person.

“We have to rely on their experience and judgment,” Jesser said.

Office Chatter: Your Doctor Will See You In This Telemedicine Kiosk