Ever since the Affordable Care Act’s health insurance marketplaces opened for business in 2014, the Obama administration has worked hard to make sure Americans sign up. Yet officials now are telling some older people they might have too much insurance and they should cancel their marketplace policies.

The federal Centers for Medicare & Medicaid Services is targeting two groups. First the agency is sending emails each month to about 15,000 people with subsidized marketplace coverage. The messages arrive a few weeks before their 65th birthday, which is also the age most people become eligible for Medicare. The email reminders will go to enrollees in the 38 states that use the federal marketplace.

And last month, CMS also began sending letters to people already covered by Medicare but also enrolled on the marketplace and getting financial assistance. The letters, required under the federal health law, say they can keep dual coverage — without subsides — but urges them to discontinue their marketplace policy, since in most cases it duplicates their Medicare benefits. If marketplace enrollees don’t respond, eventually officials can cancel the subsidies.

The 13 state-operated marketplaces must also find and notify people with overlapping coverage, although they are not required to contact beneficiaries nearing Medicare age. A small number of states, however, do that, including Maryland, Massachusetts and California.

California — which runs the largest state marketplace with 1.4 million members — has begun mailing letters to all beneficiaries 65 years old or turning 65 by Dec. 1, regardless of whether their insurance is subsidized. The letters were sent to about 20,000 members of the state’s marketplace, called Covered California, and include several sources of information if seniors have questions. 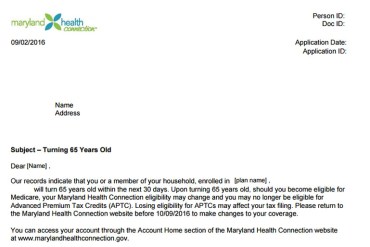 “We had received some feedback from our service centers and from stakeholders indicating that some consumers were unaware of the need to terminate their Covered California coverage once they enrolled in Medicare,” said Dana Howard, a spokesman for Covered California. The agency did not single out only beneficiaries receiving financial assistance because all beneficiaries can be affected if they don’t consider their Medicare options when turning 65, he said.

A Medicare official said the agency found a small number of consumers with overlapping coverage by comparing marketplace and Medicare enrollment data but declined to say how many.

Consumer advocates have praised CMS officials for the new efforts to help seniors avoid costly enrollment headaches. “People ages 55 to 64 are the largest segment of marketplace enrollees so we want CMS, as much as possible, to get in front of any problems that might result from mismanaged transitions,” said Stacy Sanders, federal policy director at the Medicare Rights Center.

Without a reminder, it’s easy to become tangled in problems that can never be completely unwound, as Beth Taxter, 66, learned last year.

Beneficiaries shoulder a lot of responsibility, even though there is no requirement they all be told what to do and when. Only the individual can terminate marketplace coverage when he or she becomes eligible for Medicare. Inaction means paying back any coverage subsidies received after they should have joined Medicare. 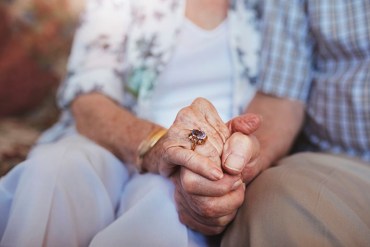 Seniors who don’t enroll in Part B three months before or after their 65th birthday will be hit with a permanent penalty. (iStock)

The self-employed Taxter, who lives outside Portland, Maine, thought she could keep her marketplace policy and didn’t have to sign up for Medicare because she was still working. Six months after turning 65, she went to a Southern Maine Agency on Aging meeting about Medicare.

“Much to my dismay, I heard things that made me think there might be some trouble,” she said.

The agency’s Mary Hadlock told Taxter that her marketplace plan does not exempt her from Medicare’s fines for signing up late for Part B coverage, which covers doctor visits and other outpatient services. She moved to rectify her insurance status but still faced consequences.

Seniors who don’t enroll in Part B three months before or after their 65th birthday will be hit with that permanent penalty — 10 percent of the monthly premium for each 12-month period they were late. (People who continue to work past the age of 65 for firms with more than 20 employees can delay getting Part B until they leave their jobs. They then have an eight-month window for signing up.)

But that’s not all. By law, seniors who are late enrolling in Part B can sign up only during January through March for coverage that begins the following July. While Taxter waited for her Part B coverage to kick in last July, she had no other option but to keep her marketplace plan — minus the subsidies that the federal government had been giving her to make it affordable.

Timing is everything, she now said. “When I turned 65, neither the marketplace the federal government nor the insurance company … let me know that I needed to sign up for Medicare” she said. “People get clobbered for not knowing what they don’t know.”

Officials Warn Some Older Marketplace Customers To Switch To Medicare