A battle is brewing in Ohio.

University Hospitals Chief Executive Tom Zenty warned a Cleveland audience that the state’s Medicaid expansion may not be permanent. “In July of next year, if there is no intervention, Medicaid expansion in the state of Ohio disappears,” Zenty said, during a recent panel discussion.

Following the Supreme Court decision about the Affordable Care Act in 2012, states could choose whether they wanted to expand Medicaid to people with incomes up to 138 percent of the federal poverty level, or about $16,100 for an individual enrolling in 2015. 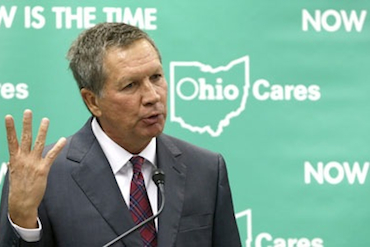 For months, Ohio’s Gov. John Kasich, a Republican, met with state lawmakers and tried to convince them that expanding the health coverage to more uninsured residents was good for both the state budget and the wellbeing of people.

He failed. Kasich never won approval from the full state legislature for expansion.

It turns out, Kasich could take a backdoor. Unlike other states, Ohio has a Controlling Board, which is made up of a smaller bipartisan group of state lawmakers who oversee adjustments to the state budget.

Kasich defied his party and asked the board to accept $2.5 billion in extra Medicaid funds from the federal government – effectively making expansion happen. But, there’s a catch: Medicaid spending must be reauthorized by state lawmakers as part the of the state’s two-year budget cycle, which ends in June. That could give the legislature power to rollback the expansion, if it votes to do so.

Zenty, who heads up the Cleveland hospital system affiliated with Case Western Reserve University, suggested that could be problematic. What if, he asked the audience, “The rug gets pulled out in July of next year?”

More than 367,000 newly eligible enrollees have signed on for Medicaid since expansion began in Ohio in January, according to the state Medicaid office. That enrollment gain in less than a year easily surpassed Kasich’s original projections that 366,000 Ohioans would enroll in Medicaid under expansion by July 2015.

Ohio Medicaid spokesman Sam Rossi attributed the surge to the federal deadline for residents to have health insurance as well as the state’s ability to clear a backlog of pending federal applications over the past few months. Other states, like California, have struggled with a backlog of Medicaid applications.

Ohio’s statewide enrollment also had a head-start from 26,000 new enrollees who switched to Medicaid from an early enrollment program at publicly owned MetroHealth System in Cleveland.

More than 2.7 million Ohio residents, or one in four of the state’s 11.6 million residents, are covered by Medicaid, according to Rossi.

In an interview after a recent event in Columbus, he said the Buckeye Institute sees the coming months as “an opportunity for us to kind of revisit the fight.”

“We continue to think that expansion is a bad idea,” Hederman said.

Hederman joined the Buckeye Institute in July after moving from the conservative Heritage Foundation in Washington, D.C. where he directed the organization’s center for data analysis.

He pointed to the example of Indiana, which has proposed a waiver program with extra requirements for enrollees. Unlike traditional Medicaid, Indiana’s proposal would require many new participants to make financial contributions toward the cost of coverage through high deductible plans with health savings accounts. But the Indiana proposal has met resistance from the Obama administration, and state and federal officials are trying to negotiate a deal.

“Medicaid should not be a straight-jacket policy from the national government,” Hederman said. He declined to talk specifically about what requirements he would want to see attached to Ohio’s Medicaid program, instead saying he “hopes” the state will see another fight over expansion.

“How that fight plays out next time, we’ll see,” he said.

When asked about the politics over Medicaid expansion in Ohio, DR. Ted Wymyslo, former state health director in Kasich’s cabinet, said, “It seems unbelievable doesn’t it?”

Groups on either side are pulling together and forming strategies, he said.

The fight over Medicaid expansion is “bringing people together like wars do quite often and you could look at this almost like that kind of a battle,” Wymyslo said.