Just up the freeway from Disneyland, in the Orange County city of Buena Park, Paul Leon stood outside the beat-up remnant of a seedy motel. Above him, a faded pink sign advertised the Coral Motel, whose rooms back in its prime cost 35 bucks a night.

“This particular motel was going to be taken back by the city of Buena Park, because of the drugs, alcohol, prostitution,” Leon explained.

But Leon, CEO of the Irvine-based Illumination Foundation, a homeless services nonprofit, had a different idea. He proposed turning the motel lobby into a triage center and converting the rooms into clean recovery facilities for homeless people recently discharged from the hospital. And that’s what he did.

It’s impossible for homeless people to recover from a health crisis when they just go back out onto the street after being discharged from the hospital. They end up returning repeatedly to emergency rooms and hospitals, which are very expensive.

Recuperative care centers are pricey to set up, but the motel model was just the opposite, Leon says.

“The beauty of this [is] it’s the poor man’s recuperative,” he said. “They’re not the Hyatt or the Hilton, but they do serve a purpose for us. The costs to run it are much less.”

The motel recovery room costs about half as much as a hospital would — about $2,000 less a day for each patient. And it’s like being at home. In fact, it may be even better than home, because it has a nurse on staff to help supervise care and handle complications.

Leon, who was trained as a public health nurse, launched the Illumination Foundation to provide precisely this type of care and links to the community. 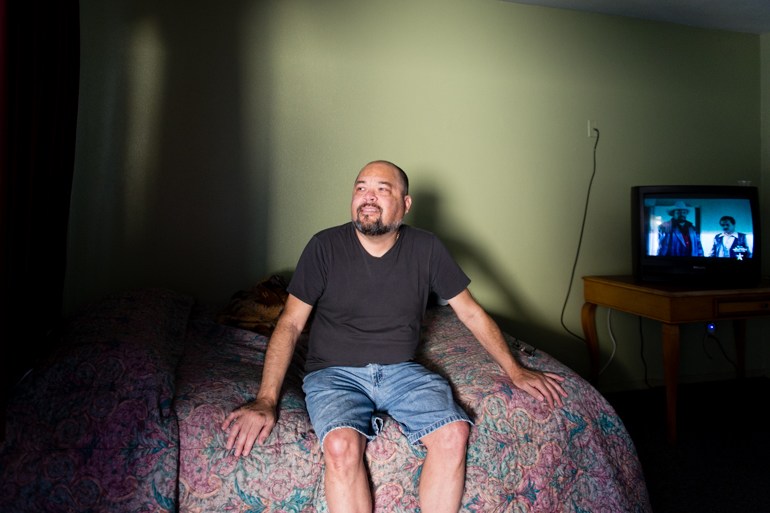 Quiñones in his room at the Coral Motel in Buena Park, Calif., in February 2016. After gallbladder surgery, Quiñones didn’t have anywhere to recover and ended up at the motel used by the Illumination Foundation Recuperative Care. (Heidi de Marco/KHN)

Elvin Quiñones, one of the patients at the Coral Motel, padded across the motel parking lot in flip-flops to show off his previous home — a small white Datsun B210 sedan.

Quiñones is a large man, and it’s hard to picture him crammed into the car along with his two dogs. In the days immediately following his gall bladder operation, he had to fit a bunch of medical gear, too.

“I’ll be honest, I was sleeping in front of the 24-hour Walmart, because they had a bathroom,” Quiñones recounted. “I still had a tube stuck inside me that was draining, so I needed someplace where I could empty out the drain.” Being homeless and helpless, he added, is something he’ll never forget. 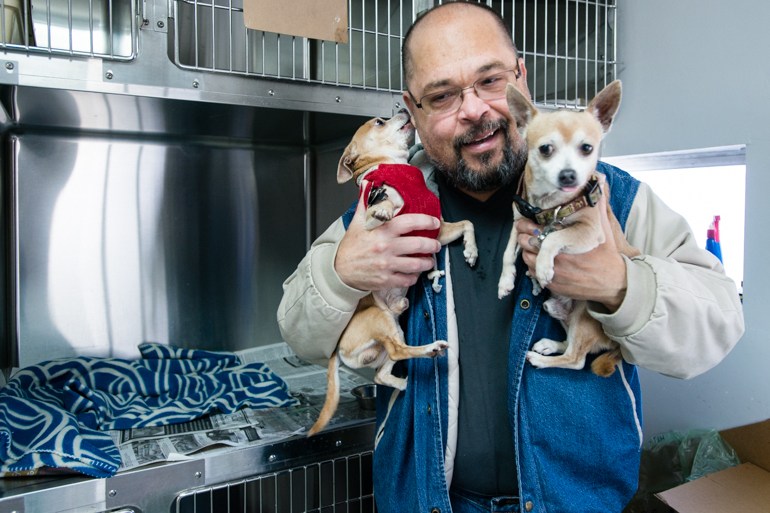 Quiñones visits his two chihuahuas at the Santa Fe Animal Hospital usually every other day. Quiñones put them in the kennel the day he became homeless. (Heidi de Marco/KHN)

A week after his medical release, the hospital called and helped place him in the motel.

“This is a new model of care for Orange County,” said Ginny Ripslinger, vice president of network of care at St. Joseph Health System.

Hospitals and health insurers help fund the motel-based care centers, Ripslinger said, because they save money by stabilizing these patients. The dollars they contribute are in addition to any payments from Medi-Cal, the state- and federally funded health program for people with low incomes.

Beyond the financial interest of hospitals, providing funding for this motel-based care is “just the right thing to do,” Ripslinger said. “We don’t want to discharge them to the street, and there’s an obligation on the hospitals to provide continuity of care and safe discharges.”

There’s also an added benefit to accommodating these homeless patients in motel rooms for two or three weeks.

“You might say they’re a [captive] audience,” Riplinger said. “We can then provide the social services and the linkages to the community for stable housing and get them in a protected environment.”

Leon said he has been working with dozens of cities across the country to establish similar models elsewhere.

“If you’re just starting and you don’t have a recuperative care program,” he said, “one easy quick method is to use motels. They could basically start within days to house some of the patients that are the most vulnerable.”

Every city has a homeless problem, Leon added, and every city has its own version of the beat-up Coral Motel. It’s a rare opportunity, he said, to turn two big problems into one solution.