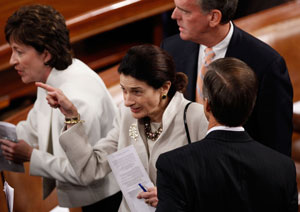 By signaling his flexibility last night on a government-run insurance plan, President Barack Obama gave new impetus to a fallback “trigger” approach that some believe could be essential to passing health care legislation this year.

In a nationally televised speech to a joint session of Congress, Obama said he would attempt to “keep insurance companies honest” by creating a not-for-profit public alternative to compete with them. But the president stressed that the public option was only a means to the end of eliminating discriminatory practices by insurers and making health coverage more affordable. “And we should remain open to other ideas that accomplish our ultimate goal,” he added.

One alternative under serious consideration, strongly promoted by Republican Sen. Olympia Snowe of Maine, would hold the public plan in reserve, activating it only if affordable insurance wasn’t made available to most Americans by the time the legislation is fully implemented in 2013. Some political analysts and health care experts say this fallback approach might be the best way for Obama and Democratic leaders to navigate the treacherous political waters of health care and get something enacted this year.

“If this trigger mechanism is what stands between getting a health reform plan and not getting one, it would be worth doing under those circumstances,” said Paul Van de Water of the Center on Budget and Policy Priorities, a left-leaning Washington think tank. “It would not produce a terrible result, but it would be less than [the public option] advocates want.”

Robert Moffit, a health policy expert at the conservative Heritage Foundation, said the trigger is a bad idea that has little to do with reducing the number of uninsured and making coverage more affordable and much to do with government’s effort to assert more control over health care financing and delivery.

“The reason why this whole thing is happening is that proponents of the public plan can’t win this debate,” Moffit said. “They want to set up this mechanism that will…automatically get what they can’t win today sometime tomorrow.”

In recent months, Obama has come under intense pressure from opposing factions within his party to take a firm stand on the public plan. Liberal Democrats say such a government-run insurance plan is essential to guaranteeing affordable insurance to most Americans. But many moderate and conservative Democrats agree with Republicans that a government-run plan would be a dangerous precedent that could undermine private insurers.

In his speech, Obama said, “I have no interest in putting insurance companies out of business” but that “I just want to hold them accountable” while making health insurance available to those who can’t afford it. “It’s worth noting that a strong majority of Americans still favor a public insurance option of the sort I’ve proposed tonight,” he said. “But its impact shouldn’t be exaggerated — by the left, or the right or the media. It is only one part of my plan, and should not be used as a handy excuse for the usual Washington ideological battles.”

He said he would remain open to other ideas that accomplish his goals, and urged Republicans to work with him to address their concerns, “rather than making wild claims about a government takeover of health care.”

In a specific reference to Snowe’s trigger proposal, Obama said that “some have suggested that the public option go into effect only in those markets where insurance companies are not providing affordable policies.” Others, he added, have proposed “a co-op or another non-profit entity to administer the plan. These are all constructive ideas worth exploring. But I will not back down on the basic principle that if Americans can’t find affordable coverage, we will provide you with a choice.”

Proponents have long argued that without the competitive pressure of a public option, private insurers would resist calls to lower premiums and eliminate such discriminatory practices as denying coverage to older Americans or people with pre-existing medical conditions. But with most Republicans and many moderate Democrats adamantly opposed to increased government involvement in the insurance market, Snowe and others insist that a trigger would be a reasonable compromise.

“I think it’s a good means of ensuring that people have access to affordable plans, ultimately,” Snowe said in an interview earlier this week. “It does inject a measure of competition but it also creates incentives because you know it’s there.”

Here’s how a trigger would likely work: Health care legislation would create a non-profit government corporation to assess what health insurance options are available to residents, how much those policies cost and whether they would be affordable to 95 percent of residents of every state in the country. It would be up to Congress to determine what was affordable, and lawmakers likely would set state-by-state, sliding-scale thresholds based on income and census data.

If affordable coverage were not available to 95 percent of a state’s residents, the government entity would give insurers a second chance to offer coverage at affordable rates. If they failed to do so, the agency would contract with hospitals, physicians and other health care providers to create a government-sponsored health insurance plan designed to help reach that 95 percent target. The government entity overseeing this public option would negotiate payment rates with doctors, hospitals and other health care providers that would likely be higher than those offered by the Medicare or Medicaid programs.

Snowe has conferred repeatedly with Obama and White House officials in the past week to try to work out the details of a trigger that would achieve several important goals: finding a way to placate conservative critics of the public option without alienating the president’s liberal base; using the threat of a public option to force the insurance industry to make reforms without forcing Democrats from conservative swing districts to vote for a bill with a public option, and keeping Snowe on board the health care overhaul effort in the face of what appears to be near-unanimous Republican opposition to comprehensive legislation.

Snowe said in an interview with MSNBC yesterday that she agrees with her Republican colleagues that a public option should not be part of the health care legislation, and that she had proposed the trigger to Obama as a way of breaking a political deadlock and moving the legislation along.

Several Republicans supported creation of the Medicare prescription drug benefit in 2003, which included a trigger provision that never went into place because the payment rates were high enough in the bill to lure insurers to offer coverage throughout the country. Many of those Republicans remain in Congress today and may take comfort in their earlier vote and the experience of the Medicare drug bill.

But the approach is far from cut and dried, and critics see many problems in working out the details. Some fear that, over time, political pressures could force the trigger mechanism to be used more than intended, which could disrupt market forces and possibly increase health insurance costs. Sen. Ben Nelson, a centrist Democrat from Nebraska whose vote is being eagerly sought by the Obama administration, has said he might go along with health care legislation with a public option trigger, provided it wasn’t “a hair trigger” easy to pull.

Creating a trigger could cause problems in the marketplace, said Dean A. Rosen, who was chief health care advisor to former Senate Majority Leader Bill Frist, R-Tenn.

“I worry that once you have that mechanism in place it could be triggered by the government or by Congress in the future by lower criteria or different criteria.,” he said. “What happens once the government comes in after a certain number of years? If it went away how would it go away? If it went away would that be disruptive to coverage?”

Some insurers worry that provisions in the pending health care bills, such as those limiting an insurer’s ability to vary premiums by age or proposed fees on industry, may make policies more expensive for people to buy. “There are a lot of pieces that are important and if things aren’t designed properly it’s going to have an affordability problem,” said Alissa Fox, senior vice president, office of policy and representation, for the Blue Cross and Blue Shield Association. “There are a lot of moving pieces here that have to work, so we’re very wary of the trigger.”

But proponents of a trigger say that putting a public option in place immediately could lead to fewer rather than more choices for consumers. In smaller states where one insurer may currently have a large share of the market, inserting a government-run public plan would provide little incentive to insurers to enter the market because they would fear that they could not compete against a well-established insurance carrier and the federal government. A February 2009 Government Accountability Office report found that, when combined, the five largest carriers in the small group market represented three-quarters or more of the market in 34 of the 39 states that participated in the GAO survey. Those companies represented 90 percent or more of the market in 23 of those states, GAO found.

House Speaker Nancy Pelosi, D-Calif., has repeatedly declared it would be impossible to pass a bill in the House that doesn’t include a strong public option. And she has warned that the insurance industry would be better off accepting a public option now rather than taking a chance on facing a “tougher” public option down the road under a trigger mechanism.