PINEVILLE, W.Va. — Every other month, Tanya Nelson travels 32 miles from the heart of Appalachia’s coal country for an appointment with the nearest psychiatrist for therapy and to renew prescriptions. But the commute, which should take less than an hour through the winding mountain roads of southern West Virginia, consumes her entire day.

Nelson, 29, needs treatment for bipolar disorder, depression and anxiety. But she does not drive, so she must use a van service to keep her appointments. It makes numerous stops along the highway, picking up other travelers, and usually doesn’t return to her home in New Richmond, W.Va., until day’s end.

“I’ll call and tell them I’m ready [after my appointment ends], but they tell me they’re waiting for someone else,” Nelson said as she described a typical trip.

Nelson is among many area residents who do not drive. Patricia Hagerman, 63, of nearby War, W.Va., has relied on her sister for the past 11 years to drive her about an hour each way to the nearest psychiatrist — in Princeton, W.Va. She makes the trip once every two months for depression and anxiety treatment.

“I don’t want to go,” Hagerman said, “But I do go. [Seeing the psychiatrist is] worth the trip.” 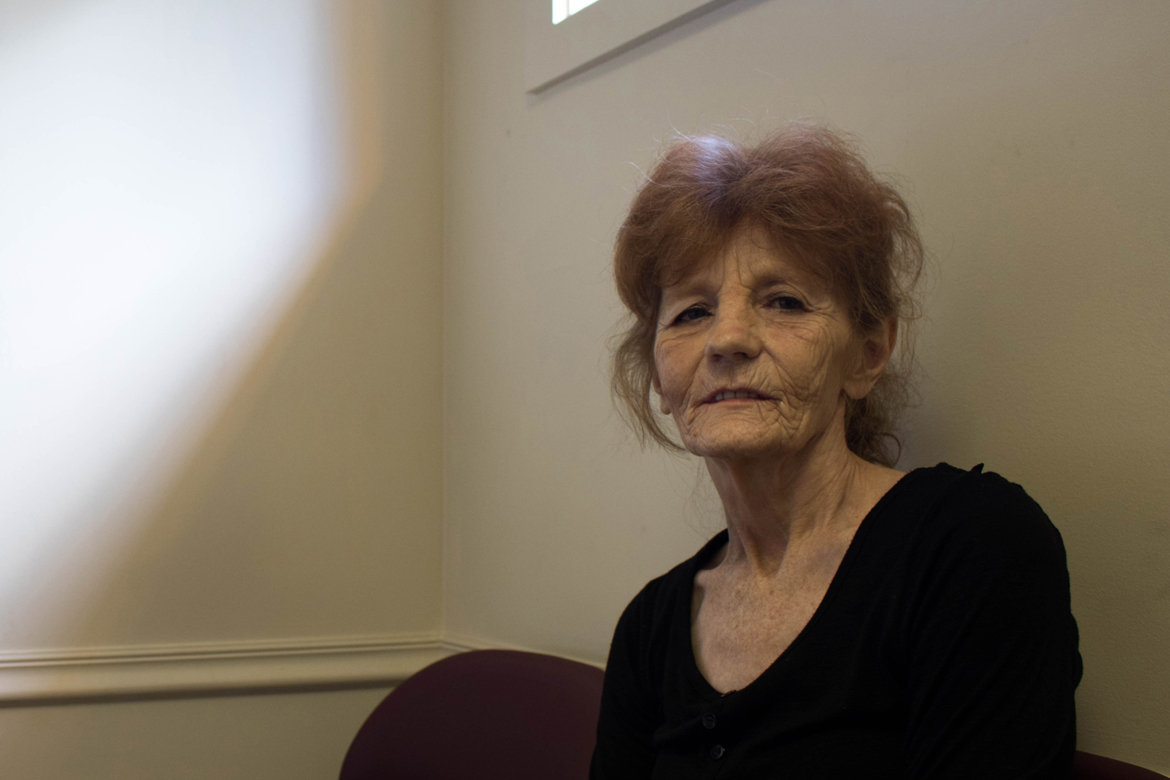 Patricia Hagerman waits for her appointment at the Tug River Health Association’s Gary Center. For the past 11 years, her sister has driven her to psychiatry appointments in Princeton, W.Va., about an hour away, for treatment for Hagerman’s depression and anxiety. (Vickie Connor/KHN)

Getting mental health services here is fraught with challenges. But the need is great.

There are no psychiatrists in Wyoming County. A handful of small, general medical practices, a small telemedicine program and a few behavioral health specialists handle services for the 21,763 residents. Patients’ issues — ranging from depression, anxiety, addiction and other mental health concerns — are aggravated by the local economic downturn.

“As a family doctor, I’m doing way more psychiatry than I am comfortable with,” Bailey said. She sends patients like Nelson, who need more specialized help, to the closest psychiatrist in Beckley, W.Va. In addition to the transportation hurdle, it can take a month or more to get an appointment. 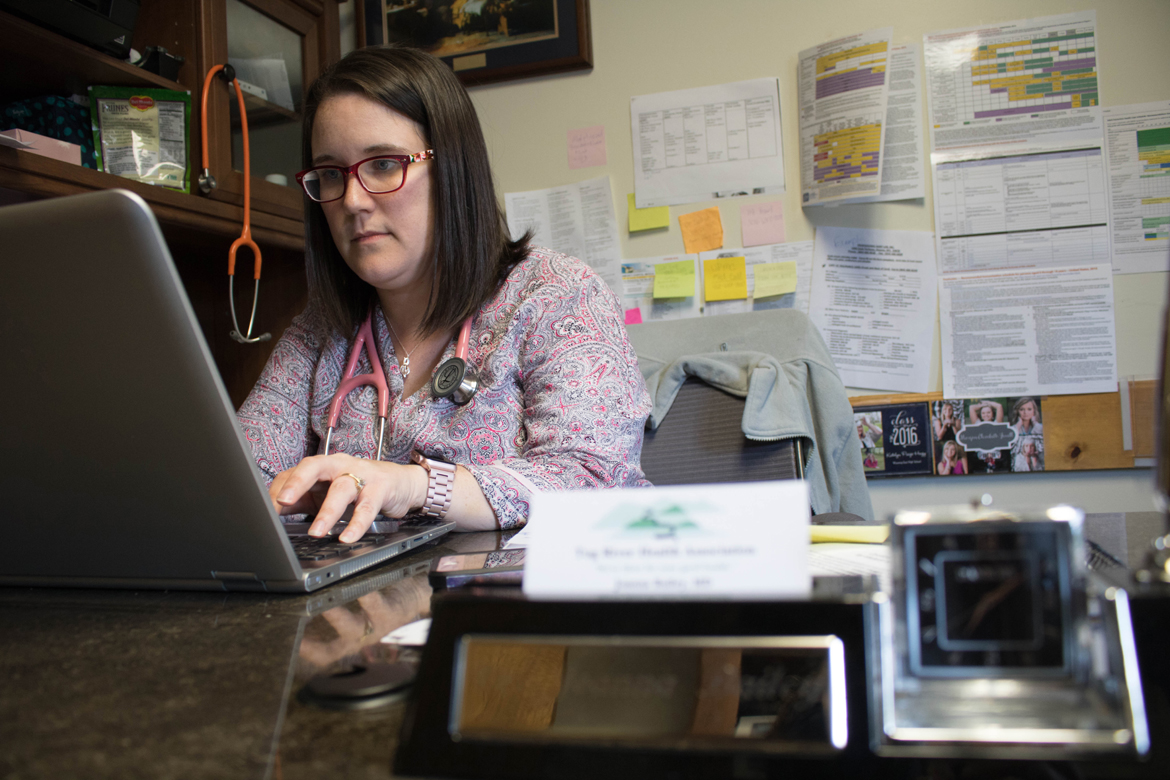 Dr. Joanna Bailey says about 30 percent of cases involve treatment for mental health issues. “As a family doctor, I’m doing way more psychiatry than I am comfortable with,” she says. (Vickie Connor/KHN)

Bailey practices in both Wyoming and McDowell counties — Appalachian areas once fueled by a booming coal industry. Today, much of the local economy relies on tourists coming to use the area’s ATV trails. Infrastructure has been neglected. Shops have been boarded up and abandoned. Medicaid enrollment is roughly 35 percent in Wyoming County and 48 percent in McDowell County, according to the advocacy group West Virginians for Affordable Health Care.

She said about 30 percent of her caseload is treatment for mental health issues.

As someone who was born and raised in Wyoming County and has witnessed the economic slide, Bailey understands many of the issues her patients face.

The coal industry, which was once king in this region, has been declining for years. “So, we’ve lost a lot of people, and that’s depressing,” Bailey said. “We haven’t had growth, and a lot of people are unemployed right now. That’s traumatic to families on every level.”

When parents with mental health disorders go untreated, a “vicious cycle” is set in motion, she said. “Those children grow up with the same mental health issues because they’ve watched the same unhealthy relationships their whole life,” Bailey said. “It’s just a cycle of abuse and trauma.” 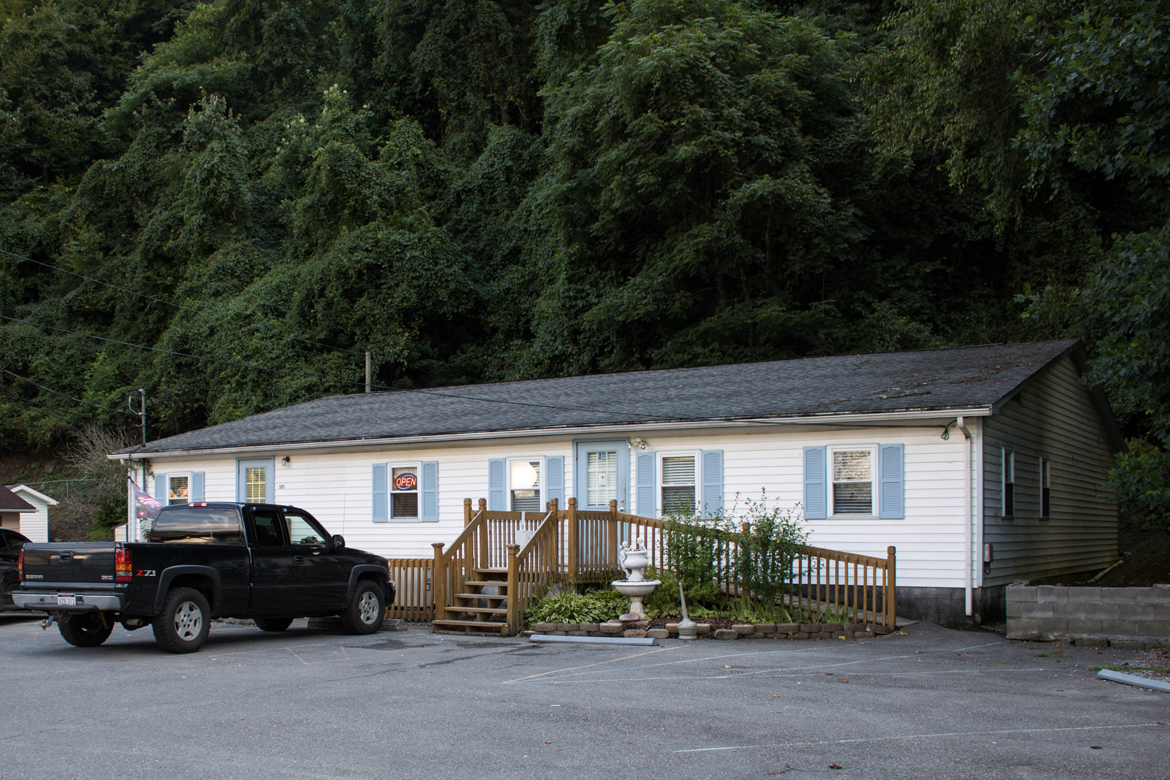 Bailey practices at the Tug River Catterson Center in Pineville, W.Va., and another facility in neighboring McDowell County. (Vickie Connor/KHN)

Joy Butcher-Winfree works alongside Bailey as the sole clinical psychologist within their practice. She usually handles about nine behavioral health cases each day.

“I only have so much time and only so much energy,” Butcher-Winfree said. “It’s very overwhelming most all the time. … If someone is in a crisis, they need more than that 15-, 30- or 45-minute slot.”

One resource for patients is the Southern Highlands Community Mental Health Center, which also accepts Medicaid patients. The Wyoming County location serves about 400 people, according to clinic administrator Rebecca Marsh. It offers therapy sessions and counseling, among other services, such as group support meetings and community engagement programs. Yet Marsh said she has trouble hiring employees.

“It’s difficult for folks from surrounding areas to drive to this area to provide the services that are needed,” Marsh said.

Also, the telepsychiatry program at West Virginia University recently received a federal grant to initiate psychiatric services in Wyoming and McDowell counties through video conferences.  The funding covers one half-day of clinical services per week to focus on psychiatric, psychological and pediatric services for school-age patients, according to Kari Law, director of telepsychiatry at West Virginia University.

Study after study shows health markers in Appalachia lagging. In August, an analysis in the journal Health Affairs found a widening gap comparing health indicators such as infant mortality and life expectancy in Appalachia with the rest of the country.

Also in August, research released by the Appalachian Regional Commission highlighted the area’s high mortality rates in seven of the nation’s leading causes of death — including suicide. It also showed the region has fewer health care professionals compared with the rest of the country, specifically mental health care providers.

She said some cases make her nervous about whether she has the background to provide sufficient care. One of those is depression in adolescents. She said she prescribed one patient the antidepressant Prozac but fears that a bad reaction to the drug led the teen to attempt suicide.

Since that episode, “it makes me more nervous,” Bailey said. “But you know, at this point, I’m a month out of being able to get people in [to see a psychiatrist], unless I’m sending somebody to the hospital.” 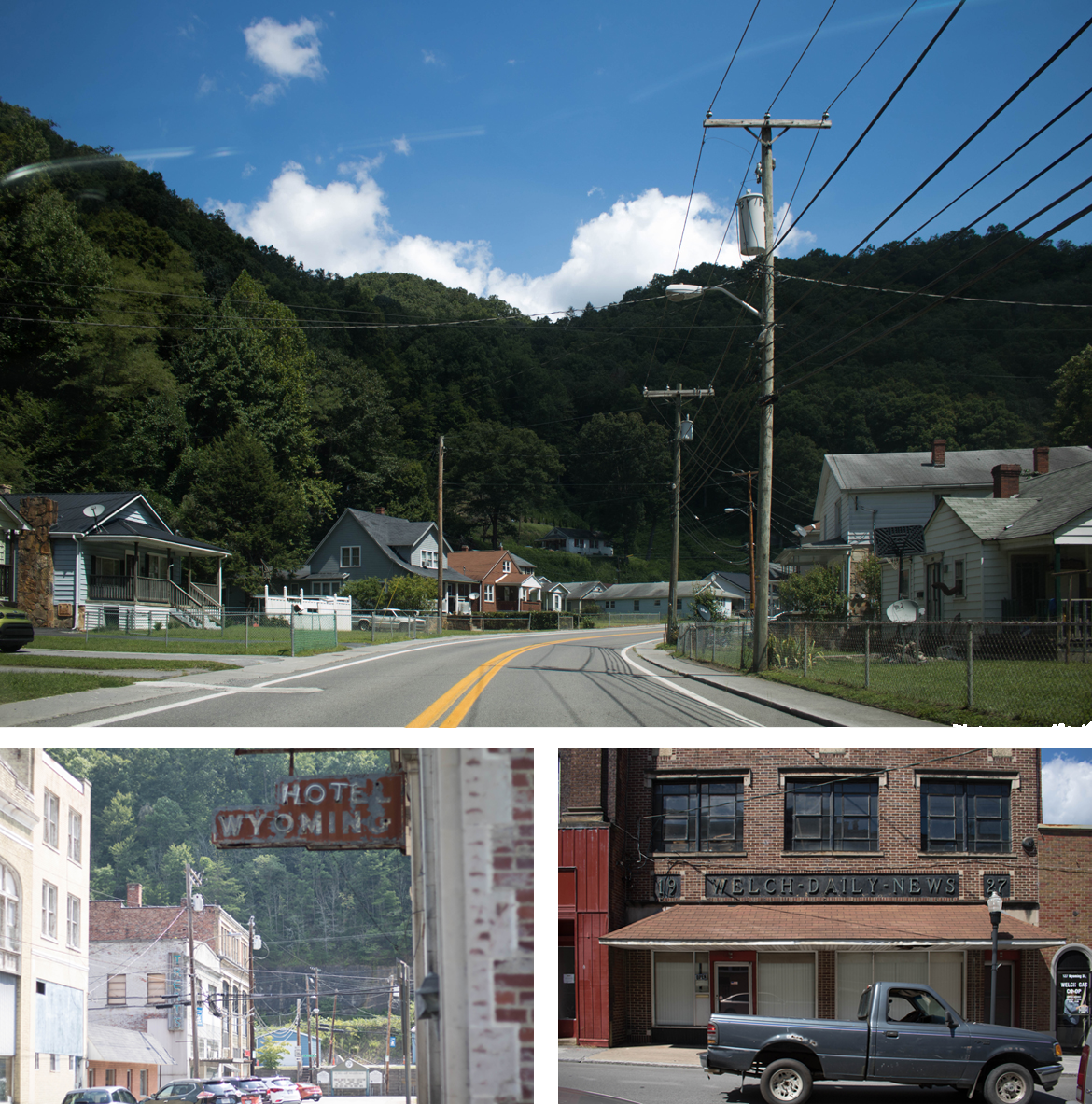 McDowell County’s rugged beauty partly masks the scars from the loss of the once booming coal industry. The economic decline has contributed to a shortage of mental health options for local residents, who often must often travel over winding mountain roads to larger cities to see specialists. The Hotel Wyoming, lower left, has been abandoned in Mullens, and the Welch Daily News in Welch, W.Va., is one of the few businesses that operates in the town. (Vickie Connor/KHN)

Most of the patients whom Bailey and Butcher-Winfree treat are insured by Medicare or Medicaid. The poverty level in Wyoming and McDowell counties is about 23 percent and 35 percent, respectively, according to 2015 figures from the Census Bureau.

The practice is a federally qualified health care center. It offers a sliding fee scale based on the patient’s ability to pay for those who live at or below the federal poverty level and receives federal subsidies for providing care to an underserved area. That funding is pivotal in helping to keep the practice financially viable, Butcher-Winfree said.

“For a private practice, it would be absolutely impossible to make a living and reimburse student debt,” she said.

She added that the rural location deters doctors as well. Butcher-Winfree drives an hour and a half each day from her home in Mercer County to the clinic.

One resource Bailey said will soon help is the Extension for Community Healthcare Outcomes (ECHO) program through West Virginia University. Specialists at the college are available for rural health care providers to consult on cases.

Bailey participates in the ECHO programs on hepatitis C and chronic pain. Soon she will be in a psychiatry program as well.

She said she presents patients’ cases to the hub participants, who in turn make suggestions for her.

“We can implement the care they would be receiving at a specialty center,” Bailey said. “That has helped drastically. But it’s still not quite enough yet.”

Update: This story was updated on Oct. 23 to add information about a telemedicine program that provides mental health support for some school children.

On Back Roads Of Appalachia’s Coal Country, Mental Health Services Are As Rare As Jobs