When Stacey Richter’s husband recently landed in a New Jersey emergency room, fearing a heart attack, she had an additional reason for alarm: a potential big bill from the hospital if the ER wasn’t in his insurer’s network.

So she took an unusual step. Instead of simply signing the hospital’s financial and treatment consent form, Richter first crossed out sections calling for her to pay whatever amount the hospital charged. She wrote in her own payment rate of a “maximum of two times” what the federal government would pay under Medicare, which is in the ballpark, experts said, of what hospitals might consider an acceptable rate.

“And then I signed it, took a picture of it and handed it back to them,” said Richter, co-president of the consultancy Aventria Health Group.

Advocates say such consent-form alterations could provide some protection from surprise bills, though there are several major caveats to this largely untested idea.

These bills — often called “balance bills” — happen when out-of-network providers charge more than insurers pay and patients are responsible for paying the balance. Lawmakers say they are considering ways to help, but legislation stalled in Congress late last year. And though some states have balance-bill laws in place, they don’t apply to many patients with job-based insurance.

Richter and other proponents say patients should look to state contract law for protection.

What few patients realize is that admission and financial forms serve as contracts detailing that the hospital will provide certain services and patients will pay for them. Those forms often specify that patients are responsible for “total charges.”

In those cases, providers often bill full “charges,” which are amounts set by the providers themselves and can be several times higher than what insurers or Medicare generally pay. Privately insured patients — generally, not Medicare patients — can be held responsible for the balance.

But, by writing in their own limits, patients might have leverage in negotiations or even in courts if out-of-network payment disputes arise, or at least proof they didn’t agree to pay the total charges, say advocates and some legal scholars.

Patients who try this could still get hit with a large balance bill. But “the difference is you can say ‘I offered this, but they refused it,’” rather than signing the original agreement to pay all charges, said proponent Al Lewis, CEO of Quizzify, an employee health care education company.

He came up with the twice-Medicare benchmark, even putting suggested wording for patients to print and carry with them on downloadable wallet cards, because he says it’s an amount that’s defensible.

If a hospital later turns down “two times Medicare and it goes to court, their lawyer is going to say, ‘We could lose this thing,’” said Lewis.

Such efforts are best applied only in emergencies — where federal law requires hospitals to stabilize patients and not toss them into the parking lot — no matter their ability to pay. However, patients who refuse to sign documents or try to alter them in nonemergencies — say, at a doctor visit or for elective surgery — could be refused service.

Even in emergencies, there is no guarantee the hospital will later agree to limits proposed by patients on what it can charge for out-of-network care.

“It’s a hard argument to make if the patient changes it unilaterally,” said Ericka Adler, a partner at law firm Roetzel & Andress in Chicago, who represents physician group practices, including those who work out-of-network in hospitals. “It won’t be a valid contract unless both parties sign it.”

She has not had this happen with her hospital-based clients. But with office-based physicians in nonemergency cases, some patients have tried writing caveats onto their forms.

Still, some legal scholars question the premise that hospitals’ financial consent forms are themselves valid contracts. That’s because contract law requires “mutual assent,” something law professor Barak Richman said patients can’t really give because they are seldom told the true price of care upfront, before signing.

“There’s something deeply exploitive about the process,” said Richman, who studies contract law and teaches at Duke University Law School. 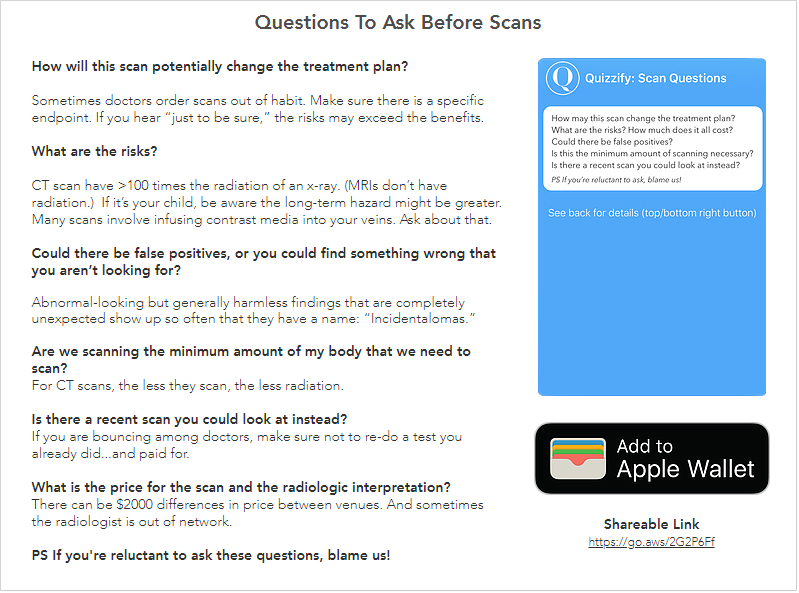 Al Lewis, CEO and co-founder of employee education consulting firm Quizzify, recommends that patients always carry this wallet card. It displays suggested wording that he says might help reduce the amount they could be billed for out-of-network emergency care. He emphasizes its value in emergencies because, under federal law, patients with true emergencies must be treated until stabilized, regardless of their ability to pay.(KHN Screenshot of Quizzify's website)

Still, he noted that judges often “are far too deferential to these contracts” when disputed balance bills end up in court, especially the vague wording that patients “promise to pay all charges.”

If patients alter the wording with their own terms — so long as they agree to pay what is considered a reasonable amount — then judges may also look to that added language, said Richman.

“This is not crazy by any means,” said Richman. “To the degree that courts rely on specific language of the admission contract, then this should be a successful strategy.”

But it isn’t easy to speak up, particularly in emergencies, which are already fraught.

“I believe it would be legally effective,” said Mark Hall, a professor of law and public health at Wake Forest University. “However, it requires patients to be much more astute and well prepared than is typical in most surprise billing situations.”

Richter said she had to endure some “toe-tapping” by an impatient administrator when she insisted on a paper copy of the consent form, rather than signing on the computer pad offered.

As it turned out, there was no additional bill for her husband, who gets his insurance through his job. The couple doesn’t know if that’s because everyone who saw him was in-network, or if it was her proactive stance on the forms.

“I am one who will not be peer-pressured,” said Richter.

“No one thinks we can solve this national epidemic of surprise bills with individual court cases,” he said. “But what this does could create an awareness of what people are signing” when they receive care.

One Defensive Strategy Against Surprise Medical Bills: Set Your Own Terms