When the Affordable Care Act rolled out last year, Californians enrolled in both Covered California and expanded Medi-Cal in high numbers. But there are still millions without insurance. Undocumented people don’t qualify for Obamacare benefits. Many others still find coverage too expensive or face other obstacles to enrolling.

One of those people is Leaburn Alexander. I meet up with him at 6 a.m. as he is finishing his shift as the night janitor at a hotel near the San Francisco Airport. He clocks out just in time to catch the hotel’s shuttle back to SFO, where he will catch a bus.

“Right now, I’m on the beginning of my commute,” he tells me. “After an eight-hour shift, my commute is like two-and-a-half hours.”

I accompany Alexander on his commute to East Palo Alto, about 20 miles south. It actually takes us three hours, on the hotel shuttle plus three more buses. He does this commute five days a week because he doesn’t have a car. The train would be faster, but it costs three times as much. Alexander has no wiggle room in his budget. 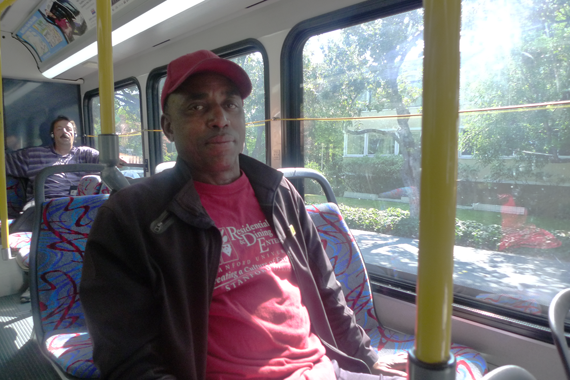 Leaburn Alexander works two jobs and does not have health insurance. Here, he is on the start of his 3-hour commute home from the job he works as an overnight hotel janitor. (Photo by Lisa Morehouse/KQED)

He says he makes just under $11 an hour, and after taxes, child support and other expenses, he brings home just enough to cover rent. And all the other bills? He has a second job to cover those. His wife has been looking for work for over a year, and his oldest daughter is in college. There’s no room in the budget for health insurance.

“When I first got this job,” he says, of his night janitor position, “they informed me about different employee packages, different benefits and all that.”

But Alexander says he can’t afford the employee portion of the premium. Many people who are working lower-wage jobs may qualify for Medi-Cal, California’s version of Medicaid, if their incomes are low enough. But because Alexander had been turned down for Medi-Cal in the past, he presumed he still wouldn’t qualify, despite the broader eligibility under Obamacare. He hasn’t had time to check.

Earlier this year, he went to get a physical at a community clinic, and they tried to sign him up for a county program. But even the $20 a month payment was too steep for his budget.

While he’d like to be insured, Alexander, 53, says he feels pretty healthy.

“I mean, there’s times where I’d be tired from fatigue and my age, a little arthritis, but I still feel pretty good,” he says. “But what might be going on inside of me is a different story.”

Alexander’s blood pressure is high. He got free pills free from a clinic and plans to return when he runs out.

The only time in his adult life when he had health care was when he was incarcerated. He had substance abuse issues and was involved in a bank robbery. He says he had tried recovery programs, but didn’t succeed, until he became a born-again Christian.

“That was divine intervention. It really happened,” he says. “I’ve been clean and sober since July, 2011.”

Uninsured Californians fall into a few categories, says Laurel Lucia with the U.C. Berkeley Labor Center. One is called the “family glitch.”

“Basically spouses and children who can get coverage through a family member’s employer but it’s too expensive,” she says.

Sometimes the employee part of the premium is affordable, but the family coverage is much higher. But because the employer made an offer of insurance to family members, “(w)hen they go to Covered California they’re told they’re ineligible for subsidies,” Lucia says. It’s part of federal policy.

A second uninsured group is people who are eligible for subsidies through the ACA marketplace — but they still find the premiums unaffordable.

Finally, Lucia says there may be nearly 1 million Californians who are eligible for Medi-Cal but don’t know it, or have had difficulties enrolling.

It’s unclear exactly which category Alexander may fit into.

Over in East Palo Alto, Irais Bazan is an enrollment and eligibility manager at the Ravenswood Family Health Clinic. Bazan has met people in all of those uninsured categories — and more.

“Situations can change at any minute,” she said. “So we’re adamant with clients, any changes, as little as you may think” must be reported right away.  “Sometimes these rules for these programs change.”

And someone who thought he wasn’t eligible for Medi-Cal or subsidies before may be eligible now. That may describe Leaburn Alexander. But while coming back to the clinic sounds like a minor hassle to most people, for Alexander, it’s a big barrier.

“Scheduling time to do that, an appointment. It’s kind of rough, kind of hard right now,” Alexander says.

Just as Alexander has no wiggle room in his budget, he has precious little extra time in his schedule. After he wraps up his overnight janitor job, he heads to a second job, washing dishes at a Stanford dining hall. He has one full morning off each week, but that time is taken up with other needs of daily life.

“Come Wednesday,” he says, about his morning off, “that’s when my pastor comes and gets us and takes us grocery shopping.”

Alexander remains optimistic that his situation will improve.

“I’m hopeful that through prayer that God will bless me with a better paying job,” he told me.

Lisa Morehouse produced this story while participating in The California Endowment Health Journalism Fellowships, a program of USC’s Annenberg School of Journalism.

One Man Explains Why He Is Still Uninsured