Skip to content
This story is part of a reporting partnership that includes Colorado Public Radio,

Uncle Sam wants you to email your doctor. A federal law passed in 2009 says that physicians have to start offering their patients online communication, or Medicare will start docking how much it pays them in the future. 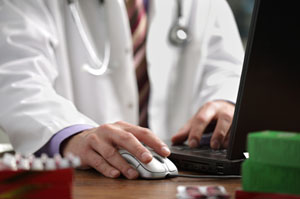 Some patients hope that having online access to their doctors will mean they can cut down on how often they have to go to the doctor’s office. But new research suggests that patients with online access actually schedule more office visits.

Dr. Ted Palen is an internist at Kaiser Permanente Colorado in Denver. He says it’s pretty common for him to see a patient in his office, and then think, “you know, we could’ve handled this by e-mail.” (Kaiser Health News is not affiliated with Kaiser Permanente.)

Palen, who’s also a researcher, wanted to see if offering patients online access to their doctors would mean they’d need to come in to the office less often. Previous studies found around a 20 percent drop in patient visits once they had online access.

But Palen’s much larger study, just published in the Journal of the American Medical Association, showed that patients with online access actually scheduled more visits.

“The finding really did surprise us, this association between online access and an increase in in-person services,” Palen says.

Why the increase? Palen says that it could be that patients who signed up for online access were sicker than those who didn’t, although his study tried to control for that. It could be that doctors who aren’t used to an online give-and-take with patients asked them to come in more often to clear things up.

Or it could be that the new online relationship between doctors and patients means that, together, they’re catching important health indicators that were getting missed in the past, and patients are getting better care.

Murphy says that for some, online access to doctors will mean fewer visits, for others, it’ll mean more. It depends on the patient.

And the government’s intent in requiring doctors to offer online access, Murphy says, isn’t to drive the overall number of office visits up or down, but to improve the relationship between doctors and patients by improving communication.

“We have all sorts of individuals right now who actually think their health conditions are the doctor’s problems and not theirs,” Murphy says. “And I think that’s what we’re really trying to focus on, helping the patient see that when they get engaged in their care, and when they become part of the therapy plan, that they can actually have better outcomes.”

There’s no definitive research linking more online access to doctors to better patient outcomes. But many doctors are optimistic.

“It’s a new form of medical care that offers the promise to be able to improve care,” says Dr. Jeff Cain, president of the American Academy of Family Physicians.

Cain says doctors and patients are both still learning what they can accomplish online together, and whether that means more or fewer office visits. The answer is important both for planning future health system capacity, and because most doctors still get paid based on the number of office visits, not for answering emails.

“This is something that our current health care system doesn’t pay for, so it’s coming out of my spare time,” Cain says.

An estimated 70 million Americans now have some degree of online access to their doctors, a number that’s expected to grow rapidly in the next few years. Whether that means more overtime for doctors, or better health care, or both, is a topic for future studies.