Last year, Don Sommers was diagnosed with peripheral artery disease, a painful condition that restricts blood flow to the limbs — in his case, causing a blockage in his left leg that persisted despite several surgeries. His doctors told him his options were up. 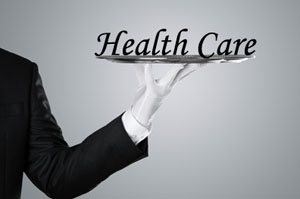 “I was emotionally and physically really distraught,” said Sommers, 66, a retired chemical engineer. “I was getting to the point where I thought I really would lose my leg.”

On the advice of his son, who works in Silicon Valley, he turned to Grand Rounds, a San Francisco-based healthcare referral network.

The web-based based service hooks patients up with someone on its roster of 30,000 specialists nationwide vetted by the company. A subset of about 1,000 doctors provides second opinions online within 72 hours.

In October, Grand Rounds referred Sommers to a specialist near his home in Phoenix who removed his clot — and saved his leg.

Throughout the process, Sommers had a health coach who collected his medical records, sent them to the specialist, made sure the new doctor took his insurance and continually checked in with him.

Grand Rounds is one of many healthcare startups bringing on-demand, concierge-like services once reserved for the ultra-rich to the middle class – similar to what tech outfits like Google, Amazon, Uber, and Lyft have done for personal shopping and transportation.

These budding companies offer basic access to medical advice, appointments and other assistance. Some operate regionally, others nationally. Their services and prices vary substantially—but all aim to fill gaps in the existing health care system, in part by using the Internet.

Often they charge monthly or annual subscriptions – say $50 a month or $149 a year for primary care services — although physical exams, surgeries, and second opinions from specialists can cost more. At Grand Rounds, an online second opinion runs $7500 and an appointment with a specialist is $200. (Sommers only paid $30 because he was covered through his son’s employee benefit package, which includes access to Grand Rounds.)

The concierge startups profit by selling their services directly to consumers or to employers. Some of the firms accept insurance or payment through health savings accounts.

“The market for these vendors is huge,” said Lynne Collins, vice president of human resources at the file sharing service Hightail, based in Campbell, California, which offers Grand Rounds and Bay Area-based One Medical as benefits. For her company, adding these was a “no brainer.”

With the benefit of technology, the concierge firms say they offer a more tailored, streamlined healthcare experience than consumers can get otherwise.

They also contend they provide better quality. Grand Rounds, for instance, chooses its doctors from a list of 520,000 physicians based on an algorithm,  plugging in variables such as research and publication history, patient outcomes and how other doctors rate them.

It’s all part of a shift toward personalized consumer-centered healthcare —a trend facilitated by the Internet and growing digital access to medical information. Obamacare has helped by spurring the creation of online marketplaces for health-care consumers and accelerating reliance on electronic medical records and data.

Before electronic medical records became more common, patients had to lug their files from one physician to the next, or have their doctors ship them by snail mail . Now some patients can access their medical records and reach their doctors quickly on smartphones and tablets. Doctors, nurses, health coaches, patients, and their families are increasingly becoming dispersed health care teams, thanks partly to readily shared patient information from remote monitors and personal data trackers.

“What we’re seeing is a real demand from patients themselves to control data, to control access to information, access to doctors…and to be active participants in their healthcare,” said Euan Thomson, a partner at venture capital firm Khosla Ventures. “It’s forcing the medical profession to reflect consumers’ needs in a way we’ve never seen before.”

Medical care is becoming more like other sectors of the economy, in which consumers can get what they want with a few finger taps — ride shares, sublets and pet sitters . Even more complex services, such as college courses , can be delivered online.

“Everybody likes to talk about Uber, but there are tons of places where tech and service—high-end services—have met. Now healthcare is finally starting to get there,” said Geoff Clapp, CEO of Better, a recently launched concierge health care company based in Palo Alto. “All of a sudden, [the market] is starting to look a lot more like automotive. Insurance is great, but shouldn’t we expect more? Where is our analogous roadside assistance, our trusted partner?”

Concierge services can offer a type of “safety valve” that keeps both employers and employees happy, said Bob Kocher, a former special assistant to President Barack Obama for healthcare on the National Economic Council and a partner at venture capital firm Venrock, which invested in Grand Rounds.

For doctors and hospitals, the companies can offer additional revenue and the chance to more productively use physicians’ time and expertise.

With web-based companies to broker online consultations with patients, doctors can keep their traditional brick-and-mortar practices and build “e-practices” in their spare time.

For years, some doctors have provided expert advice across state lines unofficially and free of charge, says Grand Rounds CEO Owen Tripp. In Grand Rounds’ network, doctors now get paid when they provide a second opinion, as well as when they physically examine a patient. Insurance kicks in if patients need surgery or specialized care. The company helps resolve any state licensing issues, provides additional malpractice insurance for doctors and takes responsibility for securing patient information.

For consumers, the services aim to fill holes in the health-care system, particularly in primary care services, providing a more seamless experience. The risk, however, is that by adding yet another source of care, with yet another set of records, they will do the opposite, said The Commonwealth Fund’s Dr. David Blumenthal.

“Even though the purpose…is to give you insights into how to coordinate your care, there is the possibility that they will further fragment it,” he said. “

Concierge services often take very different approaches. New York-based Oscar combines boutique amenities such as free unlimited calls with doctors and easy price comparisons – but it also acts as an insurer. Firms such as One Medical and Doctor on Demand concentrate on primary care.

Besides providing vetted referrals to specialists, Grand Rounds hires its own doctors in several states to oversee each patient’s case and to answer questions around the clock.

The company uploads patients’ medical histories into its Virtual Clinic, a cloud-based portal that makes a patient’s written or electronic records, images and lab tests accessible from anywhere. Patients can choose to share their data with friends and family.

The new company Better pairs clients with a personal health coach and gives them 24-7 access to an army of Mayo Clinic nurses who can counsel them and their loved ones on their healthcare needs. The cost: $50 a month.

The company promises to untangle the intricacies of the health care system, helping patients get their medical records, fill prescriptions, figure out which doctors accept their insurance plans and what procedures are covered. It also will fight on their behalf when problems arise.

When a new client signs up for Better, a personal health assistant spends some time on the phone getting to know him or her.

“We want to get to know what’s going on in your life” – for instance, like if the client is tech-savvy, switching jobs, relocating to another city, or has a relative who’s sick, said Clare Wylie, one of Better’s personal health assistants. “All of that really helps us predict the services that we can provide in the future.”

In the few weeks since the service launched, Wylie and her colleagues have helped one client get coverage for expensive Lasik surgery, aided another in figuring out what procedures are covered by insurance and, in the case of a third client, tracked whether medication was actually working. The patients need not be digitally inclined — the company will help them draw pen and paper charts.

“We change our system,” Wylie said, “to make it fit within you.”

Need A Doc? These Companies Will Hook You Up In A Hurry