Even with Stage IV lung cancer, there are moments when 32-year-old Chip Kennett feels blessed. Over the course of two weeks in April, those moments were many, as 325 friends and family members contributed $56,800 over the Internet to help defray his out-of-pocket medical costs. 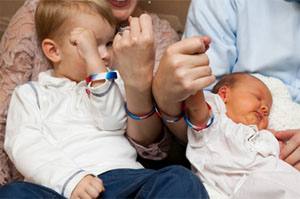 The Kennett family shows the “Team Kennett” wristbands a family friend made for them and their friends to show support for the family (Photo by Alison Hathaway of Red Shoes Photography/For KHN).

Kennett’s wife, Sheila, says she was overwhelmed by the generosity. We “kept saying how lucky we were!” she wrote in her blog Team Kennett. “Now just how messed up is that?”

The Kennett family of Alexandria is one of thousands turning to the Internet to raise money for medical bills. The sites that host these campaigns operate much like online business fundraising sites such as Kickstarter. It takes only a few keystrokes for a family to set up a Web page, where they tell their story and state a fundraising goal; later, they can spread the word on social media sites such as Facebook. Donations can be made with credit cards or via PayPal.

The contributions, which can be given by name or anonymously, typically range from the very small (as little as $5) to the extremely generous ($1,000 and up). In the Kennetts’ case, donations ranged from $10 to $2,000. Most sites are for-profit and charge a fee, between 3 and 12 percent of the money donated, to cover the processing costs and the expenses of running the Web site. GiveForward, the site the Kennetts used, charges 7 percent.

The Kennetts acknowledge they are lucky to have good health insurance. (Sheila has a federal employee policy through her job at the Senate.) Even so, the Kennetts have paid thousands of dollars in out-of-pocket expenses, including the insurance plan’s co-pay requirements and its $5,000 annual deductible ($7,000 for out-of-network doctors) for both 2012 and 2013. They also face large bills for their share of medication costs, including $485 a month for a blood-thinning injection that Chip, who works for a defense firm, needs daily and $480 a month for a bone-strengthening injection.

There are also the travel expenses for Chip’s overnight trips to Philadelphia, often weekly, where he is enrolled in a clinical trial. Since Sheila accompanies him, there’s the extra cost of child care for their children, Joe, 3, and Crosby, who was born six months ago.

The Internet fundraiser has helped alleviate some of those concerns. But perhaps more significant, it has boosted the family’s morale.

“I could be having a bad day and be really down,” says, Chip, who was caught off guard by his diagnosis since he had not been a smoker. “I’d go check the Web site. It was inspiring to check the dollar figure and the notes from friends. I’d find new notes from friends I hadn’t talked to forever. It provided emotional comfort that was extremely uplifting.” 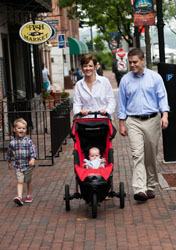 Other sites have sprung up over the past five years, including GoFundMe.com, YouCaring.com, FundRazr.com and Indiegogo.com. Unlike GiveForward, these sites also raise money to help pay for tuition, travel, disaster relief, pet medical care and funeral costs.

Some medical institutions and associations are joining in. The nonprofit Rare Genomics Institute, for example, was created two years ago to help families raise money to sequence genes of patients with rare genetic diseases, a process that generally costs about $10,000 and is rarely covered by insurance.

When it launched, GiveForward also raised money for other causes — “scholarships, art projects, whatever,” says co-founder Ethan Austin. But the “hugbacks” — calls or messages from users — from medical fundraisers were so appreciative, “we decided, ‘Why do anything else?'”

Austin says he is not surprised at the rapid growth of crowd-funding for medical costs, citing a 2011 National Bureau of Economic Research study that found that half of American adults say they would not be able to come up with $2,000 in the event of a medical emergency. This, taken along with another recent study showing that the average cancer patient incurs as much as $8,500 a year in expenses not covered by insurance, further explains why so many ailing Americans are seeking outside help to pay their expenses, according to Austin.

Far easier than a bake sale

Crowd-funding for medical costs, supporters say, is fast and efficient, far easier than holding a bake sale or silent auction. Still, it may not be a solution for every patient.

“People think the money magically flows in, but it doesn’t happen like that,” says Jimmy Lin, president of the Rare GenomicsInstitute. The institute has raised more than $300,000 for 30 projects, with four more campaigns in progress. “There is a lot of work involved. Putting up a page is just the beginning. Families need photos and personalized stories to help people connect, they need to think about how to leverage the people they know to raise funds, and they need to use social media to stimulate support.”

“It’s not intuitive,” Austin says. “You can’t just send out a mass e-mail and be done with it.” To be successful, there’s a sophisticated strategy, he explains, including asking close friends and relatives to contribute first. They are more likely to make a larger donation, say $50 to $100, prompting others who follow to make similarly sized contributions.

“It’s the law of ‘monkey see, monkey do,'” Austin says. Persistence is also required. “If you stop asking, you won’t keep getting donations.”

Fundraisers looking for a quick influx of funds may also be surprised. Although some Web sites pass on the money, minus the fees, as soon as a donation is made, several hold on to all donations until the fundraiser is over. (An end date is usually set when the campaign is launched.) In some instances, no money is turned over if the goal stated at the outset is not met. In that case, contributions are credited back to the donors.

There are also privacy issues. An Illinois freelance writer says she became concerned after friends created a fundraiser to help cover the costs of her chronic illness. Prospective employers, she worried, might stumble on the site while searching for her name on the Internet. She believes this is the reason she didn’t get a job she applied for.

“I don’t mind if they know I’m sick, but I don’t want them to think I’m so sick they can’t hire me,” says the writer, who declined to be named for this article. “I found the whole process humiliating and would have preferred for people to donate privately, through checks.”

For people on Medicaid or other programs that serve only people who are low on assets and income, there may be financial consequences. Donated funds could affect a person’s eligibility for assistance, so it would be wise to check with the appropriate officials before raising money. For donors, too, there are also drawbacks to donating via crowd-funding sites. For one thing, most such contributions are not tax-deductible since virtually all the campaigns are being staged by people, not nonprofit organizations.

Perhaps more important, there’s the issue of accountability on the use of funds since donors have no control over how the money is spent, notes Tony Dale, founder of the Karis Group, an Austin firm that is partnering with GiveForward and provides patient advocacy and bill-mediation service to help resolve medical billing issues.

“I would hate to think people are giving up their hard-earned money to help a friend, family member or even a stranger and then discover that the patient hadn’t done the necessary homework to make sure he or she was paying a fair price” for medical services, Dale says. And that often takes a lot of work, given the increasing complexities of medical bills.

Additionally, because crowd-funding Web sites do not verify the legitimacy of every fundraiser, there is ample room for fraud. Crowd-funding executives say that’s rare, adding that their sites are similar to eBay and Craigslist, which rely on users to police the sites and report suspicious activity. That’s why most sites caution donors to give only to people they know, or to friends of friends. Even then, donors can’t be assured that the money will be used as described by the fundraisers.

The Kennetts are well aware of that concern, as Sheila joked in her blog: “We wonder if anyone would notice if Chip was suddenly driving a new car. . . . But we clearly jest. . . . Please, please know we respect your generosity so very much that we promise to use the funds exactly as intended and will do our best to make it stretch as far and long as possible.” The Kennetts say they were buoyed by all the support they received during the fundraiser – from grade-school friends, parents and teachers from their son’s day care center, people they worked with 10 years ago (as well as more current ones), even the nurse in the maternity ward where their daughter was born.

“Not only was it therapeutic to rid our minds of this financial stress we were starting to come under, but it also was just downright fun watching names pop up,” Sheila wrote in her blog. “It was a trip down memory lane for us both. Some gave a little and some gave a lot, but the dollar amount didn’t matter. What mattered was that the reach was just so far and wide, you were most likely also saying a prayer, sending positive energy, feeling good vibes or at least thinking of us. Wow. That is so incredibly humbling and invigorating.”

Updated at 10:40 p.m. to clarify that the Karis Group is partnering with GiveForward.

Turning To The Web To Help Pay Medical Bills