The things that Amy Vance does for James Prasad are pretty simple: She helps him call doctors, organizes his meds, and helps him keep tabs on his blood pressure, blood sugar and weight. These simple things — and the relationships between a health coaches such as Vance and chronically ill Medicaid patients such as Prasad — are a big part of a $2 billion health care experiment in Oregon. 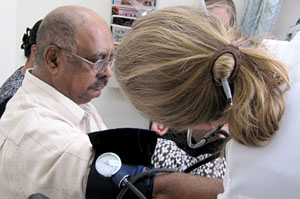 James Prasad gets his blood pressure checked at his doctor’s office in Oregon (Photo by Kristian Foden-Vencil/Oregon Public Broadcasting).

Gov. John Kitzhaber, a Democrat and a former emergency room doctor, has convinced the federal government that he has a way to make Medicaid treatment better, and cheaper, by completely changing the way the sickest people in Oregon get health care.

Here’s how it will work: Each city, including Portland, Salem and Eugene, will have its own umbrella group for caring for the Medicaid population, a so-called “coordinated care organization.” Under these umbrellas will be most of the big hitters in the health sector: hospitals, doctors, mental health providers and dentists.

Kitzhaber’s vision is that all those health care businesses will stop competing for patients and will be linked electronically so that health care providers can share information. Patients then can go wherever they need to get the best care. The sickest people, such as Prasad, A 69-year-old cardiac patient, will have $20-an-hour outreach workers to help them navigate the system and avoid costly hospitalizations. These outreach workers, such as Vance, will manage a caseload of about 30 patients – with the goal of saving the system hundreds of thousands of dollars.

“I think this is really a defining moment for health care in the State of Oregon and, I think that if we’re successful, probably for health care beyond our borders,” Kitzhaber said, as he was announcing the plan that enjoys popular support from both Republicans and Democrats.

Indeed, the state’s leaders are putting their political reputations on the line for this deal. The legislature passed its entire budget in the blind faith that the feds were going to come up with the money.

Unions and businesses in the state also back the program. Malia Wasson, the president of US Bank in Oregon, celebrated the news. “Governor, I know that you’re not prone to being overly demonstrative,” she said, at the announcement that the federal government was backing the state’s experiment. “But would you indulge me with a high five?”

There are skeptics, though. Republican State Rep. Jim Weidner was one of a few politicians to vote against it. “It doesn’t really drive down the cost of health care. It’s just shifting costs into different spots,” Weidner said. He expects the experiment to end up costing the state money.

But Kitzhaber disagrees. The coordinated care organization will be paid with a lump sum to manage a population of Medicaid patients.

Under the current system, hospitals and doctors don’t have a financial incentive to make people better. Quite the opposite, if a patient keeps coming back, they keep getting paid. But under the new system, the quicker a patient gets better, the more money the coordinated care organization can keep. Kitzhaber believes that over the next five years, Oregon will be able to save the federal Medicaid program every penny of the $2 billion the state’s been promised.

“We estimated that if every state Medicaid program in the country were to adopt this model, the net savings would be about $1.5 trillion dollars over 10 years,” he said.

To put that into perspective, Congress is looking at $1.2 trillion in cuts over the next decade after the super committee failed to come up with a budget.

Meanwhile, Oregon is pretty pleased with itself.  But the feds have said that if the state doesn’t show cuts to Medicaid spending by 2 percent next year, all this new money could dry up.

This story is part of a reporting partnership between Oregon Public Broadcasting, NPR and Kaiser Health News.