Terri Schmidt, an emergency room doctor at Oregon Health and Science University, can’t forget the day an elderly man with congestive heart failure came into the hospital from a nursing home. 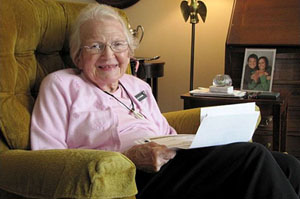 The man hadn’t filled in a medical directive form, so, by law, Schmidt had to provide all the medical care possible.

“I intubated the man. I did very aggressive things. It didn’t feel right at the time,” says Schmidt. “There was just this sense in my mind that this is a 92-year-old very elderly person with bad heart failure. And about 15 minutes later, when I was able to get ahold of the family.  They said, ‘You did what?  We talked about this! He didn’t want it. We had a big conversation in his room about a week ago.'”

Oregon has been in the forefront of trying to make sure a person has as much control over the end of his or her life as possible. The state pioneered a form known as a POLST, for Physician Orders for Life-Sustaining Treatment, that has been adopted by 14 states and is being considered in 20 more. The form offers many more detailed options than a simple “do not resuscitate” directive.

That’s good for Helen Hobbs, who is 93 and lives in an assisted living facility in Lake Oswego. Age has bent Hobbs low and she uses a walker, but she is very clear-headed on this topic.

“You know, death is part of your life. You know you’re going to get there someday so let’s make it as pleasant as possible,” Hobbs said. “I mean, would you like to stay in an unconscious condition for years while people kept you alive with feeding and hydration tubes? No.”

Hobbs outlined her end-of-life medical decisions a couple of years ago, after a serious surgery. She used Oregon’s form. It is signed by her doctor, so it’s legally enforceable.

Reading it, Hobbs says she likes the fact that it offers a lot of different options.

“Yeah, I did want antibiotics in case of infection. I don’t want CPR if I’m in cardiac arrest. I don’t want to be tied down with tubes,” Hobbs says. “You know there’s no point in prolonging it. I mean, death can be natural and it’s not that bad.”

Administrators at her senior residence advised Hobbs to keep her POLST form in a plastic tube in her freezer, so EMTs will know where to find it. Other nursing homes tell residents to keep their forms under the sink or on the fridge. It’s not exactly a perfect system.

Consider the case of Wanda Pucket from Eastern Oregon. Despite being 85 and close to death, she was airlifted to the hospital; given extensive surgery; and kept alive in the intensive care unit for days. Pucket had a form outlining her wishes not to be resuscitated, but nobody knew where it was. Her family couldn’t be reached before the extraordinary measures were taken.

“She would be so upset if she knew that kind of money was spent on her,” Hanni says. “Yes, we want to be humane and yes, we want people to treat us with respect. But is respect that kind of aggressive care?”

To avoid situations like Pucket’s, the Oregon legislature set up a database several years ago to deal with the problem of inaccessible POLST forms.

Now EMTs and doctors can access the state database to see if someone wants to be resuscitated.

That database is beginning to generate some interesting facts about the medical interventions people want as they die, according to Dr. Susan Tolle of the Oregon Center for Ethics in Health Care.

“We have really learned that this is not a black and white process,” Tolle says. “Less than 10 percent of people wanted to refuse all treatment. A majority want some things and not other things.”

Tolle avoids the topic of whether these detailed end-of-life instructions save money; she is wary of starting another “death panels” debate. But the database has allowed the state to quantify the policy by some measures.

“What we found was that if people marked ‘comfort measures only’ and ‘do not resuscitate’ and did not want to go back to the hospital…there was a 67 percent reduction in life sustaining treatments, primarily hospitalization and emergency room visits,” says Tolle.

Still, you don’t have to look far to find people who don’t like the forms. Christian Brugger is a professor of moral theology at the Saint John Vianney Seminary in Denver.

Brugger says giving a family member, or friend, a durable power of attorney is a much better solution to this delicate issue.

But Helen Hobbs says she filled in her POLST form to make sure her son doesn’t have to make difficult decisions as her life ends. She was grateful her husband had made his decisions known before he died.

“When somebody’s unconscious and not going to get better, it’s kind of silly to put them on a feeding tube,” Hobbs says, recalling how she refused that option for her husband. She was at peace with the decision. “We had talked about it together many times and neither one of us wanted that kind of treatment.”