>> Amy Pritchett works as a machinist, running computerized mills in a medical device manufacturing plant. In this Q & A, Pritchett talks about what it was like to switch careers after 15 years as a nursing home worker. Don’t see the audio player? Click here to download.

WARSAW, Ind. – Tom Till eyes the morning’s email to see who’s angling to hire his students: A local employer, which had already hired 23 people in less than a year, says it needs three more to help make the artificial hips, knees and other devices manufactured here in the self-proclaimed “Orthopedic Capital of the World.” 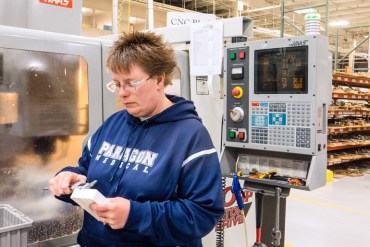 Amy Pritchett, 34, examines a sterilization case made in a computerized milling machine at her job at Paragon Medical just outside Warsaw, Indiana (Photo by Julie Appleby/KHN).

“Everyone is going gangbusters,” said Till, who oversees an advanced manufacturing program at Ivy Tech Community College in this lake-dotted region two hours north of Indianapolis.

Till’s bullish view of the medical device industry – he says he can’t crank out graduates fast enough — contrasts sharply with what industry lobbyists are telling lawmakers in the nation’s capital. They say a 2.3 percent tax on the sale of medical devices put in place two years ago by the Affordable Care Act has already cost more than 30,000 jobs and is stifling innovation.

The tax, projected to bring in $29 billion over 10 years, is the industry’s share of the cost of expanding health coverage to millions of Americans. Other industries expected to gain business from the health law, including hospitals, insurers and drug makers, are also paying a share of its costs, but none has been as vocal in opposition as the device makers, which have poured $30 million a year into lobbying Congress since 2010.

This month, with Republican leaders citing repeal of the tax as a top priority, the industry may finally achieve its aim. The effort also has the support of at least a handful of Democrats from districts with large concentrations of device makers, including Sens. Elizabeth Warren of Massachusetts and Al Franken and Amy Klobuchar of Minnesota.

(Whether GOP leaders would have enough Democratic support to muster a two-thirds override should President Barack Obama veto a repeal bill is unclear.)

“No one likes a tax, especially this tax, which goes onto a lot of innovative companies,” said Dan Mendelson, CEO of Avalere Health, a health care consulting firm. It “was not a tax that even the people who voted for the bill liked. It was put in to establish parity with other health industry payments.”

To hear the industry tell it, the last few years have been particularly tough ones marked by flat revenues and declining investment, especially in early-stage innovations.

The biggest challenge is “price pressure, mostly from hospitals” seeking to curb their own costs, said analyst Jeff Jonas, portfolio manager for Gabelli Funds in Rye, N.Y. “The effect of the tax has been a negative, but the device industry has been able to offset it,” primarily through layoffs and restructuring.

While a few large firms account for the lion’s share of annual sales – estimated between $106 billion and $116 billion a year — the companies range from startups to global giants like Johnson & Johnson and Medtronic.

Publicly traded firms reported flat revenues in 2013, the first year the device tax was in effect, according to EY, an advisory service that is part of Ernst & Young Global Limited.

As in other health care sectors, a slew of mergers has swept the industry – in Warsaw, Zimmer Holdings has made a $13.4 billion bid to buy cross-town rival Biomet – raising concerns about consolidations and layoffs. A few firms are also reportedly considering moves overseas both to capture fast-growing markets and take advantage of less demanding regulations and taxes. 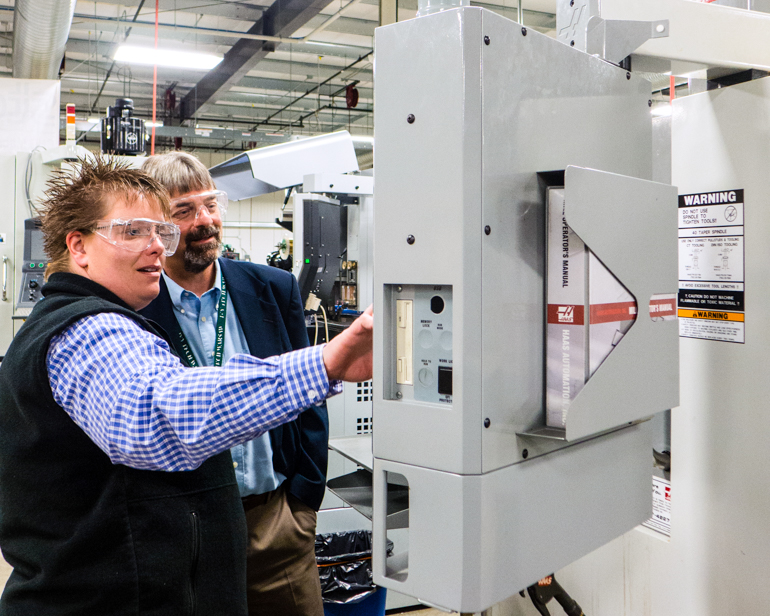 Amy Pritchett, a graduate, and Tom Till, director of the Orthopedic and Advanced Manufacturing Training Center at Ivy Tech Community College in Warsaw, Ind., program one of the school’s computerized milling machines (Photo by Julie Appleby/KHN).

Yet a visit to Warsaw, a town often viewed as a barometer of the device industry because one of every four jobs here is tied to it, suggests a stable, if not thriving, sector. Besides Zimmer Holdings and Biomet, Warsaw is also home to DePuy Synthes, part of Johnson & Johnson, along with about 14 other device companies and suppliers.

Students in Till’s program sometimes get job offers even before they finish their coursework.  And unemployment in surrounding Kosciusko County in November was 4.8 percent, lower than the national average of 5.8 percent.

To be sure, the area may be more insulated from job losses because its firms specialize in orthopedic devices, which have been more profitable in recent years than cardiac devices or spinal implants, say analysts.

Amy Pritchett, who went back to school to learn to operate specialized machinery after a back injury forced an end to her 15 years as a nursing home aide, revels in her new career as a machinist.

“The money is better. Life is better. And I’m nowhere near as stressed,” said the 34-year-old about her job at the vast Paragon Medical plant just outside Warsaw.

Pritchett got four job offers last January, right after she finished a 22-week training program at Ivy Tech.  “They literally all came in on the same day,” she said.

Who Will Really Pay The Tax?

Proponents of the device tax say the industry will simply pass the cost along to customers, or will make up for it through increased use of their products as more people gain health insurance.

Wells Fargo Securities analyst Larry Biegelsen projects that demand for medical devices will grow, along with the number of insured Americans.  “We believe this will be sufficient to offset the 2.3 percent med-tech tax,” Biegelsen wrote during the first year of the tax.

Wall Street has also been optimistic about the industry’s prospects, with companies’ share prices growing faster than the S&P 500 in the first half of 2014. Orthopedic companies saw a 39 percent increase in share prices, according to a report from Mercer Capital, a valuation firm based in Memphis.

While there have been some jobs lost as a result of the device tax, industry figures of tens of thousands are greeted skeptically by Wall Street, as well as by government analysts.

In November, the Congressional Research Service reported the device tax had “fairly minor effects,” with output and employment dropping by “no more than two-tenths of 1 percent.”

The industry’s lobbying arm, AdvaMed, fired back, saying the report is flawed because it assumes the cost of the tax would be passed along to customers. But that’s been difficult to do because hospitals are seeing their own reimbursements drop, and are pushing back against price increases.  Analyst McGorman said prices across the industry have fallen 1 to 3 percent annually.

AdvaMed said it surveyed members after the first full year of the tax and they cited a loss of “approximately 33,000 industry jobs,” with about 14,000 of those direct cuts and the rest a more speculative accounting of jobs that would likely have been created without the tax.

Still, a jobs’ tally isn’t the only way to measure the impact of a tax which comes right off the top of revenues and can be harder on smaller, newer companies.

“We have not as a result of this tax had to lay people off … but it has definitely had a chilling effect on our ability to grow head count,” said Mark Throdahl, president and CEO of OrthoPediatrics, an 82-employee company in Warsaw that specializes in child-sized devices used in orthopedic surgery.

The tax put on hold plans to proceed with developing a ligament repair tool for a specific type of knee surgery. The tax will cost the not-yet-profitable seven-year-old firm $500,000 this year, he said.

“If we were a big company, we would have a profit stream to tap into to pay a tax like this,” he said, “but we’re not there yet. The only way we can pay it is by reducing expenses.”

Repealing the tax may have political appeal, but it could prove challenging as other industries that pitched in to cover the cost of ACA demand similar relief.

“We feel there is a delicate balance: Is this where Congress ought to spend their first $28 billion, restoring the device tax?” asks Mary Ella Payne, a senior vice president for Ascension Health, one of the nation’s largest nonprofit hospital chains.

Scott Caldwell, CEO of The Resource Group, which helps Ascension buy devices and other products, said that even if the device makers can’t raise prices because groups like his push back, many of the larger firms can handle the tax.

“I looked at the net income for the top five firms that sell devices to Ascension – and it’s 17 times more than Ascension’s,” he said.

But for smaller firms, repeal could restore some research funding and help win back investors, who have been reluctant to put money into firms, knowing a portion would be used to pay the tax, rather than build the product.

“If this tax went away,” said Throdahl at OrthoPediatrics, “it would be transformational to our ability to develop products for kids.”