On the evening of March 1, 2008, Gary Diego was relaxing with his wife, Ellen, when she abruptly lost her hearing, began repeating herself, and seemed to be losing her grip. 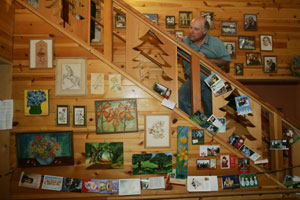 Gary Diego looks at some of his wife Ellen’s artwork in his home in Truckee, Calif. (Brad Horn/KHN)

Alarmed, Diego rushed her to his insurance company’s in-network hospital, near his home in Truckee, Calif. Unable to handle what was determined to be bleeding in the brain, the hospital quickly transferred her to Renown Regional Medical Center in Reno, Nev., where she spent 17 days in intensive care. While recovering, she caught pneumonia and died.

A few weeks later, a still-grieving Diego learned from his insurer, Health Net, that he owed the Reno hospital $75,462.77. The reason? The hospital was not in his approved network.

Diego’s story is an extreme example of what can happen in medical emergencies. Consumers who are careful to choose in-network doctors and hospitals for their routine medical care often cannot choose where or how they are treated in an emergency. In a practice known as balance billing, insurers pay a portion of the out-of-network charges, and the balance owed to hospitals and doctors is dumped on patients.

Until recently, the problems associated with out-of-network emergency care had received little attention. But now they’re being attacked on multiple fronts, with insurers, hospitals and doctors pointing fingers at each other, and patients stranded in the middle.

What Can A Medical Billing Advocate Do For You?

On Aug. 12, an insurance industry trade group released a report saying some out-of-network doctors and charge much more than the negotiated fee they would collect in a network.

The group, America’s Health Insurance Plans, noted that out-of-network fees are not regulated and asked Congress to investigate the issue. None of the leading reform bills addresses the issue now.

Doctors, on the other hand, complain that insurers pay them too little. Many have been critical of a January California Supreme Court decision that banned balance billing, meaning that physicians cannot charge patients on top of what the physicians have received from an insurance company.

In a victory that same month, the American Medical Association and others reached a $350 million settlement with UnitedHealth Group, the nation’s second largest insurer, over what the AMA charged were unfairly low out-of-network payments. That dovetailed with another agreement New York Attorney General Andrew Cuomo reached with UnitedHealth to help fund a new independent means of determining appropriate payment rates for out-of-network care.

Sen. Jay Rockefeller, D-W.Va., held hearings on the practice in March and April, during which he said inadequate payments by insurers constitute “outright fraud.” 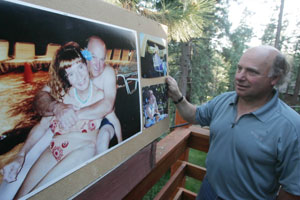 Gary Diego with a picture of his wife Ellen at his home in Truckee, Calif.

“All physicians want to do is get paid fairly,” said Dr. Ray Johnson, an emergency room physician in Mission Viejo, Calif., and a board member of the American College of Emergency Physicians. “We don’t want to balance-bill patients. The key is to come up with a fair payment number” that would be covered by insurance.

Insurance companies say the same thing-but the two sides have trouble deciding what a fair payment should be.

It’s impossible to determine in Diego’s wife’s case whether the hospital overcharged her-that is, balance-billed her-or whether the insurance company initially refused to cover a legitimate bill. That’s because the hospital is not in Diego’s network, and so the insurer and hospital have no agreement spelling out charges.

Even when emergency care is delivered in an in-network hospital, patients often receive bills from laboratories and doctors who worked on their case but are not in their networks-sometimes from radiologists or pathologists they have never met.

People like Diego, 54, a construction foreman for a small contracting firm, are trapped in the middle-and stuck with the bills. He expected to lose his home and be forced into bankruptcy. “I was devastated,” he said.

“Many states, ours included, would go to bat for that consumer,” said Sandy Praeger, the Kansas state insurance commissioner and a past president of the National Association of Insurance Commissioners. “If they’re transferred to a facility and it’s the closest facility, federal law can come into play.You can’t turn somebody away if it’s an emergency situation.”

While doctors and hospitals cannot refuse emergency care, the law is unclear about how that care should be paid for. American Medical Association trustee Dr. Robert Wah, an obstetrician-gynecologist in Washington, said physicians are in a vise: The federal law requires them to provide emergency care without considering a patient’s ability to pay.

“Providers of emergency services provide millions of dollars in uncompensated emergency care each year,” he said in testimony in February at a meeting of state legislators in Washington. In 2004, he said, doctors lost $4.2 billion in bad debts related to emergency care they were forced to give. 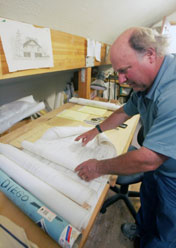 Gary Diego, a foreman for a contracting firm, looks over construction plans.

As Diego’s bills continued to arrive, he discovered that he also owed money to out-of-network doctors and testing laboratories for services not covered by insurance. “It’s amazing how many individual doctors and test labs are involved,” he said.

All of this was on top of a $14,000 deductible he had chosen to keep his premiums down.

Diego ignored the hospital bill for two months, until his insurance agent suggested he talk to Cindy J. Holtzman of Medical Refund Service Inc. in Marietta, Ga. Holtzman is an insurance agent and medical billing advocate who now spends most of her time working on behalf of consumers who, like Diego, face medical bills they can’t afford.

Holtzman wrote Diego’s insurance company a blistering appeal in Diego’s name. The hospital “had to drill holes in [Ellen’s] head, thus saving her life. If this is not a real emergency, I do not know what is,” she wrote. “I am begging for your help to re-review her claim, review her medical records, and reduce the portion I owe.”

Nearly four months after Holtzman took the case, just before Christmas, Diego’s insurance company agreed to pay an additional $52,000 to the hospital. And the hospital agreed to forego the remainder of the bill. Holtzman charged Diego $7,500-10 percent of what she saved.

He will now be able to keep his house, and bankruptcy no longer looms as an imminent threat. “I was just elated,” he said.

Don Butterfield, the director of communications for Renown Health, which operates the Reno hospital, said, “Usually, when an insurer recognizes a clinical gap in their network, they promptly authorize care at Renown, even if our providers are outside of their network.” When that does not happen, he said, the hospital will often make adjustments, as in Diego’s case.

Brad Kieffer, manager of public relations for Health Net of California, said that Health Net, too, often made adjustments to accommodate patients. “We take the member out of the middle of what is essentially a business dispute [between the insurer and the hospital] and we deal directly with the hospital on any remaining payment issues,” he said.

Asked why Diego had to exhaust all regular appeals and use extraordinary measures to make that happen, Kieffer said he could not comment on this particular case, because of privacy issues.

Many authorities agree that emergency-care coverage should be overhauled. Many, including insurers, also argue for more transparency in coverage and hospital practices.

“Some hospitals have not been as transparent as you would like,” said Dr. Richard Duszak, a radiologist in private practice in Memphis, Tenn., and an official with the American College of Radiology. “They tell you that they are an in-network provider, but they don’t tell you that the emergency room physicians are not in the network.”

Similarly, he said, insurance companies, which act as the middle man between patients and doctors, need to be very clear about the terms of their policies. “They have a responsibility to you and to me, letting everybody know what the rules are.”

“We agree there needs to be more transparency in this process,” said Robert Zirkelbach, a spokesman for AHIP. “People need to know how much providers are charging for out of network services, and policy makers should address the issue.”

Diego says he isn’t angry about what happened, despite his close brush with financial calamity.

“I wouldn’t mind paying more and just being able to go right to the doctor or the hospital without being worried about it being in network,” he said. But, he added, “I don’t see an easy fix.”