DELRAY BEACH, Fla. —  Waiting for Newt Gingrich to arrive at a Republican Jewish Coalition rally here late afternoon Friday, Connie Cestari, 80, said health care will be a top issue for her in November. 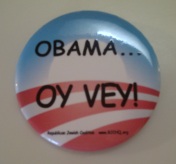 She said she’s voting Republican in part to make sure the 2010 health overhaul gets overturned, because it gives the government too big a role in health. “They are taking another freedom from you,” she said.

Cestari, of Boynton Beach, Fla., said she was not aware of benefits the law has already given her or other seniors — such as free preventive tests or the gradual closing of the doughnut hole gap for those with Medicare drug coverage.

Asked what she thought of the Republican plan to turn Medicare into a voucher program that would limit federal funding for the program, she said she wasn’t aware of it.

Cestari’s attitude toward the health overhaul reflects the findings of numerous polls about the law: Most people don’t know the law’s details, and many seniors think it will  hurt them.

In interviews with nearly a dozen Republican seniors attending the rally in this heavy Jewish retirement area known for golf courses, kosher delis and “early bird” specials, most like Cestari said health care is a key issue, but they acknowledged they knew little about how the law affects them — or about Republicans’ plans to curb Medicare spending.

Wearing buttons such as “Obama … Oy Vey” and “Don’t Believe the Liberal Media,” many of the 700 people at the event said they worried the health law would hurt the economic recovery,  affect their ability to get care and increase  health costs.

“I’m worried about my care being limited and the death panels,” said Anne Lane, 74 of Palm City, Fla. She said wasn’t too familiar with Republicans’ Medicare proposals, though she thinks it’s a good idea to let people on Medicare use health savings accounts to pay their bills.

Lynn Sherrer, 64, said she favors repealing the  law because it will “take $500 billion out of Medicare.” She was not aware that Republican proposals for Medicare leave those cuts in place, according to the Congressional Budget Office.

Sherrer said lower Medicare payments to hospitals and insurers will mean less care for patients. “It’s the most important issue,” she said of the health law.

Not everyone felt the same way.

Gary Tuner, 61, of Wellington, Fla. said health care ranks about 7th on his list of priorities, with the nation’s deficit his top concern. His main concern about the health law is to the individual mandate requiring nearly all Americans to purchase health insurance.

At the event, Gingrich’s only mention of the health law came in response to a question about helping young people pay back their college loans. The former House speaker took a jab at the one of the health law’s most popular provisions that allows people to stay on their parents’ health policy until age 26.

“That is Obama’s admission that he can’t get them a job until they are 26,” he said of the provision that has helped about 2.5 million people. “I would rather help them get a job,” Gingrich said.

Jules Lux, 82, of Lake Worth, Fla.  said the health care law will drive private insurers out of business and increase costs for everyone.  Asked if he’s benefited from the free preventive tests under the health law — which went into effect last year — Lux  said he hadn’t heard about it. ‘Nothing is really free. Someone is paying for it.”

Irene Ravinovitz, 67, of Delray Beach, Fla., was one of the few people who said something positive about the health law. She said her unemployed daughter was able to get insurance through new high-risk pools for people who have been uninsured at least six months and have a pre-existing condition. But she said she still opposes the law because  she thinks it will mean less time with her doctor. “My doctor doesn’t like it, so that concerns me,” she said.