Katie Schlenker softly touched her leg. “Are you still in a lot of pain?”

Henry, a petite mother of five who has been hospitalized since early September, closed her eyes and nodded. “It’s not like an ache,” she told her doctor. “It’s pain that just won’t go away.” 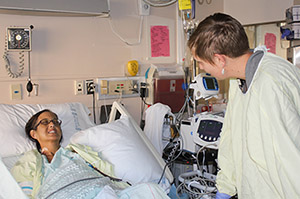 Palliative care doctor Katie Schlenker tries to help Leanne Henry with her pain, weeks after Henry underwent a liver transplant at the University of Washington Medical Center in Seattle (Photo by Anna Gorman/KHN).

Schlenker is a physician unlike most at the University of Washington Medical Center. A palliative care doctor, her role is to comfort her patients instead of cure them, to help them cope with their illnesses rather than to treat them.

When Henry was in intensive care, Schlenker stood beside her patient’s husband and children as the family prayed for recovery. They talked extensively about what the family wanted to do if Henry took a turn for the worse. After the transplant, Schlenker and her team helped with the pain and made a “success chart” to mark Henry’s daily progress. Last month, they decorated her hospital room for fall.

Hospitals around the country are increasingly starting palliative care programs, designed to relieve seriously ill patients’ pain, stress and symptoms regardless of how long they have to live. While some patients are close to death, others are still receiving treatment to extend their days. And as they do, the palliative care team, including doctors, social workers, nurses and chaplains, tries to improve their quality of life.

Palliative care teams help patients with issues not always addressed by medical doctors. They help manage symptoms such as nausea, difficulty sleeping and fatigue, and they coordinate with the doctors providing treatment. They also provide patients and families with emotional and spiritual support, helping them understand the illness and guiding them through tough treatment choices.

More than two-thirds of hospitals with more than 50 beds offer palliative care, up from 25 percent in 2000, according to the Center to Advance Palliative Care at Mount Sinai School of Medicine. Washington is a leader in the field; more than 80 percent of hospitals have such programs.  The field is recognized as a subspecialty, and there are fellowships, journals and research centers devoted to the topic.

The increase in popularity is in part due to the growing number of people with chronic illness who may not be ready for hospice. Medicare only pays for hospice benefits if patients have six months or less to live and agree to forgo treatment that prolongs life. “You shouldn’t be days or weeks from death to have your symptoms managed and pain taken care of,” said R. Sean Morrison, director of the National Palliative Care Research Center.

But some doctors are resistant to palliative care because they believe it pushes patients away from medical treatment that could help them fight their illnesses.

Even the idea of patients planning ahead and making decisions about their care has caused controversy. A provision that would have paid doctors for having discussions about living wills with their patients was taken out of the Affordable Care Act after conservatives raised concerns over “death panels.”  An Oregon congressman is trying to revive that discussion with a similar proposal.

Regardless of what happens with the legislation, experts said palliative care programs will continue to grow as baby boomers age and as hospitals look for ways to reduce costs and increase value under the nation’s new health care law. Studies show that palliative care reduces health care spending by avoiding unnecessary treatment and getting patients out of the hospital faster. Researchers have also concluded that the care improves patient satisfaction and lengthens life.

The way forward in medicine isn’t just blind application of technology to treat disease, said Tony Back, a University of Washington professor, an oncologist and an expert in the field. “Fear drives people to think there’s got to be a way to fix this,” he said. “There are better ways to deal with serious illness.”

On a rare sunny afternoon in Seattle, palliative care physician Melissa Bender stepped into the hospital room of Susanne Becklund, who was wearing a patterned red scarf around her head.  Becklund was diagnosed with leukemia in July and had only been out of the hospital for a few days since. She had undergone chemotherapy and bone marrow biopsies. Nothing had worked.

“All in all, it doesn’t sound promising,” Becklund said.

Becklund, 63, said she knew she might not make it until summer but that she didn’t have a big agenda. She just wanted to get out of the hospital and breathe in fresh air every day. She hoped to take a walk alongside a favorite river.

“What gives you strength during hard times?” Bender asked.

Becklund responded that she just puts “one foot in front of the other.” But since finding out that there was little the doctors could do to treat her cancer, that’s gotten a lot harder. “I’m trying to get stronger, but for what?” Becklund asked.

Bender let silence fill the room before speaking again. She promised to help Becklund live the rest of her life as she wanted. “Continuing everything you are on will keep you in and out of the hospital,” she said of Becklund’s medical treatment. “Stopping some of those things will help you get home.”

Patients sometimes refuse to see the palliative care team, worrying that doctors are giving up on them or sending them home to die. But the way Bender sees it, she is listening to what they want and trying to help them get the most out of life.

Henry wants to return to her home on Whidbey Island within a few weeks but knows that may not be realistic. Since entering the hospital for her liver problems, she has had complication after complication.

In early September, Henry was so sick that her organs were shutting down, and she was hooked to a ventilator. Doctors repeatedly told her husband that she wasn’t going to make it. Schlenker and social worker Carol Kummet asked what the family wanted to do.

“I told them that she is a mother of five and that she could struggle through this,” said her husband, Dan Henry. “We didn’t want to give up.”

Finally, on Sept. 24, she got a new liver. But the problems didn’t end there. She has suffered from infections and blood loss and needed several more surgeries. The recent pain sent her to the operating room again. As Henry moved throughout the facility — the operating room, the emergency room, the transplant floor— Schlenker and her team have been familiar faces.

Henry, wearing orange nail polish and a thin coat of lip gloss, said she feels like she can say anything to them.  Most of the time, Henry is motivated to get better, but sometimes she just wants to give up. Schlenker told her she was there to support her, no matter how she felt.

“You’ve had lots of ups and downs,” Schlenker said. “It’s okay to have a bad day and to be frustrated and be angry.”

Jack Brewer, a 61-year-old welder from Alaska, has had his ups and downs too. He was airlifted to Seattle after having a massive heart attack in October. Now, Brewer is connected to an artificial heart, a machine that beats in place of his own. “That is what is keeping him going till he gets a heart transplant,” said his daughter, Amy Snow.

Kummet, the social worker, looked at Snow and her brother, Austin Brewer, and smiled. “That is only one thing that is keeping him going,” she said.

Snow said she had to Google “palliative care” when the team visited. At first, she feared it meant he was even sicker than she thought. Soon, Snow realized they were there to help the family cope with their father’s illness and to help him be more comfortable. The team makes her dad feel more like a person than a patient, she said. 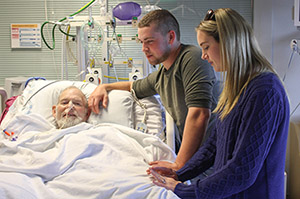 Jack Brewer, who had a heart attack in October, lies in a hospital bed at the University of Washington Medical Center in Seattle. His children, Amy Snow and Austin Brewer, stand by their father’s side. Snow said the palliative care team makes her father feel more like a person than a patient (Anna Gorman/KHN).

Whether patients are dying or living with a serious illness, doctors are notoriously bad about having difficult conversations and about listening to what patients want, said Stu Farber, who oversees the University of Washington’s palliative care program.

On a recent morning, he explained to a group of fourth-year medical students that they would soon be treating very sick patients and needing to talk to them about their prognoses. The talks won’t be easy, as patients express frustration, sadness and grief.  “We went into medicine to help people,” he said. “We don’t want to make people angry or to make people cry.”

Nick Vaudreuil, 25, said so much of medical school has focused only on the science so he appreciated learning how to talk to critically ill and dying patients.  “It humanizes the whole process,” he said.

“They have given us hope,” he said, “while everybody else was saying we didn’t have any.”

When Palliative Care Is The Best Care