Seattle mourned the news: Elizabeth and Robert Mar died of COVID-19 within a day of each other. They would have celebrated 50 years of marriage in August.

But their deaths at the end of March were not the same. Liz, a vivacious matriarch at 72, died after two weeks sedated on a ventilator. Her analytical engineer husband, Robert, 78, chose no aggressive measures. He was able to communicate with their adult children until nearly the end.

“You cannot underestimate the stress on family members who cannot visit and are now in a crisis mode trying to talk this through over the phone,” said Owens, a doctor of nursing practice who runs palliative and supportive care at the University of Washington Medical Center-Northwest in Seattle. 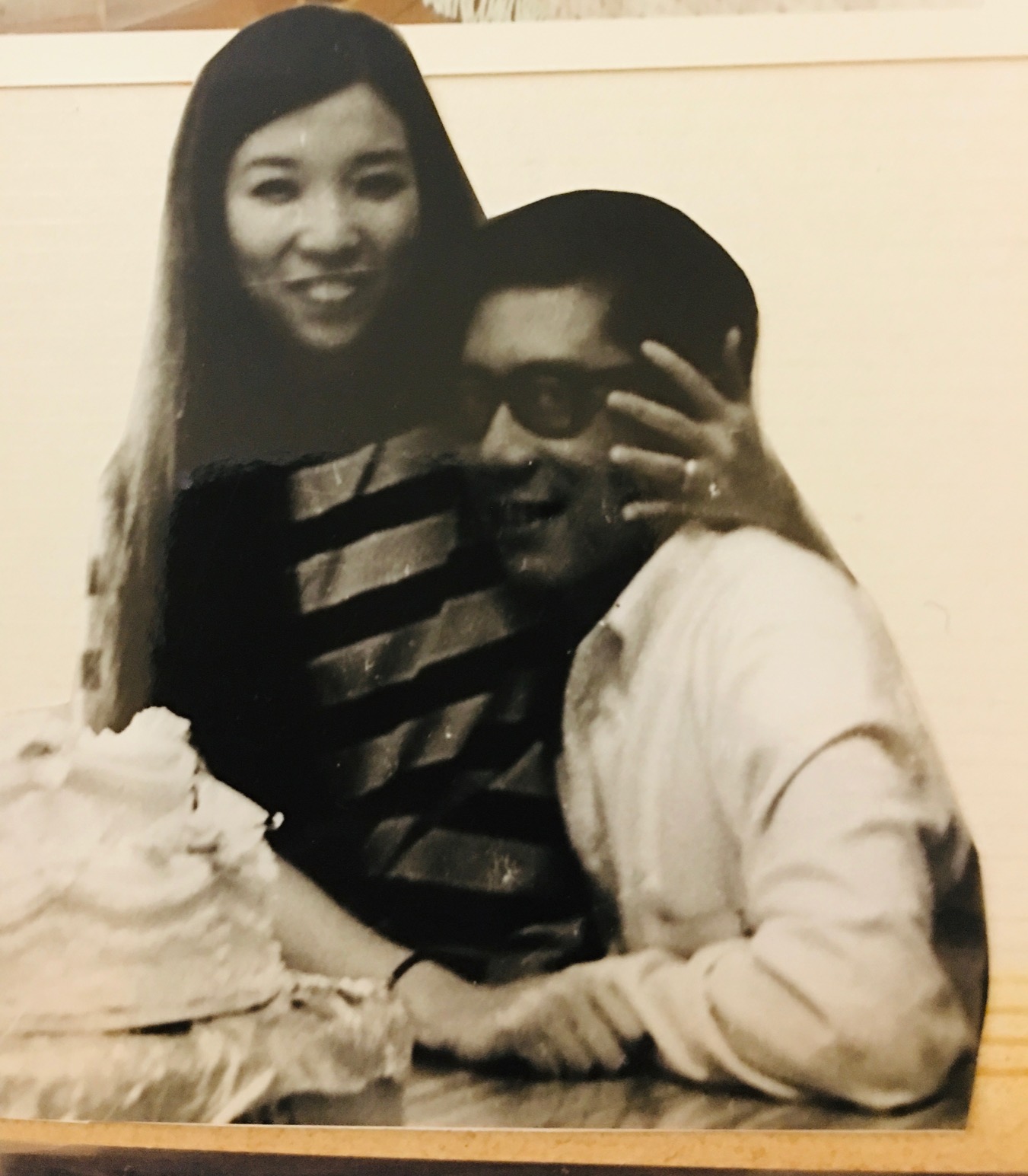 Elizabeth and Robert Mar on their first wedding anniversary in Portland, Oregon, on Aug. 22, 1971.(Courtesy of Angie Okumoto)

Owens, like other palliative care specialists in COVID-19 hot spots around the country, has seen his professional duties transformed by the deadly coronavirus. Patients and their families face abrupt decisions about the kind of care they want, and time for sensitive deliberation is scarce. Conversations once held in person are now over the phone, with all the nuances of nonverbal communication lost. The comfort of family at the bedside of the dying is all but gone.

This is the new reality for those who practice palliative medicine — a speciality focused on relieving pain and symptoms, improving quality of life, and providing support to patients and families during severe, chronic or fatal illness.

Doctors and nurses trained in this branch of medicine are in high demand as hospitals treat thousands of terribly ill patients who may end up on life support with only a small chance of survival.

Before the coronavirus, Owens rarely worked in the emergency room. Now he’s there regularly, called in whenever a suspected or confirmed coronavirus patient at high risk of complications comes through the doors.

“It is a totally different atmosphere in an emergency room,” Owens said. “The conversations are more abbreviated than they would be because you are behind a mask, you are in a loud room, completely gowned up.”

It’s a tough way to talk through sensitive and crucial questions about a patient’s chance of survival and what they want.

“This is completely unprecedented,” said Dr. Diane Meier, director of the Center to Advance Palliative Care and a professor at the Icahn School of Medicine at Mount Sinai.

During the surge of coronavirus patients in New York City, Meier said, her hospital system set up a palliative care hotline for family members of patients.

“You can’t see their facial expression, all the cues you normally get with face-to-face communication are very hard to pick up over the phone,” Meier said.

Nonetheless, she said, these conversations — especially with such a fast-moving and poorly understood virus — are an essential piece of the pandemic response.

“Palliative care specialists are a scarce resource, just like ventilators and ICU beds,” she said.

Dr. Hope Wechkin, medical director of EvergreenHealth Hospice and Palliative Care in Kirkland, Washington, said palliative medicine is fundamentally about “being with patients during times of profound uncertainty, and continuing to place comfort and enhanced quality of life front and center.”

“We now have this new player [coronavirus] — as we are evaluating a patient’s goals of care,” she said.

One Family, Two Kinds Of Death

While much of the country was still waking up to the pandemic, siblings Angie Okumoto, Rich Mar and Rob Mar were already navigating these wrenching decisions about their parents’ care.

In early March, their mother, Liz, contracted the coronavirus and was admitted to the hospital.

Lively and hardworking, Liz was co-owner of the family’s popular Hawaiian restaurant, Kona Kitchen, which she founded with her daughter and son-in-law.

“She was one of those people that quickly made friends and made an impression on everyone,” said her son Rich. “Young people would look to her as a grandmother figure.”

Known for her warmth, she enjoyed giving customers a hug or word of advice. Angie said that when she and her siblings were growing up, her parents made sure they had family dinners, and her mother brought that same feeling of togetherness to their restaurants.

“She cared for people and wanted to know what was going on in their lives,” she said.

Liz had been in good health before contracting the virus. When her oxygen levels fell, her son took her to the ER.

“It was the last time I got to hear a response from her,” Rob said. “That was the hardest part — not knowing it would be the last time.”

The hospital was still adjusting its operations to account for the wave of COVID-19 patients and wasn’t yet specifically screening patients with the coronavirus about their end-of-life wishes.

As she was admitted, the hospital staff asked about what kind of medical interventions she wanted, if necessary. “Do you want CPR? Do you want to be put on life support?”

Their mother was weak but still conscious. She said yes. Her children agreed.

“We just had no idea what this virus was going to do,” Angie said. “We were trying to give her the opportunity to fight it.”

But their mother’s health worsened, and soon she was on a ventilator in the intensive care unit.

“For 14 days on the ventilator, she was alone,” Angie said. Her brother Rob adds: “That’s the part that hurts the most, and what will haunt me forever.”

Near the end, the three children did get to visit their mother one last time.

“We were all gowned up and she was sedated,” Rich said. “We were trying to talk to her and let her hear our voices.”

Meanwhile, their father, Robert, had also become sick. He had been a civilian operations analyst for the Navy.

“He was on a Ph.D. track and quit his program to support his new son, me,” Rob remembered. “My dad was more of the analytical type, he could give you a practical solution for everything.”

In the early years of his marriage, Robert was supporting a household of seven, including their grandparents. His children describe him as cerebral, a perfect complement to his more extroverted wife.

“They really meshed well together — it worked for them,” Rich said.

Robert was admitted to the same hospital as his wife. He seemed stable the first few days. But then his oxygen levels decreased and he started to decline.

He had been clear about his end-of-life care wishes.

“From Day One, he said he did not want to be on life support,” Angie said.

Darrell Owens started managing Robert’s care. The family talked and texted with Owens. He’d give them regular updates and tell them what to expect.

“He had to deliver this awful, awful truth, but the way he did it was so compassionate,” Angie said. “He helped us arrange everything we needed for our dad.”

“I appreciated the honesty,” Rob said. “I found that the most reassuring and valuable thing.”

Because he had decided against aggressive treatment, their father was never moved to the ICU. He was able to have a few in-person visits with his three children. Since he wasn’t on a ventilator, they could have a conversation.

Rob said his father’s treatment at the end of his life was on his own terms: “That was very important to him.”

Owens managed Robert’s care to the very end, and ensured that Robert could read the last few text messages from his son.

“They were basically goodbyes,” Rich said.

Robert also shared memories with Owens about his wife and children.

“My dad opened up to him about our family,” Angie said. “Dr. Owens knew quite a bit about us.”

The Mars are deeply grateful to the nurses and doctors who cared for their parents. They understand that hospitals are restricting visitors to minimize the chance of infection and preserve limited supplies of masks and gowns.

Still, it doesn’t stop Angie from wondering what might have been different if she had said goodbye to her mother before she was intubated, or had the chance to sit next to her while on the ventilator.

“What if I got to be bedside to my mom earlier, when she wasn’t heavily sedated, holding her hand and just being present,” Angie said. “That we’ll never know.”

It’s a new way of experiencing death that families are coming to know as the coronavirus keeps them at a distance in these final moments.