When palliative care specialist Dr. Tim Ihrig crosses the threshold of the Avelleyras home, he steps over a doormat that says, “One nice person and one old grouch live here.”

It doesn’t take long to figure out who the nice person is.

Phyllis Avelleyra grew up on a farm in western Iowa and met her husband Augie in “the big city,” which is what she calls Fort Dodge, with a population of 25,000. The couple, married for 60 years, has five daughters, the oldest of whom is already a grandmother herself. 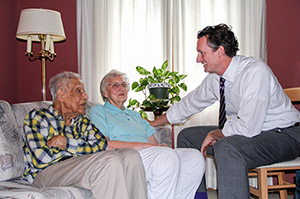 One morning in August, Phyllis, 85, and Augie, 93, sat together in their living room, along with three of their daughters and the man they think of as the newest member of their family. Everyone calls him Dr. Tim (Photo by Paula Avelleyra).

Ihrig met the Avelleyras family last year at UnityPoint hospital in Fort Dodge, where Phyllis was given a diagnosis of congestive heart failure, which is often fatal. As all of the other physicians at the hospital were running tests and drawing blood, Ihrig had another kind of inquiry: what did Phyllis want from the rest of her life?

“He asked my mom ‘what are the three most important’ things for her,” remembers Patty Aslesen, the Avelleyras’ oldest daughter. “She said, ‘My girls, playing cards on Wednesdays, and counting money for the church once a month.’ And Dr. Tim said, ‘Well, then our goal is to let you do those things as long as you can.'”

Palliative care focuses on improving the quality of life for patients with serious illnesses, and relieving symptoms, pain and stress. It’s not hospice; it can happen at any point during a patient’s illness, and often accompanies other kinds of treatment. But it’s a contrast to the usual rush to provide all of the advanced medical care possible.

“As an internal-medicine-grounded physician, I was steeped in the litany of ‘Here’s what we do to people because we can,’” says Ihrig. “With palliative care you sit and you help people understand where they’re at. This is their life. They’re the boss. We’re stealing from them if we don’t give them the opportunity to decide yes, no or maybe.”

UnityPoint added the specialty just last year, as part of a Medicare program to improve care and reduce costs. Ihrig says he never encourages a patient to skip any care, but when patients truly understand all of the options and the accompanying risks, they often choose less. And the result is not only a better quality and even length of life — it also saves money.

Patients in the palliative care program at UnityPoint cost the health care system 70 percent less than other patients at the hospital with similar diagnoses. Palliative care patients receive more care at home and more proactive management of chronic issues, which means they require fewer expensive hospital visits. It’s also the top rated program within the UnityPoint system for patient satisfaction and the program most likely to be referred to others.

With palliative care, says Ihrig, “the patient experience is heightened, and the nice bonus is by doing the right thing, you essentially save the system.”

It’s About Quality – Not Length – Of Life

At his first meeting with the Avelleyra family, daughter Patty remembers, Ihrig “explained to all of us that were there exactly what was going on with mom’s heart muscle, and by explaining that to us it helped us to understand that a lot of medical intervention would really be pointless, because this is something that doesn’t really have a fix.” 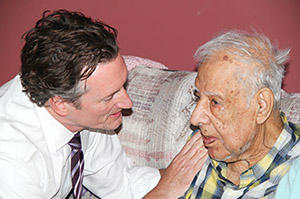 Patty says, surprisingly, that wasn’t such a hard thing to hear. “I was kind of relieved because my parents are older, and they don’t like being in the hospital. They don’t like having people come up to them and poke them and prod them and say that ‘We’re gonna do this and that’ and not understand what’s going on at all. So to realize that this is just a part of their normal progression of life,” she explains.
A few months ago, Phyllis’ kidney disease started to get worse, and the idea of dialysis came up. To talk about the pros and cons, Ihrig gathered the family together again, along with a kidney specialist, to help Phyllis make her decision.
“I have seen some people who were on dialysis and they looked so sad,” Phyllis says. “And they aren’t able to do what they wanted to do in their life. Their quality of life was absolutely not at all what they would want.” In the end, Phyllis decided to forgo dialysis.
While on palliative care, Phyllis has been able to stay in her own home. A nurse stops by to check on her and her husband Augie, who has dementia, every few weeks, and Ihrig makes the occasional house call.

“It’s just taking one day at a time,” says Ihrig. “It’s not just there’s some dementia or heart disease,” he adds. It’s about honoring Phyllis and Augie as a couple and asking, “How do we take it another day, another week or however longer we have? It’s an honor to be on this journey.

Ihrig says in the end, most of his patients like Augie and Phyllis aren’t afraid of dying—they know it’s part of life. But they are afraid of “gettin’ dead” – the often painful and drawn-out period at the very end. And that he can help with that progression.

A few weeks after we spoke in the Avellyras living room, Augie suffered a heart attack. He did not go back to the hospital, but was instead moved into a hospice home. Ihrig visited every Friday afternoon to share a beer and make sure he was comfortable.

At the end of October, with Phyllis by his side, Augie passed away.