SPARKS, Nev. — Paramedic Ryan Ramsdell pulled up to a single-story house not far from Reno’s towering hotels and casinos in a nondescript Ford Explorer.

No ambulance, no flashing lights. He wasn’t there to rush 68-year-old Earl Mayes to the emergency room. His job was to keep Mayes out of the ER.

Mayes, who has congestive heart failure and chronic lung disease, greeted Ramsdell and told him that his heart was fluttering more than usual. “I had an up-and-down night,” he said. 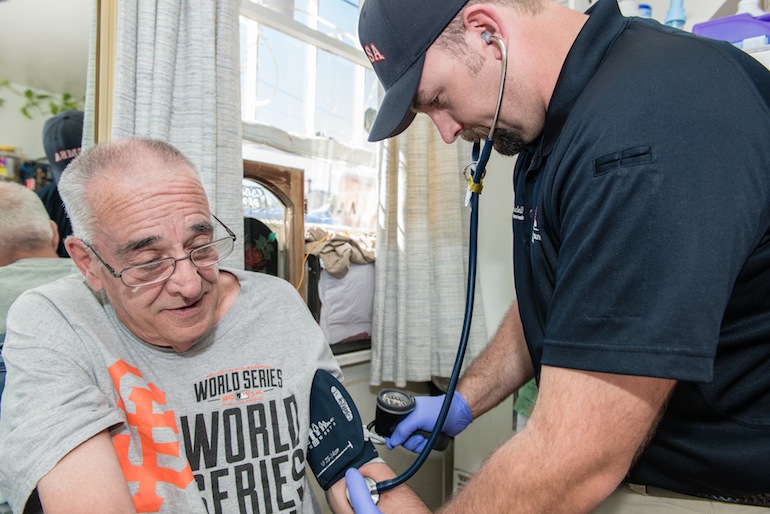 “Let’s take a look at it,” the paramedic responded, carrying a big red bag with medical supplies. “We’ll put you on the monitor.”

Since Mayes was released from the hospital a few weeks earlier, paramedics had visited him several times to monitor his heart and lungs and make sure he was following his doctor’s orders.

“With these guys coming by and checking me all the time, it makes it so much better,” Mayes said.  “When they leave, you know where you stand.” 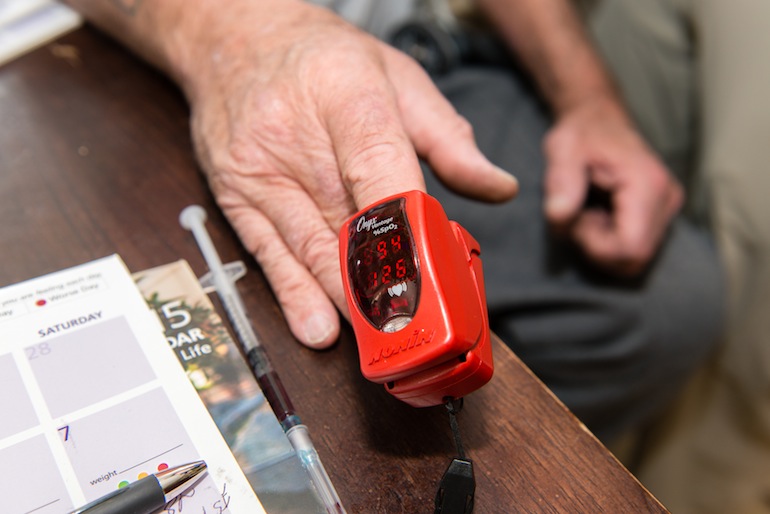 Earl Mayes, 68, gets his vitals checked by paramedic Ryan Ramsdell on Thursday, March 26, 2015. The community paramedics started visiting him after his hospital release, but Mayes didn’t think he needed their help. “I felt like I was bulletproof,” he said. (Photo by Heidi de Marco/KHN).

Not Always An Emergency

Ramsdell is part of an ambitious plan in Reno to overhaul the 911 system to improve patient care and cut costs. By using specially trained paramedics, health officials hope to help reduce avoidable trips to the emergency room and fill gaps in health care. They also hope to connect 911 callers — particularly repeat ER users — to the regular health care system.

Around the country, the role of paramedics is changing. In various states, they’re receiving extra training to provide more primary and preventive care and to take certain patients to urgent care or mental health clinics rather than more costly emergency rooms. Ramsdell and others in his program, for instance, spent 150 hours in the classroom and with clinicians  learning how to provide ongoing care for patients.

The changes are driven by the 2010 health law, which aimed to cut spending, expand patient access and improve quality of care. The federal government is funding the Nevada project and others in Arizona, Connecticut, Washington state and elsewhere. 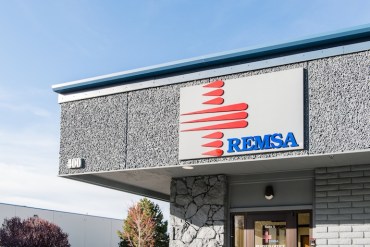 These projects face some challenges. The American Nurses Association and other professional organizations have raised concerns about whether paramedics are receiving enough extra instruction to provide direct care. Some programs need government waivers or legislation to exempt them from restrictions on what paramedics can legally do. In addition, insurers and the government only pay for ambulances and paramedics if people are transported to the hospital.

Perhaps the greatest obstacle, however, is changing the habits of those who call 911 even if they aren’t experiencing an emergency.

“It is really changing the public perception,” said Jim Gubbels, CEO of the Regional Emergency Medical Services Authority, which is spearheading Reno’s project. “We have a fire truck and an ambulance going to a toothache. We are trying to redirect those folks.”

Using a $9.8 million federal grant, Gubbels’ agency launched three different projects. In addition to providing paramedic home visits and offering patients options besides the ER, the agency started a nurse-run health line to give people with health questions another number to call in non-emergency situations.

An early evaluation by the University of Nevada, Reno, which was based on insurance claims and hospital data, shows that the projects saved $5.5 million in 2013 and 2014. They helped avoid 3,483 emergency department visits, 674 ambulance transports and 59 hospital re-admissions, according to the preliminary data. The federal government plans to do its own evaluation. 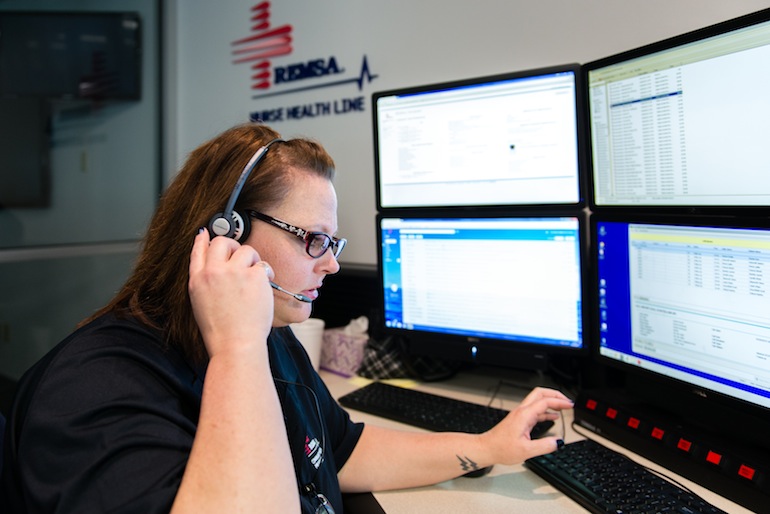 The nurse health line, located in the 911 medical communications center, features a non-emergency phone number broadly marketed to the public. To date, the program has fielded more than 16,000 calls. (Photo by Heidi de Marco/KHN).

One of the most successful ventures has been the nurse health line, said Trudy Larson, director of the university’s School of Community Health Sciences. About 2,000 calls a month have come from patients concerned about such problems as stomach pain, flu symptoms or falls.

At the call center on a recent afternoon, one man called with leg pain, wanting to know if he should go to the emergency room. A woman caller had lost her prescriptions and wanted to know where she could get new ones.

“There was a real need for a readily available, easy-to-access source of health information,” Larson said. “It was really clear that 911 was not the solution.”

Reno’s pilot projects have shown that paramedics and emergency medical technicians can help connect patients to the right level of care, said Kirk Gillis, a vice president at Renown Health, which runs hospitals and urgent care centers in Reno and Carson. Readmissions have dropped in part because of the care paramedics are providing to patients with congestive heart failure and chronic obstructive pulmonary disease, he said.

“When someone doesn’t need the expertise and expense of an ER, it’s important to have alternative care providers,” he said.

The 911 call came in midday on a Thursday. A man had fallen in a local casino and hit his head.

When the ambulance arrived, paramedic Jordan Carter quickly realized that the man was drunk. Carter and emergency medical technician Kristie Hilton did a brief assessment and helped load him onto a gurney. The man with a thick, grey beard and half-closed eyes slurred that he’d been drinking “whatever they served.”

Carter checked the man’s vital signs and determined that there weren’t any immediate medical problems or underlying health issues. “The man’s blood pressure and oxygen level were normal. He knew where he was.”

Carter asked if he wanted to go to a detox facility rather than the emergency room. He agreed. “They’ll give you a place to sober up safely,” Carter told the patient.

Outside the Reno Community Triage Center, Carter and Hilton helped him to his feet. He  tumbled through the door as Carter explained the situation to a nurse. “Stay out of trouble, okay?” Hilton said to him before hopping back in the ambulance.

Before the grant, Carter said the only option for intoxicated patients was the emergency room or jail. And if the patients didn’t need any medical care, they just took up beds that could have gone to people with true emergencies.

“It’s better to take him to a place that’s built to treat him,” Carter said. “And it keeps us out on the street.” 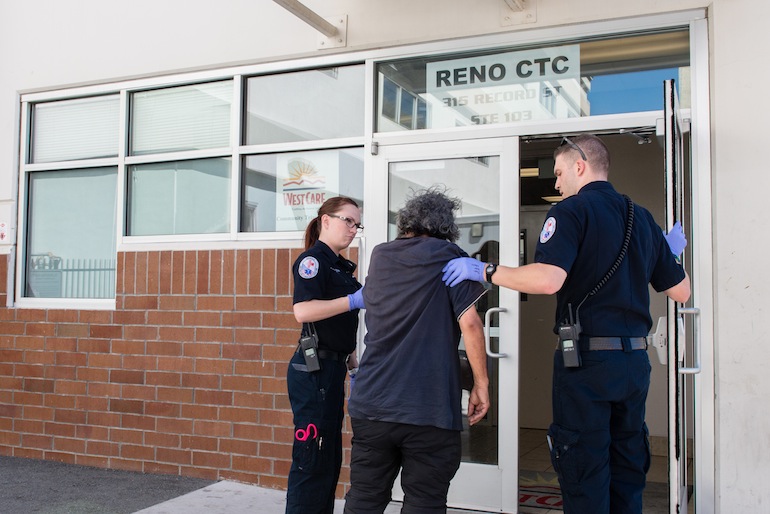 Carter and Hilton help an inebriated patient walk into the Reno Community Triage Center. Before the grant, Carter said the only option for intoxicated patients was the emergency room. (Photo by Heidi de Marco/KHN).

The paramedics and EMTs follow strict medical protocols on when to offer other choices to patients. For example, if their heart rate or blood pressure is too high, that requires a trip to the hospital. If patients are eligible for another option but want to go to the hospital, paramedics will follow their wishes.

Although the Reno agency has 16 partners who offer non-emergency care, including an orthopedic clinic, two primary care clinics and an urgent care center, the facilities may not have space or be open when patients need them. If the patients want to – or need to – go to an emergency room, Carter tries to help them avoid future calls.

On a recent day, he took back 56-year-old Tommie Jones, who had already been to the emergency room several times in two months. She’d called because her blood sugar was high and she’d left her insulin at home. On the way, Carter urged her to bring a small diabetes kit with her wherever she went.

Carter said the patients don’t always know how to manage their illnesses, so they wait until they are really sick and then end up in the hospital. “Then the cycle happens again,” he said.

Ramsdell is trying to break that cycle for Earl Mayes. Mayes lives alone with a talking cockatiel and a miniature pinscher named Chip. A magnet on the refrigerator reads, “How is your heart health level today?” A basket filled with prescription bottles sits on his kitchen table. 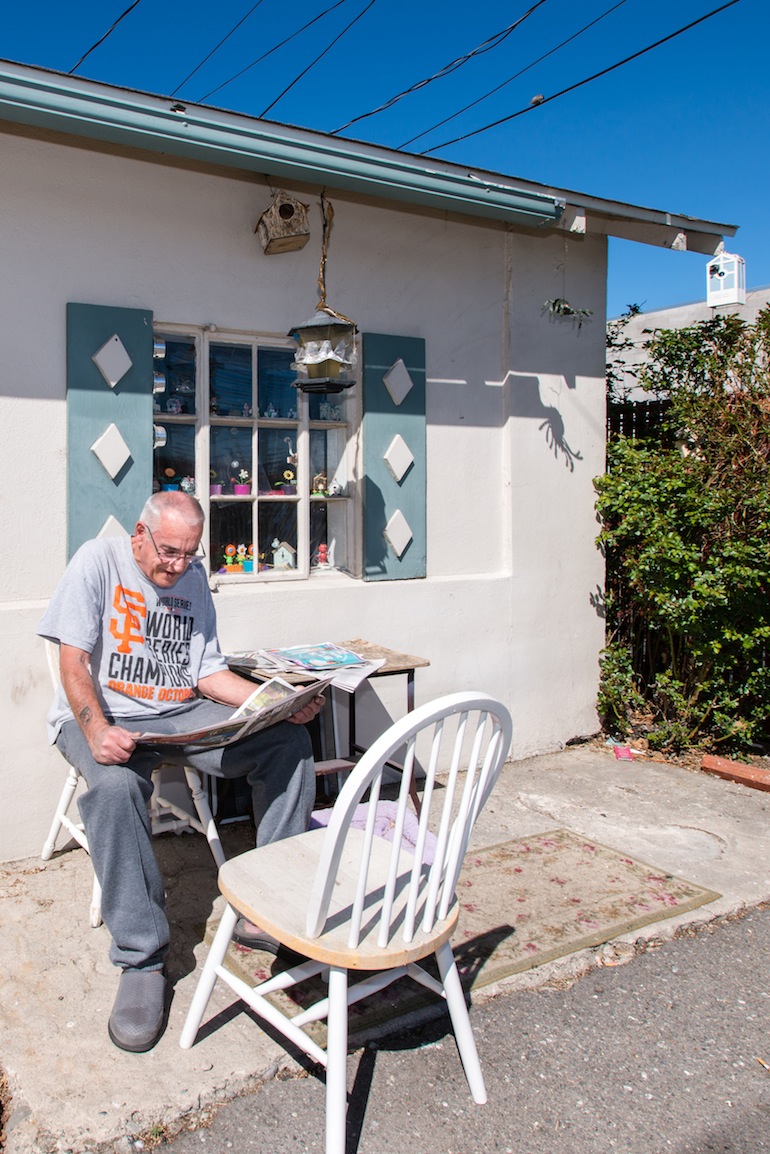 Mayes returns to reading his newspaper in front of his one-bedroom house after his check up. Mayes is scheduled to have another surgery in May. “I hope that works out good for me,” he said. (Photo by Heidi de Marco/KHN).

Mayes, a retired truck mechanic, had a pacemaker put in eight years ago. He was healthy until last year, when his lungs filled with fluid.

“I was breathing like a locomotive,” he said. “I never knew you could drown from the inside out.”

The paramedics started visiting Mayes after his release from the hospital last year. Mayes told them he didn’t need their help. That didn’t last. Mayes ended up back in a hospital bed.

After his latest release, Mayes said he followed all of the paramedics’ instructions. He took walks. He stopped eating salty foods. He wrote down his daily weight.

During their recent visit, Ramsdell checked Mayes’ vital signs and listened to his lungs. “No water – nice and clear all the way through,” Ramsdell said.

But when he did an electrocardiogram, Ramsdell discovered that Mayes’s heart rate was higher than normal. He told Mayes he would call the cardiologist.

Mayes said he likes being able to call paramedics on their business line day or night. “If I get in trouble, I just have to pick up the phone and I get a straight answer.”

As for Ramsdell and his coworkers, they’ve had to adjust to their new role. They were used to transporting patients to the hospital – not leaving them at home. “We had to change to a whole different mindset,” he said.

But Ramsdell said it was a shift he was glad to make. “People heal better and heal faster if we are able to treat them at home.”