Two days after Erik Friedman was born, his parents applied for coverage under Pennsylvania’s universal Children’s Health Insurance Program. Six months later, they got it. 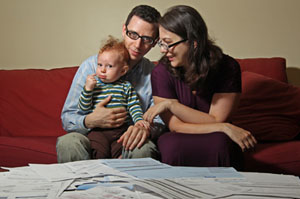 Ari Friedman left, and his wife, Tara Mendola, right and their one-year-old son, Erik Friedman, center, with some of the paperwork that documents their experience trying to get routine coverage for their newborn by the state Children’s Health Insurance Program. (Photo by Michael Bryant/Philadelphia Inquirer).

What happened in between were 86 phone calls, two lost applications, a calculation error that tripled their income (and raised their premium), incorrect advice that they should (and did) drop their baby’s catastrophic health insurance to qualify, multiple promises of responses that never came, and collection agency letters for hospital bills, which, of course, hadn’t been paid.

How often this happens is unclear. State officials say it’s rare. Children’s advocates note that many low-income families might not know where to turn for help and simply give up.

Erik’s parents — Tara Mendola, a Ph.D. student, and Ari Friedman, an M.D.-Ph.D. student — had no intention of giving up, eventually involving Gov. Tom Corbett’s office to secure coverage for their son.

“It just felt like only someone with both privilege and a lot of free time could get into this program,” said Mendola, who, with her husband, documented each contact and recounted the case in an eye-opening article for the journal Health Affairs.

Amid their frustration, the couple wrote hopefully of coming changes mandated by the federal health care overhaul that are intended to streamline states’ approval processes for public insurance. But those changes will coincide with a tsunami of newly covered patients expected to hit on Jan. 1.

That’s when hundreds of thousands of Pennsylvanians become eligible for coverage bought through the online insurance marketplace, or an “exchange,” and at least 100,000 more who were already eligible for Medicaid are expected to apply for the first time due to the hoopla. (The legislature has so far rejected an optional Medicaid expansion; acceptance would add a half-million more enrollees.)

In Harrisburg, the sprawling state agency that was primarily responsible for little Erik’s insurance odyssey — the Department of Public Welfare — also handles Medicaid, and its county assistance offices are often the initial contact for CHIP.

Erik’s parents were eager for CHIP coverage. Its full benefits, from commercial insurers, include prescription drugs, dental, and vision, with no deductibles and doctor copays up to $15; preexisting conditions aren’t considered.

CHIP is universal in Pennsylvania: Any citizen, even Bill Gates’ family if they lived here, can qualify, but premiums are based on income, with wealthier parents paying the full $270 monthly cost for each child. It now covers 187,000 children.

Ari Friedman applied for insurance online two days after his son was born in April 2012. When he called the next week to follow up, he was told that the application — eight pages, plus reams of documentation — was lost and that he should reapply. He did so immediately, and then called to check again.

On hold, the phone system cut him off. It happened a second time, and a third, and on and on, sometimes after 30 seconds and other times 20 minutes. No voice mail. No person. Just random hangups. “It is like being a rat in a cage. Wait and then they shock them,” said Friedman.

Eventually, he called the state CHIP office. Someone answered, but had no access to the application.
Pennsylvania has a joint application for CHIP and Medicaid, which covers the lowest-income children. Applications are routed to one or the other, depending on income. So the couple wasn’t surprised when a letter a few weeks later said Erik was ineligible for Medicaid. But it didn’t mention CHIP.

“After dozens of phone calls,” the couple wrote, they were told that CHIP hadn’t been considered because the necessary documentation — sent both by fax and attached to an e-mail — had been lost again. They were told to send it a third time.

They bought catastrophic insurance for Erik, then 44 days old.

He was rejected for Medicaid again. This time, they learned, the file had been flagged with a code “69” — odd since a DPW worker told them, the code didn’t exist.

She sent a ticket to the district office giving it three days to resolve the case. Nothing happened.

Recalling the whole experience recently as Erik, now 15 months, squealed with delight at his newfound ability to run around their West Powelton rowhouse, Friedman and Mendola, both 29, don’t come across as angry. Eighth-grade sweethearts in Alabama who ended up at the University of Pennsylvania, they are warm, easygoing, and organized.

He is a fifth-year student in health economics, alternating between Penn’s medical and business schools. She is a sixth-year graduate student in comparative literature at New York University, back in Philadelphia after extensive travel on a Fulbright scholarship and national security grant (she specializes in medieval Arabic and French literature).

They said they resisted an editor’s entreaties to put more emotion in the journal article because, as Mendola put it, “other people have it worse.”

Through the months of frustration and systemic breakdowns, they wrote, “the individual caseworkers and employees we reached were empathetic and kind.” Yet no one seemed surprised.

At three months, with no luck by phone, fax, or e-mail, Friedman looked up a state Medicaid office in the city and bicycled over, hoping to see a supervisor. He found a demolished building.

But that attempt, the result of an old address listed on a website that may not have been affiliated with the state, led to a meeting with “a wonderful employee” who promised to move the case forward. The next day, their third rejection letter arrived — great news, since this one said the file had been sent for consideration to Keystone Health Plan East, a CHIP contractor.

A Keystone representative moved quickly, sending it to the state Department of Insurance, which oversees CHIP, and advising the couple to let Erik’s catastrophic insurance lapse because he had to be uninsured to qualify.

This was incorrect; infants are exempt. But his parents reluctantly complied. Fearful that “the one concrete way we had to protect our son’s health and our financial security was being taken away,” they wrote every politician they could, attaching a photo of their 4-month-old to make him harder to ignore.

Gov. Corbett’s office called within a week. A letter of approval from CHIP, referencing that contact, arrived three days later. It tripled their income — $45,000 in stipends — and as a result multiplied their premium eightfold.

By the time their pay stubs were reconsidered and Erik was enrolled at the correct $30 premium, he was 6 months old.

A top CHIP official called to apologize and backdate the policy two months. That still left $2,000 to $3,000 in past costs, but they were too embarrassed to ask for more.

Neither Keystone’s parent, Independence Blue Cross, nor the agencies would discuss the case, citing privacy laws, but all said they try to do better.

“If the child already has health insurance, IBC does not advise parents to drop that coverage or let it lapse,” spokeswoman Ruth Stoolman e-mailed, without denying that it had happened.

Press secretary Rosanne Placey said the Department of Insurance did a “thorough review” of the case, although the application apparently did not reach the agency until the governor’s office intervened. “[I]t is never acceptable to keep parents on tenterhooks regarding their baby’s coverage and care,” she said via e-mail.

At the Department of Public Welfare, press secretary Carey Miller wrote: “This couple’s story is by no means indicative of the experience we strive to provide on a daily basis.”

Ari Friedman’s single-biggest grievance, that phones in DPW’s Philadelphia offices hung up repeatedly while on hold, a common complaint from clients and advocates, drew this from Miller:

“Unfortunately, DPW does not have the capability to track phone system errors, but we are always working towards providing the best possible customer service experience.”

With the Affordable Care Act certain to substantially increase DPW’s workload and require major shifts in procedures by Jan. 1, Miller said the department was training staff on new IT systems and mandatory eligibility changes, and hiring new workers. She said a job fair will be held July 18 in Philadelphia to recruit more caseworkers.

Little Erik Friedman’s insurance is in the process of being renewed. His parents think CHIP is great.

There is more about their experience — yes, there’s more — in an article in the journal Health Affairs.

How Baby Erik Got Health Insurance