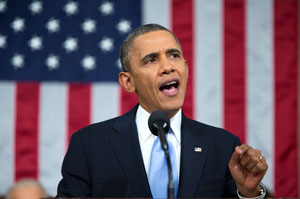 President Barack Obama delivers the State of the Union address in the House Chamber at the U.S. Capitol in Washington, D.C., Jan. 28, 2014. (White House Photo by Pete Souza)

That total is important to supporters as a sign that the law is working — and as an indication of the difficulties Republicans would face to rescind the law or roll back certain provisions. Critics have pointed out that 9 million isn’t a huge number — and that some of those people, perhaps even many of them, were previously insured.

Here’s the breakdown supplied by the administration: 3 million have signed up for private plans through the federal and state health exchanges since they opened for enrollment in October. Another 6.3 million have been deemed eligible for Medicaid in the past three months of 2013.  In addition, the administration had previously said that 3 million young adults under age 26 have been able to stay on their parents’ plans under the law.

Let’s parse those numbers a bit:

1) The 3 million enrolled in private coverage

A surge in late December and early January helped push enrollment totals to about 3 million despite the troubled rollout of the federal exchange and some state marketplaces. It puts sign-ups almost halfway to meeting the Congressional Budget Office projection that 7 million  would sign up the first year with another two months left to go in open enrollment.

What’s not known is how many of those 3 million have actually paid their first premiums, which is a requirement to become covered.  So the number could be less. On the flip side, it also isn’t known how many people bypassed the federal and state marketplaces and signed up directly with insurers, so the number could be higher.

And the administration has released only limited information on enrollees. Are they mainly the sick, who are clearly more motivated to enroll despite the difficulties with the websites? Or is it a good mix of the healthy and the sick?

Data released by the administration earlier this month showed that 33 percent of enrollees were ages 55 to 64, while 24 percent were 18 to 34.

While advancing age is generally associated with more health problems — and higher costs — there is no way to tell the health status of enrollees. The law bars insurers from denying applicants with health problems, so no questions about past issues are asked. As a result, whether insurers have correctly calculated the costs — and set their premiums accordingly — won’t be known until well into the year when actual claims costs can be analyzed.

Is the law reducing the number of uninsured, which was one of its main goals?

Some reports, including a McKinsey study cited by the Wall Street Journal, have said few of those enrolling were previously uninsured.

Using an online survey of 4,500 people who were uninsured, bought their own coverage or said they were losing job-based plans, McKinsey estimated that most people who have enrolled were renewing or replacing existing policies. This follows a spate of news stories about people who sought to buy coverage only after learning that their existing individual policies were not being renewed because they failed to meet some of the law’s requirements.  Only 11 percent in the McKinsey survey reported they were uninsured in 2013.

No one knows if the sample used by McKinsey accurately reflects those who have signed up.

Still, the McKinsey report offered some cause for optimism for the law’s backers, noting that of those who had not yet enrolled, 26 percent said they intended to do so. The majority of those respondents said they were uninsured. “This suggests a higher percent of prospective market growth from those previously uninsured” if issues such as cost and website problems can be addressed, the report said.

The most telling tabulation of whether the law reduced the number of uninsured won’t come until well into 2015 when the Census Bureau releases figures for 2014.

But remember those under-26-year-olds? The provision allowing them to stay on their parents’ plans went into effect in 2010. The census has reported a drop in the uninsured rate among 19-25-year-olds since then, even as the rate for 26-34-year olds remained stable.

2) The 6 million enrolled  in Medicaid

What’s not clear from the Medicaid sign-ups cited by the administration is how many of those were renewing coverage or were qualified under the old rules, compared with how many are new under the federal law’s expansion.  Under the law, states can expand coverage to all those under 138 percent of the federal poverty level, about $26,951 for a family of three, with the federal government picking up 100 percent of the cost for the first three years.

Half the states and the District of Columbia have expanded their Medicaid programs to cover more people. Many states are keeping the old rules for Medicaid, which often do not cover adults without dependent children, no matter what their income level.

So, 9 million Americans may well have signed up, but a lot remains unknown about who they are. Supporters and critics alike will use the figures anyway, but it will be a while before a full assessment of the law’s effect can be reliably made.