As some Republicans distance themselves from the unpopular House-passed budget that would radically change the Medicare program, the conservative seniors group 60 Plus isn’t backing off. If anything, it is injecting new energy  and money – into its defense of the Republican plan.

60 Plus has retained the Black Rock Group, a public relations firm, to keep its message in focus. And 60 Plus’ celebrity spokesman, crooner Pat Boone, today released a statement promising to “lace up my white shoes and spread the news far and wide that this administration is trying to mislead and scare seniors.”

The Medicare proposal would raise the eligibility age to 67 and convert the program from a government-run, guaranteed-benefit system to one in which seniors get a set amount of money to buy private health insurance.

But as the mudslinging grows intense over the Medicare proposal, which was crafted by House Budget Committee Chairman Paul Ryan, R-Wis., polls show that the public is confused.

Indeed, while the rhetoric from Democrats would have seniors believe that the plan would destroy Medicare, 60 Plus and other supporters say it would save the program. Here’s a look at some of Boone’s claims.

The claim: “Rep. Ryan’s budget will not end Medicare. Instead, it will preserve the offerings of this program for our children and grandchildren.”

Closer look: Without a doubt the program that currently provides health care coverage to 47 million older and disabled people would be fundamentally altered.

Currently, Medicare covers most of the cost of whatever services patients use. Under the Ryan plan, seniors would get a set amount of money to buy private insurance, which might not cover the same benefits that Medicare currently provides. These changes wouldn’t apply to those now 55 and older, but everyone else would pay significantly more out of pocket than seniors currently pay once they become eligible, according to the Congressional Budget Office.

While those who are now 55 and older would continue to get benefits under the current system, they also would lose some services because Ryan would repeal last year’s health law. For example, the law closes Medicare’s doughnut hole, a gap in prescription drug coverage, and adds annual wellness visits as well free preventive services such as cancer screenings.

The claim: Boone also says Ryan is “not proposing to take $500 billion out of Medicare  that’s President Obama’s plan!”

Closer look: Actually, while Ryan would kill the health law, it would retain the $500 billion (over 10 years) in Medicare savings called for in the law, money that comes from cutting some payments to hospitals and cutting some funding from the Medicare Advantage program. That could force insurers to do away with some extra benefits that Medicare doesn’t require, such as hearing aids and eyeglasses.

Ryan says he would reinvest those reductions into Medicare, while the health law does not. 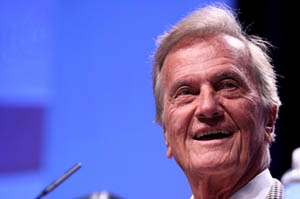 Democrats claim that there is no evidence in the budget of such a reinvestment. JD Foster, senior fellow at the Heritage Foundation, a conservative think tank, says that doesn’t matter. He says that the money would simply stay in the system and result in larger premium help for beneficiaries. “From a budgetary standpoint, this is one of the easier things to do,” he said.

Closer look: This charge has resonated throughout conservative and Republican circles. They point to one recent video produced by a liberal group circulating online featuring what the viewer is supposed to believe is Ryan pushing a old woman in a wheelchair off the edge of a cliff while she screams in terror. And the Democratic Congressional Campaign Committee has been targeting Republicans who voted for the plan, with ads accusing them of voting to end Medicare.

In fact, under Ryan, the plan is for the basic Medicare program to remain as-is for anyone in it now, or going into the program by 2022. And even after that, seniors would still be covered in some way under the Ryan plan.

The tug-of-war over Ryan’s budget is likely to grow as next year’s election nears and both parties woo the ever-important senior vote. Exit polls from the 2010 congressional election showed that seniors favored Republicans by 21 percentage points, according to Democratic pollster Celinda Lake. But since the House passed Ryan’s budget, the GOP’s advantage with seniors has narrowed to 10 percentage points, she said.