Nearly forty percent of hospital-based general practitioners who are responsible for overseeing patients’ care say they juggle unsafe patient workloads at least once a week, according to a study published Monday as a research letter in JAMA Internal Medicine.

In the study, researchers at Johns Hopkins University invited nearly 900 attending physicians, known as hospitalists, to complete an online survey that measured various characteristics, including the number of patients they thought they could manage safely during a typical shift.  Hospitalists are the physicians who coordinate a patient’s care and medications among various specialists while they’re in the hospital and oversee their transition home. 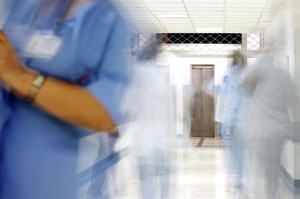 Among the 506 doctors who completed the survey, forty percent reported that their patient workloads exceeded levels they deemed safe at least once a month. Thirty-six percent said they exceeded their own notions of safe workloads more than once a week.  And nearly a quarter believe their workloads negatively affected patient outcomes by preventing full discussion of treatments.

“We know that with increased pressures from the health care system, with decreased reimbursement, present restrictions on work hours, and a focus on patient flow, that there is the concern that attending physician workload has increased,” said Dr. Henry Michtalik, an assistant professor of medicine and the study’s first author.

Michtalik and his colleagues also found that more than 20 percent of survey respondents believe their workload likely resulted in negative outcomes for patients by contributing to patient transfers, complications and even death. Twenty-two percent said they’ve ordered unnecessary procedures, consultations, and other tests due to time constraints.

The study authors acknowledged, however, that the respondents were self-selected and they had no way of confirming whether the  doctors’ perceptions of risks correlated with actual risks.

“With an increased amount of patients into the health system, if there is an underlying issue with work load, we can expect it to get worse,” Michtalik added in an interview.

Though the findings don’t surprise Dr. Eugene Litvak, the president and chief executive officer of the Institute for Healthcare Optimization, a nonprofit research group, who said he thought the study was overdue. “It may be common sense, but it’s important to have data to support it,” he said in an interview.

According to Litvak, physicians at hospitals across the country are regularly subjected to highly fluctuating patient demand.  “Those peaks [in demand] are mostly artificial in nature … and are the result of our mismanaged patient flow. Smoothing those peaks is the only alternative to reducing physician workloads short of hiring more physicians.”

“In actuality,” he said, “we may be focusing on a pennywise strategy, where we’re actually causing pounds of increased cost because of additional unnecessary testing, decreased discussions, and a paradoxical increase in costs.”