Consumer-driven medical spending may be the second-biggest story in health care, after the Affordable Care Act. As employers give workers more “skin in the game” through higher costs from purse and paycheck, the thinking goes, they’ll seek more efficient treatment and hold down overall spending.

But consumers may not have as much skin in the game as experts thought, new government figures show.
Despite rapid growth in high-deductible health plans and rising employee contributions for insurance premiums, consumers’ share of national health spending continued to fall in 2011, slipping to its lowest level in decades.

“I’m surprised,” says Jonathan Gruber, a health economist at the Massachusetts Institute of Technology. “All the news is about the move to high-deductible health plans. Based on that logic … I would have expected it to go up.”

But from a wider perspective, consumer health costs continued a trend of at least a quarter-century of taking up smaller and smaller parts of the health-spending pie. Household expense did go up. But other medical spending rose faster, especially for the government Medicare and Medicaid programs. 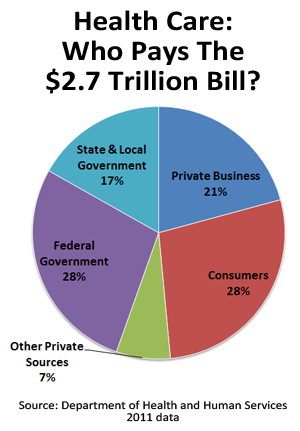 Economists measure three kinds of consumer health costs: insurance premiums paid through payroll deductions or for individual policies; out-of-pocket costs for deductibles and co-pays; and Medicare payroll taxes. Such outlays fell to 27.7 percent of the health care economy in 2011, down from 28 percent in 2010 and from 32 percent in 2000, according to the national health expenditures report issued by HHS last week.

That’s in spite of the fact that one worker in three is covered by a plan with a deductible of at least $1,000, up from one in 10 in 2006, according to the Kaiser Family Foundation. (KHN is an editorially independent program of KFF.) Among small firms, half the workers are now in high-deductible plans.

One factor holding down costs even for families with consumer plans has been patent expirations for expensive, commonly used medicines such as Prevacid and Flomax.

“People these days are spending a lot less out-of-pocket on prescription drugs,” said Peter Cunningham, director of quantitative research at the Center for Studying Health System Change. “A lot of that has to do with the shift from brand name to generics.”

Nobody thinks consumer-driven medicine has run its course. Insurers and employers are still building tools for patients to shop for care by comparing costs for MRI scans, for example, or researching hospital quality records.

High-deductible plans are expected to win a large share of the business sold next year through the health law’s state insurance exchanges. Many companies say they intend to offer high-deductible insurance — especially plans with tax-favored health savings accounts — as the only option.

“I’ve heard of nothing but acceleration” of employers into consumer-directed health insurance, said Roy Ramthun, a benefits consultant who was a senior health policy advisor in President George W. Bush’s administration. “More local units of government, school districts and even some union plans are starting to move more aggressively into these areas.”

High deductible plans are already getting credit for helping with an overall slowdown in medical spending growth. Among other factors, economists suspect that the prospect of higher wallet costs has made consumers even more likely than usual to avoid doctor visits in the middle of a sluggish economy. (Public health officials fear this will backfire with a later spike in illness.)

Sooner or later, households’ share of the medical-cost pie will start to get bigger, analysts say. The declines have been getting smaller, suggesting the trend will reverse.

Even with recent tax increases on high-income households, the huge Medicare program for seniors and the disabled is growing at an unsustainable pace, says Joseph Antos, a health economist at the pro-markets American Enterprise Institute. That means Medicare, too, will need to seek higher premiums, deductibles or co-pays from the patient’s pocket, he said.

Who Knew? Patients’ Share Of Health Spending Is Shrinking