Kate and Scott Savett were trying to be responsible when they needed some medical care. They live about an hour north of Philadelphia with their dog, Frankie. Scott, 43, is a chemist and designs software for labs; Kate, 37, works in life insurance.

They buy their health insurance through Scott’s work, and, to keep their monthly costs affordable, they chose a plan with a high out-of-pocket maximum. They understood from the beginning that this would mean shopping carefully when they needed care, because costs can vary a lot among doctors and hospitals.

For years the couple didn’t use their insurance much — but that all changed this year.

Kate was diagnosed with multiple sclerosis in January. Doctors did a lot of tests and then follow-up tests. On top of that, Scott needed some imaging tests for a spinal issue.

Under their insurance plan, the two have to pay in full for the first $3,000 of their combined care. After that, they still have to pay 20 percent of the cost, until they reach a total of $8,000 in out-of-pocket expenses.

That knowledge made them want to find the best care for the best deal. But how?

They investigated, using an online cost estimator offered through their insurance company. 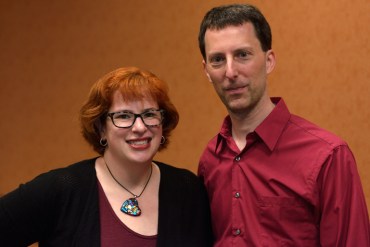 Kate and Scott Savett, of Allentown, PA, at an event of the Greater Delaware Valley chapter of the National MS Society, in Philadelphia, PA. (Photo by Bastiaan Slabbers for NPR)

Scott logs in to use the tool, and searches for the typical cost of MRI scans in his region. The online calculator tells him the average cost is $1,270; the lowest is $512 and the “above average” is $1,790.

The tool then produced a list of different providers and an estimate of how much they will specifically charge under the plan the Savetts have.

At first, this kind of information seemed great to the couple. But it quickly proved to be a headache.

A few days before Kate was scheduled to have her first MRI, she and Scott got a call from the radiology office, saying that the scan would cost them $2,400. They were shocked — the online calculator had told them it would only be about $500.

What’s the source of the discrepancy?

A hospital had bought the imaging center and raised the price.

There were misquotes on other procedures, too. The Savetts received some bills from health providers that were as much as a thousand dollars higher than the price the online calculator had led them to expect. Another time, they couldn’t find any listings at all for a procedure one of them needed.

The two quickly plowed through their $3,000 deductible. Financial planning became increasingly difficult. They delayed buying a new water heater for their house.

“It’s hard for us to pull the trigger on that, knowing that another [medical] bill could be coming around the corner,” Kate says.

It’s unclear how common these inaccuracies with online estimators are, but the tools are becoming more popular, as patients shoulder a bigger share of the cost of their medical care. Outside companies are developing the online calculators, and most insurers offer them.

“Each one of them — whether it’s Aetna, United, Cigna — they all have something,” says Francois de Brantes, the director of the Health Care Incentives Improvement Institute, a nonprofit based in Connecticut. De Brantes has been paying close attention to price-transparency tools.

“There’s lots and lots of variability in the information that’s provided to consumers,” he says.

Some of the estimators reflect an aggregate range of possible costs; others are based on historic pricing, or claims data from varying sources. Many, he says, are limited in the type of procedures they include.

As for United Healthare’s cost estimator — the one the Savetts used — Craig Hankins of UHC gives it an 8 out of 10 in terms of accuracy.

“Right now, I would say if we look at our tool, relative to others that are offered, I would say ours is average — if not above average — in terms of breadth of services as well as accuracy,” Hankins says.

UHC’s cost calculator is based on current information, he says, adding that it is in the insurer’s interest to have the online tool work. If members get care at an acceptable cost, that saves everyone money.

But, he says, the tool has limits — it’s hard to predict what a particular doctor will actually do during an exam, treatment, or office visit, and how he or she will bill for it.

That gets at a deeper challenge with these online estimators, says David Newman, director of the nonprofit Health Care Cost Institute, in Washington, D.C. The way billing and reimbursement works in health care is extremely complicated, he says.

“There are 8,000 procedure codes, tens of thousands of diagnostic codes, a million different providers, and hundreds of insurance companies,” says Newman. Calculators are often based on one specific procedure, so they may not reflect all that happens and is billed for during a visit. In that way, he says, “this is probably going to be as good as it gets.”

But de Brantes thinks much more improvement is possible.

The information people like the Savetts are seeking exists in the health care system, de Brantes says, even if in some cases it is hidden behind contract agreements. The bigger problem, he says, is that there is no internal pressure to make the online calculator work as well as it could. Health care has thrived in an opaque environment where costs are hard to find.

But the needle is starting to move. Employers are demanding these tools for their employees. And several states mandate public reporting of price information.

As for Scott and Kate Savett, the current climate has turned each of them into a new breed of health care consumer: a savvy one.

Scott says he knows they are approaching their $8,000 out-of- pocket cap for the year, which means insurance will soon cover the entire cost of their care. But he doesn’t want to give in. He wants to see improvements.

“I would rather crawl to that $8,000 cap than sprint to it,” he says. “I know we’re going to get there this year, unfortunately, but to blow it all on an MRI that’s excessively priced rubs me the wrong way.”

A few weeks after we first talked, Savett received a bill for his MRI. Turns out, it’s pretty close to what the estimator predicted it would be — $1,100. He says he will keep using the tool; but he sees it as an imperfect clue rather than a price tag.

This story is part of a reporting partnership that includes WHYY’s The Pulse, NPR and Kaiser Health News.

Patients Want To Price-Shop For Care, But Online Tools Unreliable