Dementia took over Pauline Finster’s 91-year-old mind long ago and she may die without having another real conversation with her daughter.

After Finster broke her hip in July 2015, Jackie Mantua noticed her mother’s speech ebbing until she only said “hi,” or that she felt fine. Mantua last heard Finster speak six months ago.

Finster’s hip surgery led to a series of medical interventions that left her with poor circulation in her legs. Then gangrene set in. Mantua won’t look at the dead tissue on her mother’s right foot that is now creeping from the toes to heel.

She has instructed the staff at the AlfredHouse assisted living home in Rockville, Md., where her mother has been in hospice care since earlier this summer, to keep Finster on Tylenol to hold back the gangrene’s discomfort.

Is that enough? It’s really all she can do for her mother at this point, Mantua said.

Hospice’s purpose, at least one of them, is to ease a dying patient’s pain at the end of life and improve the quality of that life. But what’s to be done when a dementia patient in her waning days can’t communicate her pain or help identify the cause? Or resists taking medications?

All those concerns can be troubling for family caregivers for loved ones with dementia and in hospice care, according to a recent study in the American Journal of Alzheimer’s Disease & Other Dementias.

Families often describe a cancer patient’s last months as stressful but meaningful. That isn’t the case with dementia patients because the disease changes the patient’s personality and causes behavior issues, according to George Demiris, one of the study’s authors and a professor of biobehavioral nursing and health systems at the University of Washington’s School of Nursing.

Caregivers who took part in the study said they worried that their loved ones were in pain, but unable to properly express it — and that possibility disturbed them, according to interviews with families taking care of dementia patients in their last stage of life.

Multiple participants described feeling frustrated and defeated by patients’ cognitive difficulties and changing emotions, the study reported. Some described the patients as “prisoners” inside their bodies.

Helping a dementia patient in pain can be challenging for hospice care providers, too.

Previous research, cited in the recent study, found patients with dementia were prescribed lower doses of opioids than patients with cancer with similar pain scores.

Other research cited found that hospice nurses caring for such patients frequently asked relatives to interpret patients’ “pain signals” to help them assess pain. For example, one caregiver knew her mother was in pain when she moved a certain way in her chair. Another recognized his wife was in pain when a home health care aide gave her a bath by observing how she squeezed the aide’s hand.

Sometimes, patients gasp for air or repeatedly touch the same part of their bodies.

Mantua said she watches her mother’s face and stays vigilant for winces or grimaces. Her face is still expressive, Mantua said. Still, there are no words, only moans to indicate something is wrong.

Recently, Mantua said her mother has been acting “strange.” Instead of her usual vacant but happy smile, Finster looked at her daughter with a “horrified” expression. Mantua told the hospice chaplain that it looked like her mother had seen the devil.

“You have no idea because she can’t say anything,” Mantua said. “I was saying ‘What’s wrong? What’s wrong?’ and she’s just looking at me like crazy.” 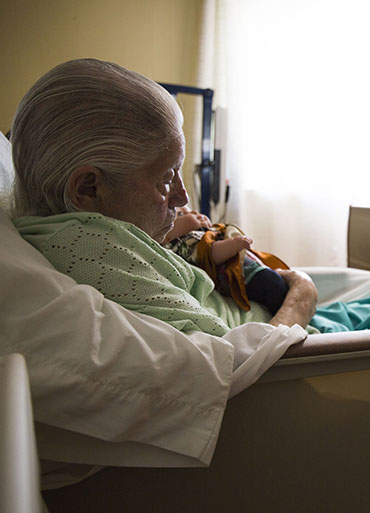 Finster, 91 years-old, is rarely awake for more than a few minutes at a time. (Francis Ying/KHN)

Finster has had dementia for 10 years. She has spent most of that time in facilities with increasing levels of care, moving from an independent living facility, to assisted living to memory care. Mantua has felt some of the frustration that caregivers of other patients with dementia have experienced. Three or four years ago, when Finster still  had a phone in her room, she sometimes called her son Les — Mantua’s older brother — 10 times to leave him the same message that people were coming into her room and stealing her food. She simply forgot that she had called before.

Finster’s years of cognitive decline have taken a toll on Mantua and her family.

“You get to the point you want them to die because it’s hard,” Mantua said. “It’s hard to deal with. It’s a very helpless feeling.”

Now 53, Mantua is a mother of three children between the ages of 27 and 31 and grandmother to twin five-year-old boys. She said she doesn’t have the patience or natural caretaking abilities to tend to her mother full time.

It comforts her to know that her mother is looked after by a trained staff 24 hours a day, but for families who find themselves as the primary caregivers for dying dementia patients, the job can lead to anxiety, depression and grief, according to the recent study.

“Caregivers stated that patients were combative because they could not understand that interventions were meant to help them, or that they forgot about past pain and so rejected attempts at assessment and treatment,” the study said.

For families, a loved one with dementia can become like a stranger who grows angrier and more aggressive than the person they remembered, said Demiris, which “complicates the caregiving experience.”

Pauline Finster isn’t aggressive anymore. Mantua remembers when Finster’s dementia made her paranoid and angry. She was once so combative, the staff at her former assisted living facility wouldn’t try to feed her unless Mantua or her brother were present.

The decision to begin hospice care wasn’t easy for Mantua or her family.  She said it feels like her mother is already gone.

There isn’t much for Mantua to do when she visits her mother at AlfredHouse. She chatters as Finster dozes, cradling a baby doll that is always with her. Someone at the assisted living home regularly changes the doll’s clothes, which amuses Mantua.

For now, she keeps driving an hour once every other week from her home on Maryland’s Eastern Shore to Finster’s room in Rockville where they wait for the end together.