When John Uit de Flesch was uninsured last year, his children’s vaccines were covered by the state.

When he took the children for shots this year, he produced the Medi-Share card he’d gotten to comply with the Affordable Care Act mandate that everyone must have health coverage. He was billed $1,080 for shots and checkups for his two tots.

Uit de Flesch (pronounced “ite-de-flesh”), pastor of Every Nation Baptist Church on Charlotte’s North Tryon Street, says he feels like he’s being penalized for obeying the law. “As a Christian I don’t believe it’s right to disobey the government,” he said.

But he doesn’t actually have health insurance. Instead, he’s among a small but growing number of Christians joining health care sharing ministries, in which members agree to abide by Christian lifestyle principles and contribute to each other’s medical expenses. 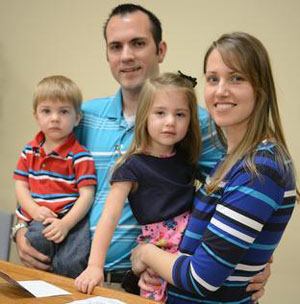 John Uit de Flesch is among a small but growing number of Christians joining health care sharing ministries, in which members agree to abide by Christian lifestyle principles and contribute to each other’s medical expenses. (Photo by T. Ortega Gaines/Charlotte Observer)

Coverage is literally a matter of faith. Organizers make it clear there are no guarantees and no government oversight. Members depend on each other’s commitment to provide help when it’s needed. Those allowed to join must agree to religious beliefs and lifestyle standards, which can include limits on sexual behavior, drinking and use of drugs and tobacco.

As with insurance, they make monthly payments, though they’re called shares rather than premiums, and pay a fixed amount out of pocket, much like deductibles. Methods of getting that money to members with covered medical bills vary: Some ministries handle the billing, while one oversees a system in which payments are sent directly from one member to another.

The ministries say the federal insurance mandate has driven up membership in the past year, in North Carolina and across the nation. The three that responded to the Observer’s request for numbers (Liberty did not) have a combined membership of about 325,000 nationwide.

That’s tiny compared with roughly 170 million people who have private insurance and 101 million on Medicare, Medicaid or other public coverage. In 2014 more than 7 million people bought insurance through the ACA exchange.

For many local doctors, that makes patients like the Uit de Flesches a new twist in an already complex coverage scene.

“We’ve really only seen a few of these,” said Chris Kiser, vice president of patient financial services for Carolinas HealthCare System.Novant Health said it has just over 200 Medi-Share patients in the four states it covers.

The growth spurred by the ACA could be a mixed blessing, says one expert.

The ministries have built a record of honoring their claims, but that could be jeopardized if new members don’t show the same commitment as those who joined earlier, says Gary Claxton, vice president for the Kaiser Family Foundation and a former insurance regulator.

“If you’re just doing it because you don’t want to buy health insurance or you don’t like President Obama, that’s not the purpose of these groups,” Claxton said. “If they’re growing rapidly, they have to be vigilant about finances,” such as ensuring that enough money comes in to cover bills for growing membership.

Cost-sharing ministries predate the ACA by decades. Founders share a belief that the church should be the source of support for fellow Christians. A verse from Galatians, “Carry each other’s burdens and so fulfill the law of Christ,” is often cited.

Participants share a desire to avoid subsidizing abortion and health care costs that stem from living outside a Christian lifestyle, such as issues related to extramarital sex and drug or alcohol abuse.

To be accepted, members must profess a belief in Jesus and a willingness to abide by the rules. A faith leader might be required to vouch for them.

Once accepted, members commit to a monthly “share” that’s used to pay bills for members with medical expenses that meet each ministry’s guidelines. Payments, deductibles (which go by different names) and methods of handling the money vary by ministry.

The mutual support goes beyond money. Prayers for members in crisis are central to the mission.

“The community aspect is huge,” says Anthony Hopp, director of member development for the Illinois-based Samaritan Ministries. The ministry manages a database that matches promised payments with covered costs, and each member gets a notice instructing them on where to send that month’s “share.” Those payments usually arrive with notes, cards and promises of prayer, Hopp said.

Robyn and Spencer Hoffman of Charlotte joined Medi-Share in 2009, after Spencer, a homebuilder, lost his job and his company insurance. The monthly share, which was lower than insurance premiums, is what attracted them, Robyn Hoffman says, but they also liked working with a group that “lines up so much with our values.”

Medi-Share paid for a complicated pregnancy and delivery, and Robyn Hoffman said every phone call ended with someone asking if she’d like them to pray with her. While encounters with insurance companies were often adversarial, she said, the ministry feels supportive.

Five years later, the Hoffmans and their three children remain on Medi-Share. They were relieved the ACA didn’t force them to switch. “It just honestly feels good to know that you are helping others while you’re paying a bill that we all have to pay,” Robyn Hoffman said.

The ACA, with its mandate for individuals to get health insurance or pay penalties, infused new energy into the ministries.

Along with an exemption for religious groups such as the Amish that object to insurance, the act exempts members of recognized cost-sharing ministries that have been in existence since 1999.

“In the months leading up to the March 31 deadline, tens of thousands of Christians opted for faith-based insurance alternatives,” Christianity Today reported in April. For Medi-Share, the increase was close to 50 percent.

Although the ministries have similarities to health insurance, the differences are crucial and can have big financial impacts for families such as the Uit de Flesches.

John Uit de Flesch says he made a little more than $14,000 as a pastor last year, with a housing allowance that would bump his compensation to $20,000 to $25,000. Had he bought insurance on the federal exchange, he would likely have qualified for subsidies to cover most of his premium and out-of-pocket costs.

But Uit de Flesch says he doesn’t like taking government aid or paying premiums that would contribute to coverage of sexually transmitted diseases and alcohol-related ailments. He chose the Medi-Share plan that requires him to cover the first $10,000 because he said that’s all he could afford.

Many employers and individuals are also moving toward high-deductible insurance policies to control costs. But the ACA mandates full coverage of many preventive services, including the well-child checkups and inoculations that led to Uit de Flesch’s $1,080 bill.

Ministries, on the other hand, generally exclude such coverage as part of the emphasis on responsibility. The thinking is that members can budget for routine care, while other members kick in to help with unexpected costs.

Uit de Flesch said he’s not complaining about the plan he chose. But he’s frustrated by a statement at the bottom of the bill from his children’s pediatrician, who is part of the Novant network: “Novant Health provides free care to uninsured patients with incomes of up to 300 percent of the federal poverty level.”

With a federal law requiring insurance or an approved alternative, “to say that is to say they only offer charity to lawbreakers,” Uit de Flesch said.

Novant and Carolinas HealthCare both say Medi-Share is especially challenging because even though it is not insurance, it has so many similarities that both systems treat patients as insured. For instance, Medi-Share contracts with Private Health Care Systems, a managed care network.

“As such, when a Medi-Share patient visits a Novant Health facility and presents a PHCS insurance card, the patient is treated as insured,” a statement from Novant says. “Patients with insurance do not qualify for charity care unless there are unusual circumstances for medically necessary services leading to a catastrophically large balance.”

Uit de Flesch took his children for vaccines in July. In November, after the Observer and Medi-Share contacted Novant about his case, he says the pediatrician wrote off the vaccine charges, leaving him to pay about $400 for the well-child checkups.

The ministries currently operating have a good record, says the Kaiser Family Foundation’s Claxton. But there have been past problems.

In the late 1990s, leaders of the Christian Brotherhood Newsletter, a predecessor of Christian Healthcare Ministries, diverted millions of dollars of donations to their own pockets, leaving $24 million in claims unpaid, Christianity Today reported.

And some states have tried to block the ministries, calling them unlicensed insurance companies. Twenty-six states, including North Carolina, have now passed laws exempting the ministries from insurance regulations.

The ACA’s requirement that ministries must have been in operation since 1999 to qualify for the insurance exemption reduces the chance of untested or untrustworthy groups popping up to offer alternatives, Claxton says. But he warns that consumers should still be alert to possible scams: “If there’s a loophole, there will be bad people who try to exploit it.”

The most important thing is for prospective members to understand exactly what they’re signing up for. Dr. Andrea Miller, an executive with Medi-Share, says the group isn’t trying to enroll people who just want cheap insurance. Staffers work to explain the spiritual benefits and the financial trade-offs.

“We want people for whom this is a very good fit,” she said.